Anton Herashchenko, an adviser to the Ukrainian interior minister, published on Facebook that Buzyna was killed on Thursday afternoon by shots from a passing car.

He also underlined that Buzyna was a key witness in a criminal case related to a pro-Russian rally in Kyiv organized to counter the massive pro-Western protests on Maidan square. The protests eventually led former President Viktor Yanukovych to flee the country in 2014.

"It seems the shooting of witnesses of the Anti-Maidan affair continues," Herashchenko said in his Facebook post. 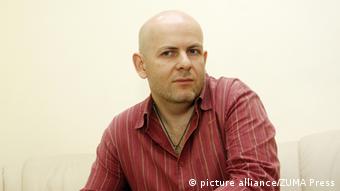 Oles Buzyna had a short stint as Segodnya's editor-in-chief

The shooting comes a day after Oleg Kalashnikov, a lawmaker from Yanukovych's Kremlin-friendly party, was found dead on the landing of his home in Kyiv.

The minister said the killings "could be" orchestrated by Russia in order to "destabilize the situation in Ukraine from within."

Oles Buzyna, 45, was a supporter of ex-President Yanukovych. Buzyna was known for his pro-Russian opinion articles published in a leading daily, which belongs to the media empire of Ukraine's richest businessman, Rinat Akhmetov.

Akhmetov and Buzyna ran in last year's election for a parliamentary seat for the Russian Bloc party, but they were not elected.

Russian President Vladimir Putin referred to Buzyna's death in his annual call-in show, saying that this murder had been politically motivated.

"This is not the first assassination. There is a whole series of such killings in Ukraine," Putin said.

Kyiv officials say six soldiers have been killed in fighting in separatist-held eastern Ukraine. They are the heaviest losses for government forces in the last ten days. (14.04.2015)

After more than four hours of talks in Berlin, Russia and Ukraine have agreed to the withdrawal of more weapons from eastern Ukraine. The talks took place amid renewed violence in the region. (14.04.2015)