More than nine months, 2,000 airstrikes and 3,000 military advisers later, Congress still has not authorized the US war against the "Islamic State." The White House now wants to deploy 450 advisers closer to the front. 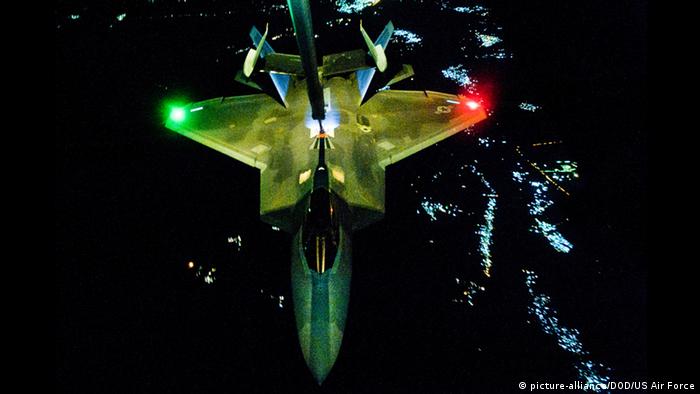 The American bombs falling on Iraq and Syria barely make headlines anymore. Over the past four days alone, the US and its allies have launched at least 70 airstrikes against "Islamic State" (IS) targets.

The public and Congress have largely backed Washington's third Iraq war. According to the Pew Research Center, 63 percent of Americans support the US military campaign against IS.

Forty-seven percent of the country would even support sending ground troops back to the Middle East. That's an eight-point increase over last year, according to Pew.

Though the president has ruled out sending combat troops back to the Middle East, he has deployed a growing number of advisers. On Wednesday, the White House announced plans to send 450 additional US troops to train Iraqi forces, bringing the total number to more than 3,500.

The advisers will be stationed at Taqaddum airbase in Anbar province near the city of Habbaniyah, which is just 33 kilometers (20 miles) from two cities controlled by IS.

"Habbaniyah is sandwiched between Ramadi and Fallujah, now both Islamic State strongholds," Wayne White, a former senior Iraq analyst at the State Department, told DW. "The Islamic State has made several efforts to move against Habbaniyah."

"The personnel in Habbaniyah will be in greater danger," White said.

Even as the president moves US advisers closer to the front line, he has failed to acquire formal authorization for the war against IS.

The Obama administration claims to have all the authority it needs under the 2001 authorization for the use of military force. But Congress passed that authorization in the aftermath of the September 11 terrorist attacks on Washington, DC, and New York City.

The resolution empowered President George W. Bush to target those responsible for the attacks - al Qaeda and its Taliban allies. The Islamic State militia, currently in control of large parts of Iraq, didn't even exist at the time.

"The precedent that gets set is one of continued war, fighting on an expansive, executive branch interpretation of existing legal authority," Jennifer Daskal, an expert on national security law at American University, told DW. "That certainly sets a potentially concerning precedent used in the hands of a future administration."

The legislature has implicitly approved the new war in Iraq by appropriating funds, according to Daskal. But it has not passed a resolution explicitly authorizing a military campaign that encompasses thousands of airstrikes and advisers.

"Congress has a responsibility to step up and debate and discuss and authorize the conflict that we're involved in today in 2015, not the conflict we were in in 2001," Daskal said.

In February, the White House did draft a new authorization specifically tailored to the current conflict. But Congress wasn't satisfied. The hawks refused their support because the draft put restrictions on the use of ground troops. And the doves were opposed because it didn't repeal the 2001 authorization.

"The administration is in a large part to blame," Daskal said.

The administration also lacks a comprehensive strategy to win the war. President Obama said as much during the G7 summit in Germany, where he met with Iraqi Prime Minister Haider al-Abadi.

"We don't yet have a complete strategy, because it requires commitments on the part of the Iraqis about how recruitment takes place, how that training takes place," the president said. "The details of that are not yet worked out."

But, according to Wayne White, the core problem is not training or recruitment - it's the politics. The Obama administration supported the ouster of Prime Minister Nouri al-Maliki because he was a sectarian Shiite who stoked tensions with the Sunnis, providing fertile ground for the Islamic State.

But his successor hasn't done much to bury the hatchet.

"So far Abadi has done nothing more than make vague requests, vague sweeping assurances that don't mean anything to people who've been screwed already," White said.

The 450 additional advisers are being sent to train recruits from the local tribes, which, it's hoped, will put a more Sunni face on a war that so far has been waged largely by Iranian-backed Shiite militias.

"You're never going to get them unless there's this grand bargain," White said. "It has to be a very bold, genuine outreach to Sunni Arabs because they've been stung once already under Maliki."

US President Barack Obama has approved the deployment of up to 450 more troops to Iraq, to help counter recent gains by "Islamic State." The Pentagon has stressed that none of the soldiers will be deployed in combat. (10.06.2015)

One year ago, the "Islamic State" seized Mosul. Since then, IS's reign has spread across Iraq and Syria. DW's Birgit Svensson listened to recordings of the battle that show the Iraqi army's failure. (10.06.2015)

A string of explosions across the Iraqi capital has killed dozens, according to police and medical sources. The bombings follow a deadly attack on a government office by "Islamic State" militants in Anbar province. (09.06.2015)