A string of explosions across the Iraqi capital has killed dozens, according to police and medical sources. The bombings follow a deadly attack on a government office by "Islamic State" militants in Anbar province. 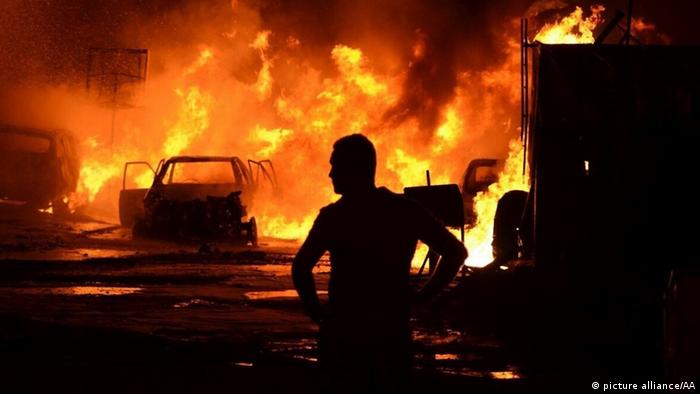 A car bomb, which detonated near a restaurant in the city's east, killed 10 people, including three women, and injured 24. Several shops and cars were torched in the attack.

Earlier on Tuesday, a roadside bomb targeted an army patrol, killing four people, three of them soldiers. In addition, three more people were killed by a blast in the Saydiya district of southern Baghdad, and another three in the western Amriya quarter.

It was not immediately clear who was behind the attacks.

Also on Tuesday, three militants dressed in army uniforms killed at least eight people in a government building in Iraq's western Anbar province. The "Islamic State" (IS) claimed responsibility for the incident, saying that their gunmen had killed "dozens of apostates."

One of the attackers blew himself up inside the building, while the other two were gunned down before managing to detonate their suicide vests, according to a local official.

Another 17 people were injured, according to a police source, including the head of the district council Shakir al-Issawi, who jumped from the window of his office after the explosion.

Mosul: a year under IS

Anbar province is mostly controlled by the "Islamic State" group, with only pockets of territory still held by the government. IS has been attacking Baghdad and the surrounding areas, while also fighting Iraqi forces on other fronts across the country.

The Tuesday attack comes almost exactly a year after IS forces conquered Iraq's second city Mosul, during their sweeping offensive across Iraqi territory.

"Because the forces we've trained are performing better than expected, we feel it's in everyone's interest to train more," he said.

The training of Sunni fighters is currently being handled by Baghdad authorities, with Washington criticizing what it considers the slow pace of the projects.

Warren admitted that a boosted training program could require more American troops deploying in Iraq, beyond the force of roughly 3,000 advisers and trainers already in place.

Previously, Defense Secretary Ashton Carter stirred criticism in Baghdad with his comments on the recent IS victory in Ramadi, saying that the "Iraqi forces showed no will to fight."

US-led coalition to ramp up operations against IS

Military leaders have agreed to bolster strategic operations in Iraq against "Islamic State" militants. The decision comes after a one-day meeting in Paris of 25 countries in the US-led coalition against the terrorists. (02.06.2015)