Suicide attack on Iraq police base claims dozens of lives

Iraqi security forces have been killed in a suicide attack on a police base in the turbulent west of the country. Early reports have suggested that "Islamic State" jihadists were behind the assault. 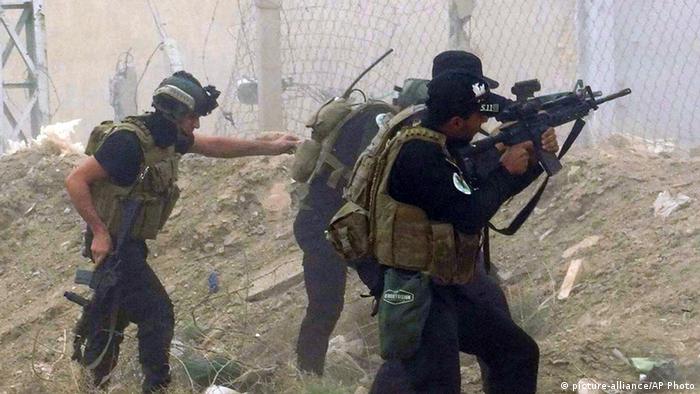 Security forces fighting IS in Ramadi

The terrorists detonated an explosive-laden tank at the base in the Tharthar area, according to Iraqi security officials. The site of the attack lies roughly 120 kilometers (74 miles) northwest of Baghdad, between Samarra and the city of Ramadi, which is currently held by Islamic State jihadists.

Police said at least 38 people were killed on Monday. According to a doctor from Samarra hospital, at least 33 others were injured in the attack.

Last month, the Islamic State started its final assault on the city of Ramadi with up to 30 such blasts. Following those attacks, the US promised to deliver 2,000 anti-tank systems to Iraqi forces to help them disable or detonate the vehicles before they reach their target.

Last week, Iraqi officials announced the start of operations to recapture Ramadi and the rest of the province al-Anbar.

The hard-line Sunni jihadist group has seized large swathes of territory in northern and western Iraq and in neighboring Syria over the past year, with the aim of creating a "caliphate."

Iraq has launched a military campaign to retake the provincial capital of Ramadi after it fell to "Islamic State." Initially, Shiite militiamen will lead the campaign and are already on their way to the area. (26.05.2015)