President keeps out of sight as Algeria′s protests spread | Middle East| News and analysis of events in the Arab world | DW | 06.03.2019

President keeps out of sight as Algeria's protests spread

Algeria reels from protests as President Abdelaziz Bouteflika stays out of sight. Demonstrators don't just want the 82-year-old out: They're demanding the fall of the regime. Who really pulls the strings in Algeria? 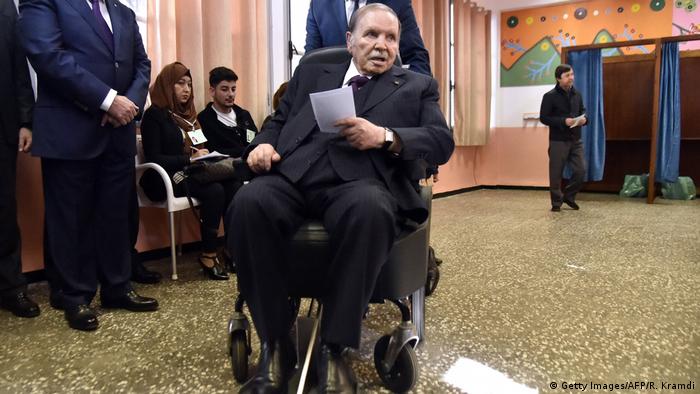 In January 2011, Tunisia's Jasmine Revolution brought the dictatorship of Zine el Abidine Ben Ali to a quick end. Only four days earlier, the question of whether he was even still in the country had helped fuel the now-legendary chants of "the people want the fall of the regime." Then, Ben Ali reappeared on national television — in one breath threatening merciless punishment for people who undermined the country's stability, and promising jobs and political reform in the next. But his regime would not continue.

Where the popular uprisings of 2011 and 2012 led to chaos, civil wars and new autocracies in other Arab countries, Tunisia became the lone example of success. Since then, Tunisia has been struggling to find its way toward democracy and pluralism.

Is Tunisia's neighbor Algeria experiencing a belated Arab Spring? Some parallels are certainly there. As in Tunisia, Egypt, Syria and Libya, the anger of the masses in Algeria is directed above all at the head of state, 82-year-old Abdelaziz Bouteflika. The president has ruled the country of 40 million since 1999 without interruption and will run for his fifth successive term in the April 18 elections.

Unlike Tunisia's Ben Ali or Egypt's Hosni Mubarak, who was also run out of office early in 2011, Bouteflika is not necessarily a hated man. Older Algerians in particular appreciate his role in the War of Independence against France, and then later, when he became president in 1999, following the end of the civil war, in which up to 200,000 people were estimated to have died. Bouteflika has been credited with working toward stability after that brutal conflict by offering amnesty to former Islamist guerrillas, among other measures.

Rather, the anger of the predominantly younger demonstrators, who have taken to the streets of Algiers and many other cities for weeks now, is directed against the conditions that Algeria has been stagnating under for decades. Many young people can't find jobs, but corruption runs rampant. Very few benefit from Algeria's wealth of natural resources, and there is almost no political movement to speak of. In a country where half of the population is under 30 years of age, the lack of future prospects for young people in particular is a dangerous potential source of conflict. 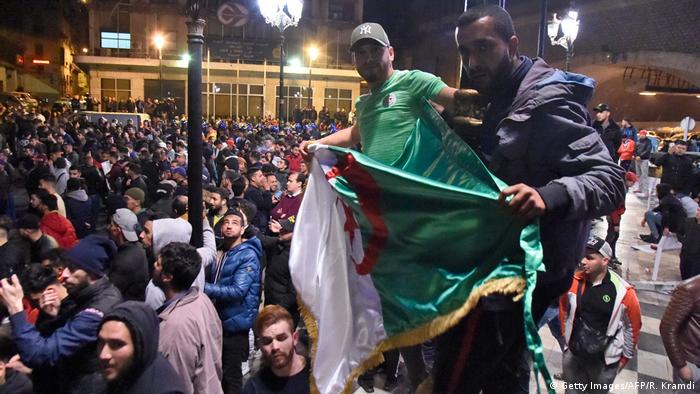 Protests immediately greeted the announcement that Bouteflika would seek another term

What is unclear is whether and to what extent Bouteflika still has any influence over the conditions in Algeria. He has not directly addressed the nation for many years. Younger Algerians have only received presidential announcements in the form of messages read to them by news presenters, as happened on Sunday, when a TV journalist recited the news that Bouteflika would indeed run for re-election, apparently announced in a letter written by the ailing president. After that, however, he will immediately initiate reforms leading to new elections and his own withdrawal from politics, he was said to have written. "I listened and heard the cries from the hearts of the demonstrators," Bouteflika was quoted as writing. There is no evidence that he really wrote these things himself. The only experience the 40 million Algerians have of their president nowadays is as a phantom.

Bouteflika has been in a wheelchair since suffering a stroke in 2013. As concerns have mounted over the years about whether Bouteflika's ailing health allows him to make decisions and act independently, the details of the president's well-being have been treated like a state secret. Algeria's ambassador to France was recently even forced to deny rumors that Bouteflika had died. And, when challenged on the topic by DW Arabic, a leading member of Bouteflika's National Liberation Front party could not give a plausible answer about whether the president could have composed his public letter to the people of Algeria.

Observers agree that these days the figure of Bouteflika ultimately only stands in as a compromise between the forces that have long determined the country's fate: a complex network of background powers that includes oligarchs and military leaders and leading politicians from various parties. Algerians call this network "le pouvoir," French for ­­­­­"the power." Bouteflika's brother Said is said to be in the inner circle, as are People's National Army Chief of Staff Gaid Salah and the industrialist Ali Haddad.

For many years, these background figures have been unable to agree on Bouteflika's successor. Now, the situation threatens to slip through their fingers — and their political and economic privilege with it. They have to reposition themselves. On Tuesday Salah, in a gloomy allusion to the civil war of the 1990s, warned that some forces wanted to take Algeria back to the "era of extreme pain." But, he said, the army would not allow security to collapse. This could certainly be seen as a threat.

All scenarios — from a successful uprising against the regime to a reconfiguration of background power brokers or a military coup — are conceivable, but few promise stability. Algeria is facing turbulent times. Unlike Ben Ali in Tunisia, however, Bouteflika won't need to escape the country by plane if demonstrators put an end to his political career: He has already been out of the country for weeks. While Algerians protest his latest run for office, the president is in Geneva, officially for a "routine medical checkup."