Algerians across the country took to the streets to protest President Bouteflika's plan to seek a fifth term as president. Bouteflika has only been seen in public a handful of times since suffering a stroke in 2013. Thousands of people across Algeria marched on Friday to protest against President Abdelaziz Bouteflika's plan to seek a fifth term. Police used tear gas to disperse crowds in the capital. While strikes and protest are fairly common in the country, they do not usually touch on national politics.

The 81-year-old has been in office since 1999 and said he will run in the April 18 presidential election despite concerns over his health following a stroke he suffered in 2013.

"No to Bouteflika and no to Said," a crowd chanted while marching through the center of Algiers. The president's youngest brother, Said Bouteflika, is a presidential adviser.

News of the protests was publicized on social media, and the demonstrations went ahead despite mosque preachers warning of possible violence.

In addition to the demonstration in Algiers, protests were held in at least five other cities, including Oran, Tizi Ouzou, Bejaia, Annaba and Setif, the news website TSA said, citing witnesses and videos that had been posted online.

The General Directorate for National Security said 41 people were arrested during the protests over "public disorder, assaulting forces and damaging property."

Bouteflika was chosen as the presidential candidate by the ruling FLN party, and he enjoys the support of several political parties, trade unions and business organizations. Facing a divided opposition, he is expected to win reelection.

According to official figures, more than a quarter of Algerians under 30 are unemployed, and many feel disconnected from a ruling elite made up of veteran fighters from Algeria's 1954-1962 independence war with France. 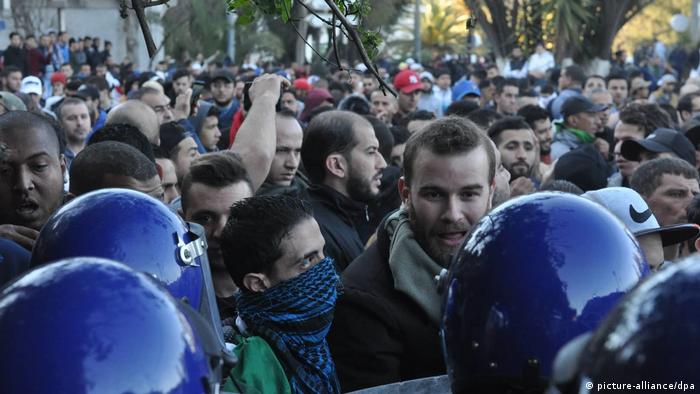 Because oil and gas revenues, the country's lifeline, flowed freely at the time from crude sold at $100 a barrel, the government was able to further calm tensions by increasing spending.

Bouteflika's office said late Thursday that he would be traveling to Switzerland on Sunday for "routine medical checks." No further details were given. He has traveled to Geneva for medical tests before.

Bouteflika does remain popular with many Algerians, who credit him with ending a long civil war by offering an amnesty to former Islamist militant fighters.

His re-election would provide short-term stability for the FLN, the army and business tycoons, and postpone a potentially difficult succession.

Algeria is a key gas supplier to Europe and an ally of the United States in the fight against Islamist militants in the Sahel region of North Africa.

President Bouteflika will run for a fifth term amid concern about a political transition following the 81-year-old's rule. For some he is respected for ending the country's civil war. For others he is an autocrat. (10.02.2019)

French President Hollande has made a speech to the Algerian parliament during a trip aimed at improving relations between France and its former colony. Their shared history has been a long-standing source of tension. (20.12.2012)

Algeria has not seen the same revolutionary sentiment as other authoritarian regimes in the region, but the farcical nature of upcoming presidential elections have engendered discontent. (16.04.2014)

Algeria: Thousands take to the streets to relaunch protest movement 16.02.2021

The Hirak movement, which ousted former president Abdelaziz Bouteflika, has been given a new breath of life after a year of coronavirus restrictions.