Over the last 50 years the Jewish population in Tunisia has been dwindling. For many the only Jewish restaurant in the capital, "Mamie Lily," has become not just a culinary but also a cultural reference point. 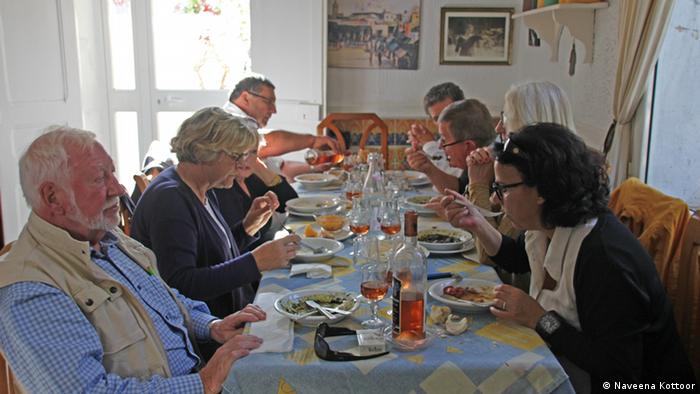 The sleepy seaside suburb of La Goulette is renowned for its fish restaurants on Avenue Roosevelt. But for those in the know and those who are curious, there is a slightly different menu on offer just around the corner on Avenue Pasteur.

It's easy to miss Tunis' only Jewish restaurant; it's hidden behind a tall overgrown fence and fiercely guarded by a little dog.

Once visitors have passed through the blue gate and past the dog, they will find themselves in the leafy garden of an Italian villa dating from 1902.

After almost two decades of living and working in Paris, Jacoube Lellouche, the tall and jovial patron, decided to return to Tunisia and open a restaurant in La Goulette, where he was born and brought up.

Jacoube serves the kind of Jewish food he grew up with, and recruited his mother Lily, who he affectionately describes as "the library of Jewish Tunisian cooking," as the head chef. 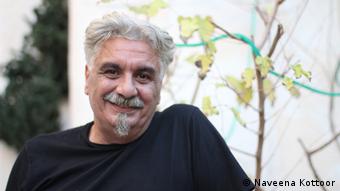 "She has given me a very big present by giving me these recipes," says Jacoube.

An open door leads from the garden straight to the kitchen, and even before entering, it is hard to miss the person who the restaurant is named after: Lily Lellouche, also known as Mamie Lily.

At the age of 86 she is still an imposing woman with a deep commanding voice.

Lily started acquiring her cooking skills from her mother-in-law and their family friends after her wedding to Jacoube's father in 1945.

"I was eating a lot and cooking a lot, it all came with practice," she says and shrugs.

Even though she sometimes feels compelled to step in, these days she mainly oversees the kitchen at "Mamie Lily."

The bulk of the chopping, cooking and serving is done by three Muslim women from La Goulette.

Among them is Raouda Ben Said, who has been working for the Lellouches for 15 years, and learned everything there is to know about Jewish cooking from Lily. 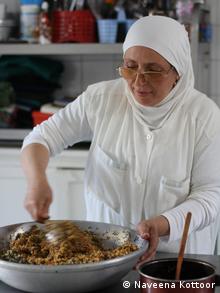 The restaurant is small - six tables plus a few outside in the courtyard for if and when the weather allows it.

The menu reflects the influence Jewish migration from the Mediterranean, especially from Spain and Turkey, but also from the Middle East, has had on the local Tunisian cuisine.

"We are here in Tunisia at a real crossroad between civilizations. The East, the West, the North and the South," says Jacoube Lellouche. "And we are very, very proud of this."

On offer are traditional Jewish dishes such as fish balls from Spain and mishmishya, an Iraqi meat stew sweetened with dried apricots and caramelized onions, but also typical Tunisian dishes such as slata mechouia - a Berber salad made of roasted peppers, tomatoes and onions.

"The Rolls Royce of our cooking is tfina bkaila - a beef stew with spinach and beans," says Jacoube. "It's traditionally reserved for Jewish holidays and special occasions like bar mitzvahs and weddings."

And of course there is couscous. But unlike the traditional Tunisian couscous which ends up red because it's cooked in a tomato- and harissa-based broth, the Jewish couscous here is white. The grain is cooked separately - the Jewish way - then broth, meat and vegetables are served on the side.

But beyond the menu, newspaper clippings, family photographs, artifacts and paintings are yet more evidence of the influence Judaism has had on Tunisian life over the last 2,000 years.

Since opening the restaurant, Jacoube has been organizing interfaith dinners with members of the local Muslim and Christian communities.

That is how Father Paul, a Belgian Catholic priest, who lived in Tunisia for more than 50 years, became a close family friend and a regular at the restaurant.

These days he lives back in Belgium, but during a short visit to Tunis, he couldn't resist coming back to the place and the people who made him feel welcome and at home. 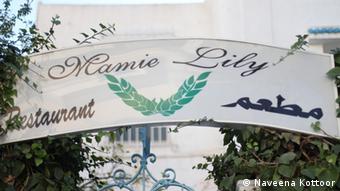 "I used to come here to have a dialogue on a human level, not only on a religious level," he says as he tucks into his favorite dish, grilled fresh sea bream with fries. "To speak, to exchange and to feel things together. It was very important to me."

When Jacoube and his brother, Sidney, grew up in La Goulette in the 1950s, there were 14 synagogues, one mosque and one church here.

Like many Tunisian Jews, Sidney Lellouche now lives in France.

"It was fantastic growing up in Tunis, there used to be a big Jewish community here. That has changed now, there is hardly anyone left," he says. "We lived our Jewish identity in our families and our community. We used to celebrate Sabbath and Passah together. That's over now."

He is not the only one at the restaurant who has fond memories of growing up in this seaside neighborhood and celebrating Jewish rituals.

Bouthaina, a 35-year-old consultant, has come to the restaurant looking for a taste of her childhood. She grew up in the area with Jewish neighbors and friends and used to spend Sabbath with them.

"We would come here to light candles for them and to cook. It was very cozy," she remembers. "Afterwards we would go to the disco together. It was like a weekly ritual for us." 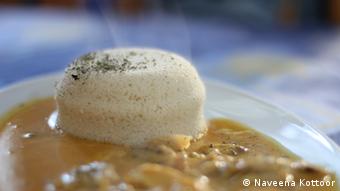 "I know more Tunisian Jews in Paris than here. There isn't much contact," says Karim, a 29-year-old doctor and a regular at the restaurant, who has brought his mother to introduce her to "Mamie Lily."

"They are making traditional dishes here. They are so close to the Muslim dishes that we cook in our homes but still a little bit different. I really like it."

The influence the Jewish population has on the local cuisine, has now become one of the few ways for young Tunisians to engage with the role the Jewish community once played.

Khalim, a 29-year-old musician, has come to the restaurant out of curiosity.

"I heard that Jewish gastronomy is really tasty, so I came here to try it," he says as he waits for his order, madfouna - a stew of lamb shanks with spinach.

"Most of the recipes we eat in our daily life are of Jewish origin. Even my mom and my grandmother were taught how to cook by Jewish neighbors."

For Jacoube being a proud Tunisian and also Jewish has never been a contradiction, and this project was always about more than just serving traditional Jewish food.

"This is not a place reserved to the Jews. It's an open space for all the communities," he says. "We want to speak together and know each other and have an exchange."

And so "Mamie Lily" has become more than just a restaurant, it's a small lively museum of Jewish Tunisia.

The once-large Jewish communities in Tunisia and Egypt have almost disappeared. Those who remain are treated with mistrust and suspicion by society. The Arab Spring has made their situation even more difficult. (27.11.2012)

The Mediterranean port of Marseille has sun, sea and a soccer club that binds fans of all colors and creeds. Even the notorious drug trade shields the city from the ethnic attacks that have swept other French cities. (19.04.2012)