An ancient ocher mine discovered in submerged caves on Mexico's Yucatan Peninsula has given insights into the lives of some of the first inhabitants of the Americas. The site goes back around 12,000 years.

Researchers in Mexico have published findings over a huge ancient ocher mine lying in caves filled with water beneath Yucatan Pensinsula.

In an article published on Friday in the journal Science Advances, scientists said more than 100 dives totaling more than 600 hours had been carried out at the site, during which a large number of mining artifacts were discovered. Divers explored some 4.3 miles (7 km) of subterranean passages in three separate cave systems.

Operations to mine ocher at the site in what is now Quintana Roo state began some 12,000 years ago, as human populations first spread through the region, and went on for about 2,000 years. 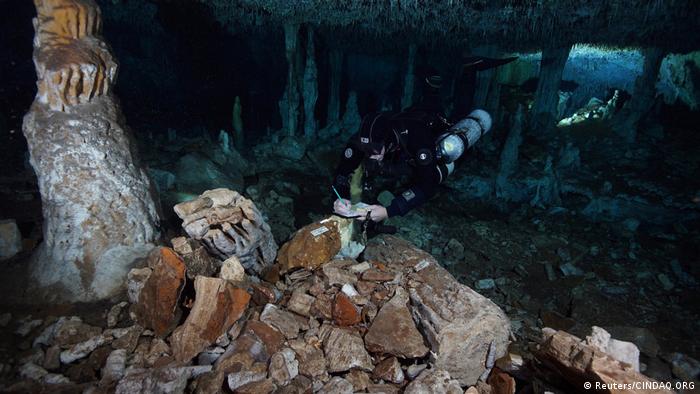 A diver collecting samples in the ocher mine 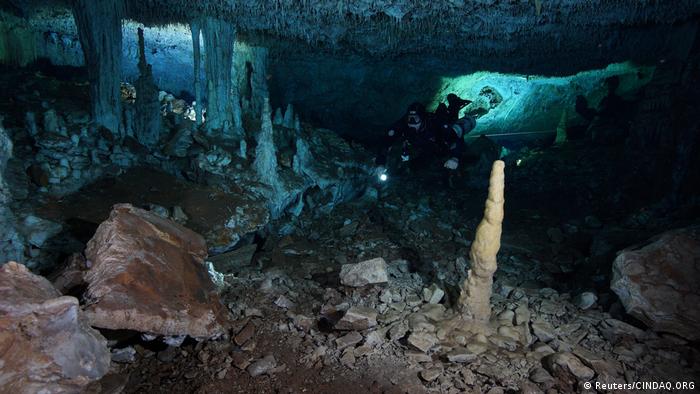 Ocher is an iron-rich mineral pigment that was particularly prized by prehistoric peoples as a substance used for painting objects and bodies, mortuary practices, as sunscreen and for tanning hides. It is still used today by some peoples in Africa and Australia.

"All the artifacts are in pristine condition, so we can see percussion marks where they were breaking the stone floor, we find tools lying beside the pits and the marker stone cairns and fire pits that they used for navigating and illuminating the cave," said study co-author Eduard Reinhardt of McMaster University in Canada.

The mine has been underwater for some 8,000 years, submerged amid rising sea levels after the last Ice Age.

A number of skeletons of ancient individuals have also been discovered in caves around the site. Scientists had long sought to explain their presence and now feel they know the answer: for ocher mining.

The researchers have made tens of thousands of photos with the aim of constructing a 3D model of the site.

The discovery of a prehistoric structure spanning 1.2 miles has opened up new lines of investigation into the mysterious Stonehenge. The shafts indicate that the early inhabitants had developed a way to count. (22.06.2020)

Archaeologists have discovered a monumental Mayan complex in southern Mexico, using laser scanners. It's hoped the spectacular find will reveal surprising insights into a community that lived there 3,000 years ago. (05.06.2020)