Prague embassy crisis ′a severe blow to the Berlin Wall,′ Genscher says | Germany| News and in-depth reporting from Berlin and beyond | DW | 30.09.2009

West Germany's former foreign minister Hans-Dietrich Genscher tells DW how he experienced September 30, 1989, the fateful day when he told thousands of East German refugees in Prague their departure had been approved. 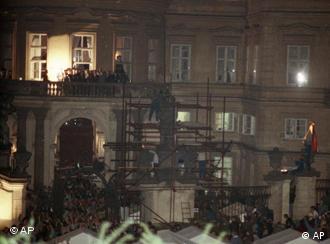 Around 4,000 people had taken refuge in the West German embassy in Prague

The Cold War that ensued after World War II partitioned Europe into East and West, with an Iron Curtain cutting right through Germany. The division of East and West Germany culminated in the building of the Berlin Wall in 1961. Many East German refugees died during attempts to cross directly into West Germany, and as a result people began to look to third countries to reach the West. In the late 1980s, hundreds of desperate East Germans sought refuge at the West German embassy in Prague, the capital of then-communist Czechoslovakia, triggering a major diplomatic incident that paved the way for the fall of the Berlin Wall on November 9, 1989, and German reunification less than a year later.

DW: Mr. Genscher, you yourself fled the communist German Democratic Republic (GDR) in 1952. How did you feel when you announced to the embassy refugees that they could leave for West Germany?

Hans-Dietrich Genscher: Of course, for me it had a very special significance. I could well understand the motives of these people, because I myself had walked the same path, although under totally different circumstances; I also had the desire to live in freedom. I also sensed how fundamentally desperate these people were, and how they saw themselves in the face of an ever-colder October, not knowing how it would turn out. And then to be able to deliver such a message - that was a wonderful thing, which I thankfully had a role in fulfilling.

I knew this message was more than an announcement that it was possible to leave. I also had to say the train would be going through the GDR.

You had to say that?

I had to say that, because I wanted to openly say how it would happen. After that I said that families with babies would be in the first train, and the trains would go via Dresden to [the West German city of] Hof. There was quite an outcry then - "No, they're not to be trusted." And then I told them, "I give my personal guarantee that nothing will happen to you. You know, I have been down the exact same road as you."

That was also very important for the credibility of the statement. I fully believed in the statement I had given. I believed that the Soviet Union and my colleague - today I can say my friend - Mr. Shevardnadze, as well as the foreign minister of the GDR, Oskar Fischer, who I had known as a reliable dialogue partner and with whom I had just had negotiations about the departures, would keep their word. 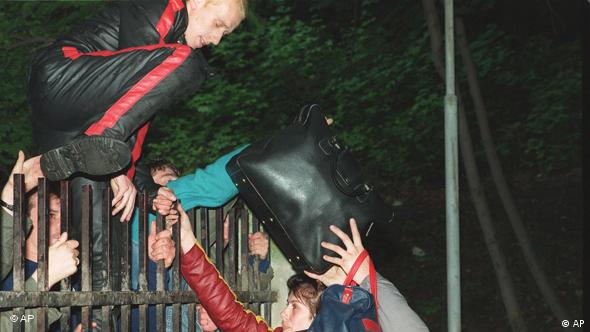 GDR refugees climbed the fence to get into the embassy compound

Had East Berlin stipulated that the trains must go through the GDR, or was that a concession made by the West German government?

No, the East German delegation had decided that themselves. During our conversation we had also spoken about the ways and means. In New York, Oskar Fischer said that there were basically two possibilities: the trains could go across the Bavarian-Czech border, and then East German consular officials could come in advance to the West German embassy and stamp the passengers' passports or passengers could enter the East German embassy in Bavaria and have their passports stamped by West German consular authorities - the point being, that the GDR could prove their sovereignty. Or the trains could travel for a short time through the GDR.

But I had not really expected that the GDR would choose the second alternative. Because it was quite clear: If these trains went through the GDR with hundreds or even thousands of refugees, the situation might spiral out of control. And it did. But that was the deal, and I now had to make my case. It must have surely contributed to my credibility that the people I was standing in front could say to themselves, "Well, he really is one of us, in a way." 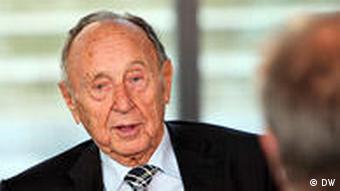 Genscher had been an East German refugee himself

Before you made this announcement in Prague, you had been in New York. You just alluded to the fact that you were also in negotiations with Eduard Shevardnadze and the representatives from the East German government. Had you already received a clear "yes" from Moscow?

For me, hearing the words "I will help you" from Moscow was a "yes." But also, shortly before I left the hotel to board the flight home, our delegation received a message that the GDR's permanent mission in Bonn would explain the particulars to me the next day, which was Saturday, September 30. That means the matter had essentially been approved; it was now about sorting out the route, and it had just been announced that the trip would go via the GDR. In that case I had said I must accompany them [the refugees]. However, at the last minute - I was already at the embassy in Prague - the GDR asked me to refrain from joining the refugees in the train. I did not insist because I wanted to convince the people, and I did not want to jeopardize the overall deal over this issue. Of course, there were certain people in East Berlin who did not approve of this decision.

And when you look back at all this, can you say that the Berlin Wall had already begun to fall in Prague?

In any case, it received a serious blow. One must remember that just 20 days before, on September 10, Hungary had opened its borders for refugees that were in Hungary, and this was despite the fiercest protests of the GDR leadership. But these refugees in Prague, they had fled with the approval of the GDR. That means that in 20 days, less than three weeks, the GDR made a U-turn that essentially nullified the Wall. It was built in 1961 because the leadership of the GDR had lost the competition between the systems. People were just walking away. And when the people ran away, well, then one had to lock them in. And now even that didn't work. Fundamentally, that was a serious blow to the Wall.

How much had the animosity between East and West weakened at this point?

Well, we had already spoken about how we had to remove the enmity in West-East relations. That couldn't override the differences between a free democratic order and a socialist order, but it continued even after the establishment of the Warsaw Pact, through the final act of Helsinki, and through the cooperative building up of trust. It played a very important role, so that a kind of revolution from above could take place in Moscow through Gorbachev and Shevardnadze and [Alexander] Yakovlev, who wanted to open Soviet society with words like 'perestroika' and 'glasnost.' Opening Soviet society meant opening the Soviet Union to the rest of the world - all of which affected Soviet spheres of power. That had an impact on everything. 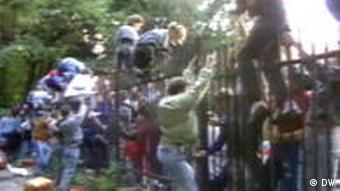 The streets around the embassy were thick with people

And the events of September 30, 1989, happened against this background. The DDR media had downplayed the flow of refugees to the West German embassy and the actions of the West German government were very strongly criticized. How did you feel about this criticism at the time?

I saw it as the last desperate cries of a government in which its own people could not believe. There were always these GDR demands that I should close the embassy.

I responded that I had no intention of erecting another Wall around the German embassies in the Soviet sphere of control. Because this was our responsibility, we [the West German government] believed in a single German nationality. There were also strong forces that wanted us to recognize a separated nationality. But it was clear to me that a single German nationality corresponded to what the German people wanted, and the chants in the streets of the GDR of 'We are the people' and 'We are one nation' documented this.

Did you sense back then that the Wall would soon fall?

The GDR could not survive what happened in Prague. Nobody could say when and how this would happen, but it was clear that this grave blow to the Wall had to have a lasting impact.

Germans from the East and West have been living together for the past 20 years now. But reunification has not yet been fully realized in the minds of many people. How do you view the reunification process today?

Well, I occasionally hear that this appears to be the case with many people … but I do not know how many. There may be some who pine for the old days, but it's worth noting that they do so with the privilege of living in a free society.

I have the impression that unity is much more advanced than some would like. It is particularly encouraging for me when I speak at universities or spend time with young people: They know precisely that their parents' fate was that of separation. But the future - and that is their life - is a shared future. They have to face this together and that's why looking into the future is also a common vision. Nobody can deny that.

A few months before the 20th anniversary of the Berlin Wall's fall, the British Foreign Office has released thousands of declassified documents detailing the UK government's reactions to the reunification of Germany. (11.09.2009)

Almost 20 years after the fall of the Berlin Wall, most Germans are disappointed at what the country has achieved since reunification, a new survey shows. (02.01.2009)

Genscher in 2005: "Unification was the only way"

The year 2009 marks the 20th anniversary of the fall of the Berlin Wall. DW recalls the key events, portrays the protagonists and hears from witnesses.