The mayor of Calais claimed she would clear out the refugee camp outside the town, but the people are still there, still determined to get to the UK. Maya Shwayder went on a tour with MEPs. 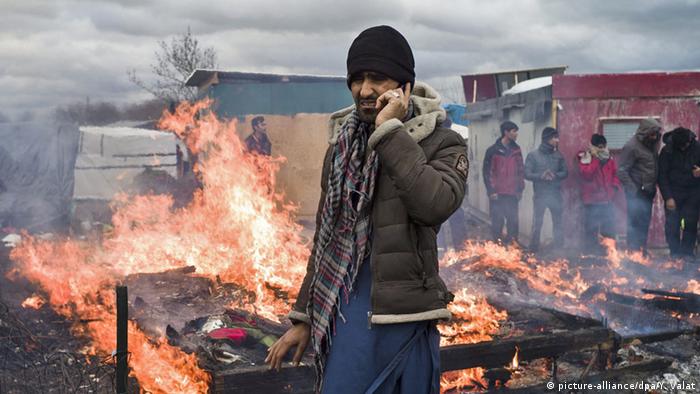 No one wants this place to exist.

Not the refugees, not the migrants, not the NGOs, not the police hemming in the camp from all sides, and certainly, the government of the French city of Calais doesn’t want it there.

That’s how Annie Gavrilescu put it. Annie is the legal and community liaison coordinator with the volunteer organization Help Refugees, and has been in the Jungle for the past 10 months.

The sprawling tent-and shipping container town is crammed next to a highway overpass. Gavrilescu and many of the people with whom she works - both other volunteers as well as refugees and migrants from Afghanistan, Iraq, Somalia, Eritrea, and Sudan, not to mention Syria - have survived three attempted evictions.

"A lot of Sudanese and Eritreans lost their papers, phones, photos," the first time the town decided to bulldoze, Gavrilescu told DW.

The Jungle camp, as it is known, continues to grow. On average, 47 new people arrive every day, and Help Refugees estimates there are now 1,500 more people in the Jungle than there were back in February. That’s a total of 7,037 people living under taerpaulins next to a highway, including 608 unaccompanied children, all with the single goal of getting to the UK, Help Refugees said.

Brexit or not, here I come 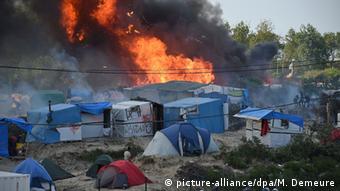 The cramped conditions can lead to violence

The question of Brexit hangs over the heads of the Members of the European Parliament (MEPs) as they arrive in Grand-Synthe, a small French town next to Dunkirk, just up the coast from Calais. The refugee camp there more closely resembles the temporary tent cities that have come to characterize today’s music festivals. Neat plywood huts are set out side-by-side, some with playground structures and wide gravel pathways in between. The atmosphere is relaxed. But all the people living here still have one thing on their mind: how to hop onto a truck on the nearby highway and ride under The Channel into England.

Both here in Grand-Synthe and further south in the Jungle by Calais, tents and tarps are dotted with graffiti and art, or painted with simply "UK" or "London," sometimes with the Union Jack inked alongside various Iraqi, Kurdish, and Afghani flags. A baker selling his wares on the main road of the camp calls his establishment "London Bread." A tent across the path advertises English classes. A spot of graffiti at the base of the highway overpass declares "London Calling."

The idea of the UK as a destination puzzled many of the MEPs, who questioned why the refugees wouldn’t simply claim asylum in France once they’d reached Europe. Tomáš Zdechovský, a Czech MEP, told DW that he’s visited every refugee camp in Europe, and had heard over and over again that they have only three destinations in mind: Germany, Sweden, and the UK.

"It’s very frustrating, but someone needs to tell these people that they have no opportunity to get to the UK," Zdechovský said. "But that won’t change anyone’s mind." 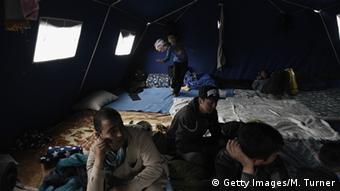 The UK is still the most sought after destination

The reasons for the push to the UK, as advocates explain, are manifold: overall, the view is simply that the UK is more welcoming, Gavrilescu said. Grande-Synthe Mayor Damien Carême said that for many people, it’s a question of language skills and access to the gray labor market. Many people also already have family living there who write to them about what life is like.

For the refugees and migrants, the question of the Brexit, and the likelihood that seeking asylum will become even more difficult, doesn’t seem to bother them.

"For us, to go to the UK is getting really hard, but if we get any chance to go to there, there will be more support to look after our lives," said Dani, a refugee who said he was from Kurdistan and had been in the Grande-Synthe camp for nine months. "Because, there are many many people from Europe that will have to go back to their own country, because they’ve got no problem with their life, that’s why there will be more space for us to go to there. Even if it takes more than a year, more than 10 years, we will still be here and we will always try again to go to the UK," Dani said.

Refugees at the Jungle don’t register, Gavrilescu said, simply because the lists are full. They just arrive by whatever means necessary and set up camp, and every night attempt to hop on lorries heading for the UK. DW briefly witnessed one man attempting to open the back of a lorry that was parked and refueling. The man standing near the front of the truck did not seem to notice.

In Grande-Synthe, Carême told the MEPs during an on-the-record meeting that authorities do not register refugees because, he said, "I don’t want a camp with barbed wire that people can’t leave."

Dutch MEP Jeroen Lenears questioned the validity of this decision not to register the refugees in any way. "They’re not registered, there are no fingerprints taken," Lenears said. "This worries me. Europe can’t be a la carte. It’s not up to you to decide where you’re going to go. There needs to be more control, or integration. They need to be here to ask for asylum, and if they don’t then they’re here illegally."

Czech MEP Zdechovský said his skepticism about the methods is fueled in part by the fact that he very much doubted many of the refugees are being truthful about their countries of origin. "In Macedonia, I visited a camp, and all of the refugees there had Syrian passports," he said, "but none of them were Syrian."

The falsification and purchase of falsified documents is a known problem among the refugee population. But the lack of any effective system of verification has fueled the distrust and uncooperative attitudes between governments, world bodies, and NGOs attempting to mitigate the refugee crisis.

So it’s your Fault 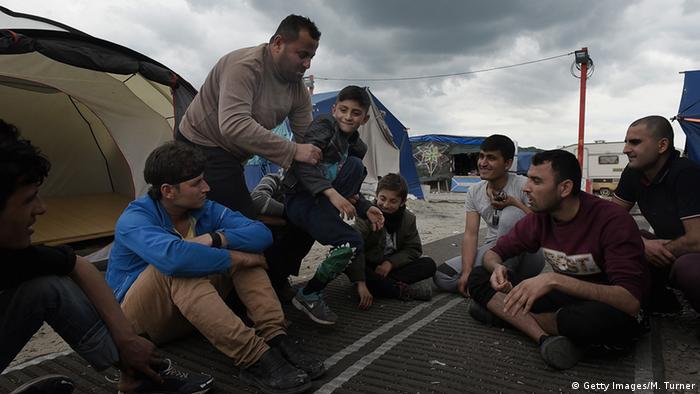 "We get no support from the government. No monetary support, no camp management. Any money they do give goes to shipping containers (which house registered refugees), police, and tear gas," Gavrilescu said.

Despite the empathy and interest displayed by many of the MEPs visiting the camps in July, they said there’s not much more the EU can do, and the ball is in France’s court.

"The EU has to help. I want to see EU flags in these camps," Zdechovský said. "But this is the responsibility of the French government. People are here for so long without any fingerprints or procedure. They have to register, and then they can see there are more possibilities."

Meanwhile, people are dying. Gavrilescu told DW the story of a 15-year-old Kurdish boy who froze to death in the back of a refrigerated truck on its way to Dover. Two days before the MEPs visited, an Eritrean girl was hit and killed by a truck on the highway. The truck driver drove away without stopping. The head coordinator for the Eritrean community in the Jungle texted Gavrilescu asking, "Where should I send the body?" Gavrilescu had no answers.

"We want recognition that this is a humanitarian crisis in a developed country," Gavrilescu said. "We want a humane solution to this."