Refugees at Europe's most notorious refugee camp in northern France are recording their day-to-day experiences thanks to a unique Facebook project. They did so this week as parts of the camp were destroyed. 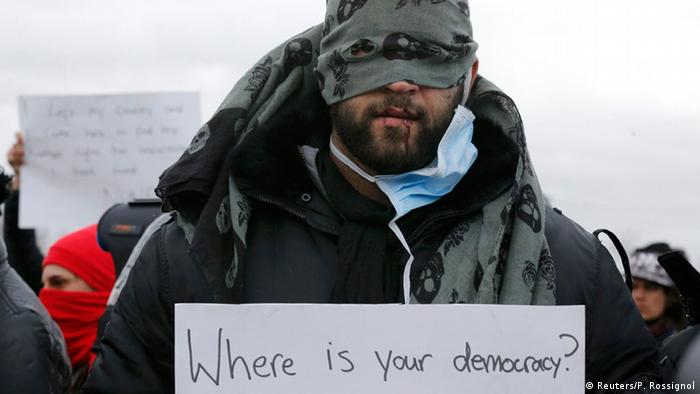 Typically, the stories we hear of refugees comes from journalists and activists - but only rarely from the refugees themselves.

In northern France, a Facebook collective called "Jungleye" is trying to change that.

The Jungleye collective is the work of French photographer Séverine Sajous, who handed out cameras to refugees so that they could document their lives at the sprawling camp.

This week, refugees documented as parts of their camp were dismantled by French riot police. When refugees and activists protested, they were at times met with tear gas and water cannons.

The first two images come from Ammar M. Raad. He's a refugee from Al Qusayr, Syria, near the Lebanese border, a few miles south of Homs. His Facebook profile only says that he graduated from the University in Lebanon.

The next two images are from Ahmad Alsamray, who describes himself on his Facebook page as a "former teacher," originally from the northern Iraqi city of Mosul.

Another comes from Moomin Qunbs of Daraa in southern Syria, near the Jordanian border.

A general description of the images on the Facebook page reads that the refugees this week were "ready to report what should have been the peaceful dismantling of the Jungle. But from our lens, we could only see tear gas smoke, burning houses, tensions and disarray.

"Within this moment of adrenaline, we felt like photo journalists for good. But while we edited our pictures, we fastly went back to the reality.

The page is updated regularly, with new arrivals occasionally contributing with their own photographs.

The Calais camp is under constant media scrutiny due to its location on the French side of the Channel Tunnel leading to the UK, and the squalid conditions of the refugees who live there. The site itself was formerly a toxic waste dump.

As part of the Jungleye project, some of the images taken by refugees are printed as postcards and then sold for one euro ($1.10) to raise money for the project and the refugees themselves.

For more images and further information on the project, visit the collective's Facebook page.

Police used tear gas to disperse dozens of migrants who lined up to prevent them pulling down the makeshift camp. Hundreds of tents and temporary shelters were torn down. (29.02.2016)

As Calais 'Jungle' is dismantled, concerns mount for refugee children

More than 300 lone children are stranded in Calais as the "Jungle" is demolished around them. Yet a French court ruling may offer some of them a lifeline after all. Caroline Brothers reports from Calais. (26.02.2016)