Amid an atmosphere of global conflict, the pope has called for peace in his annual Christmas message. The church itself has been plagued by recent scandals and opposition. 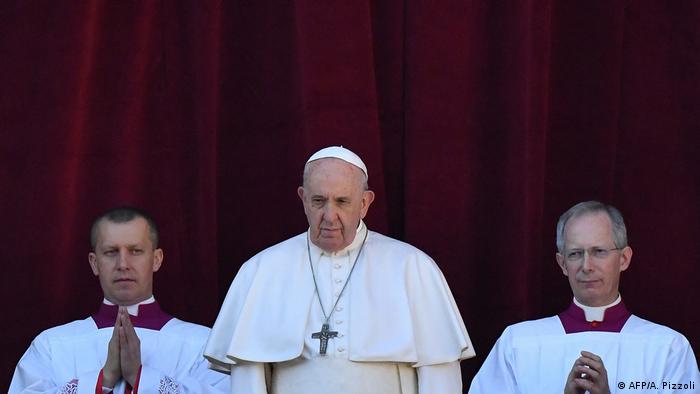 Pope Francis delivered his annual "Urbi et Orbi" Christmas Day message on Wednesday, his eighth as pontiff, using it to call for the end to a range of political crises.

The traditional speech typically addresses the significance of Christmas amid the conflicts of contemporary society.

Addressing tens of thousands of worshipers and tourists from the balcony of Saint Peter’s Basilica in Rome, the religious leader emphasized that global change begins in individual human hearts.

The 83-year-old called for a resolution to current crises in Syria, Venezuela, and Lebanon, among others. He also denounced attacks on Christians by extremist groups in West Africa, calling out Burkina Faso, Mali, Niger and Nigeria, particularly.

The Argentinian pope then prayed for migrants who attempt a perilous sea crossing in hopes of reaching Europe.

"It is injustice that forces them to ensure unspeakable forms of abuse, enslavement of every kind and torture in inhumane detention camps," Francis said. "It is injustice that turns them away from places where they might have hope for a dignified life, but instead find themselves before walls of indifference."

In the run up to the address, Pope Francis and the Archbishop of Canterbury Justin Welby offered messages of support for conflict-ridden South Sudan, a predominantly Christian country.

"We wish to extend to you and to all the people of South Sudan our best wishes for your peace and prosperity … as you strive for a swift implementation of the peace agreements," the religious leaders said in a joint statement.

A message of love on Christmas eve

Late Tuesday, the pope spread the word of unconditional love in his Christmas Eve mass in the Vatican.

The leader of the world's 1.3 billion Roman Catholics led the service in St. Peter's Basilica for thousands of people as well as those watching on large screens outside.

Read more: Pope Francis: 'There is corruption in the Vatican'

"Christmas reminds us that God continues to love us all, even the worst of us," Francis said in his sermon.

The pontiff told the crowds gathered at the Vatican: "You may have mistaken ideas, you may have made a complete mess of things, but the Lord continues to love you. How often do we think that God is good if we are good and punishes us if we are bad. Yet that is not how he is." 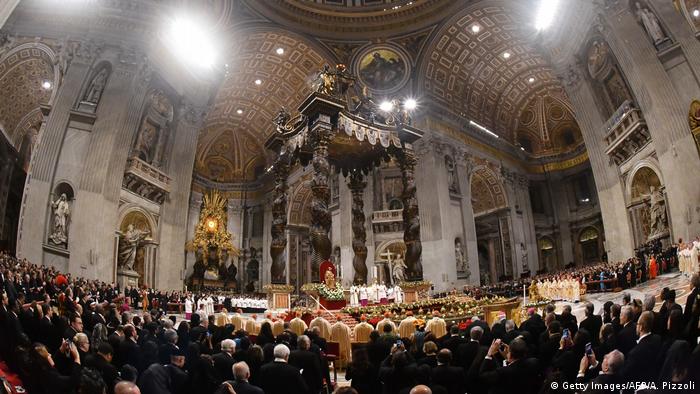 The Pope held his seventh Christmas Eve mass in St. Peter's Basilica. The pontiff weaved his sermon around the spiritual and personal significance of Christmas

Francis last week took further measures to deal with some of the Vatican's troubles by abolishing the "pontifical secret," the highest level of confidentiality in the Catholic Church, which will no longer apply in clergy sex abuse cases. The reform removes a major hurdle that prevented police from investigating crimes among the clergy. The Vatican has also been plagued with financial concerns.

The 266th Pope continued his sermon by saying: "Let us contemplate the child and let ourselves be caught up in his tender love. Then we have no further excuse for not letting ourselves be loved by him."

With a choir singing "The First Noel," Francis headed down the center aisle of the basilica and unveiled a statue of the newborn Jesus lying in a nativity scene at the foot of the altar.

Read more: Pope Francis 'not afraid' of schism with US Catholics

"Whatever goes wrong in our lives," he continued. "Whatever doesn't work in the church, whatever problems there are in the world, will no longer serve as an excuse."

The 83-year-old added: "It will become secondary, for faced with Jesus' extravagant love, a love of utter meekness and closeness, we have no excuse."

Marcial Maciel, the founder of the Roman Catholic Legionaries of Christ order, was accused of child abuse in the mid-1990s but the Vatican only took action in 2006, possibly due to his links with the late John Paul II. (22.12.2019)

Speaking at the Vatican on one of the biggest shopping weekends of the year, Pope Francis has said people should "resist the dazzling lights of consumption" ahead of Christmas. (01.12.2019)