The pope has passed beneath the iron gate reading "Arbeit macht frei" at the former Nazi concentration camp. He is the third consecutive pope to visit the site where an estimated 1.1 million people were killed. 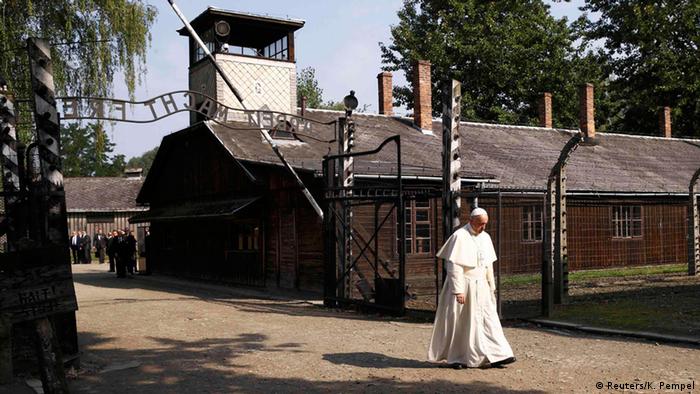 Pope Francis visited the most notorious Nazi death camp of Auschwitz-Birkenau on Friday for a somber visit at the site of suffering. He vowed to remain silent for the duration of the visit.

"Lord, have pity on your people. Lord, forgive so much cruelty," Francis, born Jorge Mario Bergoglio, wrote in the guest book.

Inclement weather forced Pope Francis to travel by car for about 65 kilometers (40 miles) from Krakow to Oswiecim where the concentration camp-turned-museum is located. Auschwitz was one of several Nazi concentration camps set up on occupied territory now located in countries other than Germany.

Vatican and Polish church officials have said that Francis expressed his sorrow in silence at the site, mourning the mostly Jewish victims in quiet prayer and meditation.

The pontiff, credited with forging closer ties between the Catholic Church and Jews since his election in 2013, met a dozen of the camp's Holocaust survivors at the site.

Poland's Chief Rabbi Michael Schudrich welcomed the pontiff's wordless pilgrimage to the camp. "Once we leave Birkenau we must spend the rest of our lives screaming, yelling and fighting all kinds of injustices," he said on Thursday.

After arriving Wednesday in Poland, the pontiff said the world had been plunged into a piecemeal third world war. He has repeatedly denounced those committing crimes in the name of religion, after Europe suffered a string of deadly attacks.

The Holocaust is an extremely delicate subject in Poland, where locals fuelled by anti-Semitism were accused of butchering Jews or delivering them to occupying German forces. More than 100,000 non-Jewish Poles, Roma, Soviet prisoners of war, homosexuals and anti-Nazi partisans were also killed at the Auschwitz-Birkenau camp.

A few shafts of light from a tiny window were the only light cast on the pope's white figure, as the pontiff prayed in the dark underground prison cell of Maximilian Kolbe, a Polish Catholic friar later canonized as a saint. Kolbe had sacrificed his own life during the war to save another man.

After several minutes kneeling he crossed himself and rose to his feet to continue his tour by golf cart to Birkenau, the main extermination site, three kilometers from Auschwitz. He was driven along tracks laid in 1944 to allow trains of prisoners to be transported right to the gas chambers and crematoria.

The pope also met with several Auschwitz survivors. One by one, he stopped, shook their hands and bent over to kiss the elderly survivors on both cheeks. He then carried a large candle and placed it at the Death Wall, where prisoners were executed before the camp was liberated by the Soviet Red Army in 1945.

Joe Biden inauguration: 'This is democracy's day' 37m ago