Pope Francis, seemingly in a good overall condition, has made his first public appearance since having intestinal surgery last week. The church leader stressed the importance of accessible and free healthcare for all. 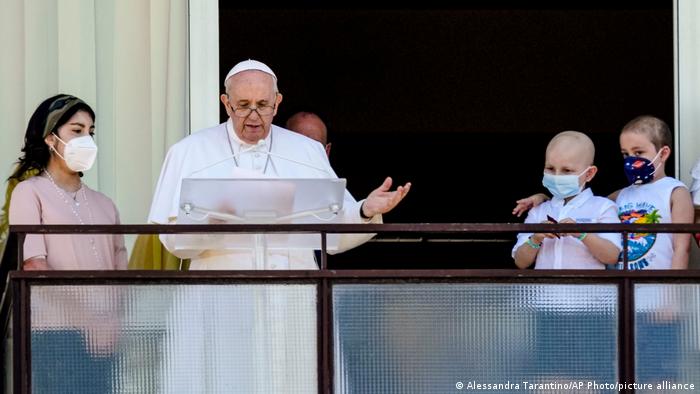 'A healthcare system that assures good service' must be 'accessible to everyone,' the pope said

Pope Francis greeted well-wishers on Sunday from the 10th floor balcony of his hospital room where he is  recovering from major intestinal surgery.

The pope, 84, stood for 10 minutes on the balcony of his special suite at Gemelli Polyclinic in Rome, and thanked the crowd of at least 200 supporters for their prayers.

"I am glad to be able to keep the Sunday Angelus appointment, even here" at the hospital, he said. "I have felt your closeness and the support of your prayers. Thank you from the bottom of my heart," the pontiff said to supporters gathered below.

A Holy See spokesman said Pope Francis has been steadily recovering following his July 4 scheduled surgery to remove a portion of colon which had narrowed due to inflammation.

He temporarily experienced a fever last week following the operation, but a chest and abdomen scan and other tests showed no abnormalities. The Vatican has not said when he might be discharged from hospital.

Pope Francis said good health care should be accessible and free for all.

"In these days of being hospitalized, I have experienced how important good health care is, accessible to all, as it is in Italy and in other countries," he said.

"A health care system that assures good service, [and is] accessible to everyone. This precious benefit must not be lost. It needs to be kept," the pope added.

Health care remains a major political issue in countries such as the United States, which does not provide universal cover for its citizens.

What else did the pope say?

Pope Francis also urged the crowd to "pray for all the sick, especially for those in the most difficult conditions."

Following the prayer, the church leader called for an end to violence in Haiti following the assassination of President Jovenel Moise at his family home early Wednesday.

"I am close to the beloved Haitian people; I hope that the spiral of violence will cease and the nation can resume the journey toward a future of peace and harmony," Pope Francis said.

The pontiff also appealed to people to take care of the environment.