Pope Francis said during a Christmas speech he's praying the UN will bring peace to the war-torn countries of Syria and Libya. He also expressed his compassion for refugees and those seeking to help them. 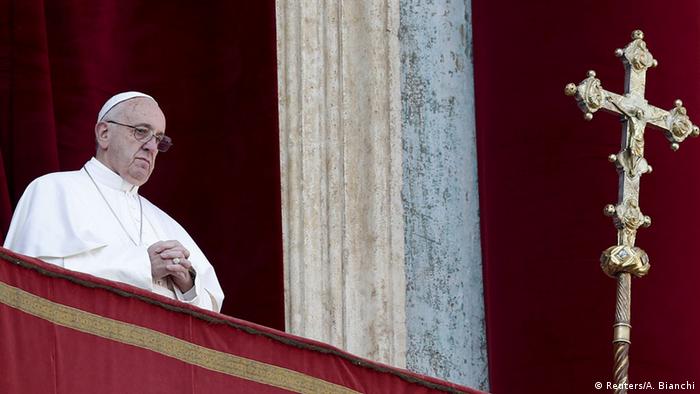 Pope Francis said on Friday during his annual Christmas address that he supported UN efforts to end the wars in Syria and Libya.

Speaking at the St. Peter's Basilica in Rome, Francis decried "brutal acts of terrorism" around the globe and said he was praying for an end to the various conflicts being waged in the Middle East.

"We pray ... that the agreement reached in the United Nations may succeed in halting as quickly as possible the clash of arms in Syria and in remedying the extremely grave humanitarian situation of its suffering people," he said, referring to a draft resolution agreed upon last week by the UN Security Council. He also called on a peace agreement in Libya to be followed through.

Francis also took the time to draw attention to the plight of refugees, many of them directly impacted by the wars in Syria and Libya. He also had high praise for those who've acted to help them.

"May God repay all those, both individuals and states, who generously work to provide assistance and welcome to the numerous migrants and refugees," he said.

The pope's Christmas speech followed an address delivered last night in which he criticized "a society so often intoxicated by consumerism and hedonism, wealth and extravagance, appearances and narcissism."

Pope Francis will receive the annual Charlemagne Prize for 2016. The award, given out by the German city of Aachen, honors those who promote European unity. (23.12.2015)

Laws on migration should "reflect a readiness to welcome migrants and to facilitate their integration," according to the Argentine pontiff. He was speaking as thousands seek entry to the EU, many via Italy. (15.12.2015)