The head of the Catholic Church has issued very strong words against the Vatican's bureaucracy. At a Christmas meeting, he said members of the clergy were "amassing material goods, not out of need, but to feel safe." 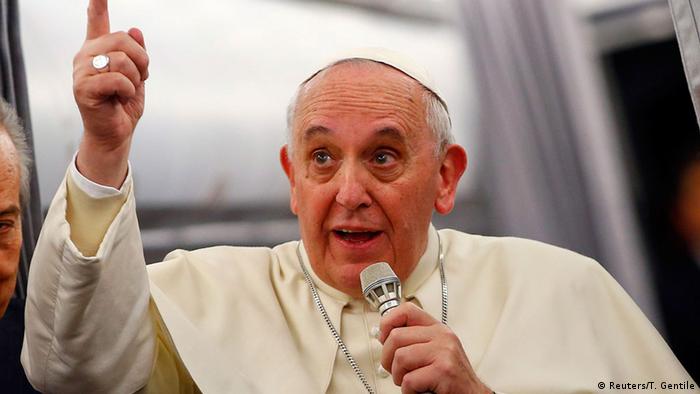 Turning a meeting with the curia, which is traditionally used to exchange pre-Christmas greetings, he accused the cardinals, bishops and priests who serve him of using their careers at the Vatican to gain power and wealth and of living "hypocritical" double lives in "a parallel world, where they disregard all that they sternly teach to others, and they start living a life that is secret and often dissolute."

Francis said some prelates were suffering from "spiritual Alzheimer's disease," that they had gradually lost their spirituality, forgot their connection with God and become slaves to "their passions, whims and manias." He spoke of lugubrious priests, "cold-blooded assassins" of other people's reputations, of hypocrites and sycophants. He urged the prelates to use the Christmas season to repent and make for a better church in the year 2015.

Addressing the Curia's lay staff, he asked for forgiveness "for my failings and those of my advisors, and also for some scandals, which are very hurtful. Forgive me."

"This is a speech without historic precedent," church historian Alberto Melloni, a contributor to Italian daily "Corriere della Sera," told the Associated Press. "If the pope uses this tone, it's because he knows it's necessary." Melloni noted further that before Francis' election, the Curia had virtually answered to no one, saying "an entire generation of the Curia ran it as if they were pope."

Marco Politi, a Vatican expert who writes for the "Il Fatto Quotidiano" daily, told dpa news agency that Monday's address was "a frontal attack" against his enemies inside the Curia, and could be seen as "one last warning" before a direct confrontation.

Vatican watchers said the speech could have been in reference to results of a secret investigation ordered up by Emeritus Pope Benedict XVI in the aftermath of the 2012 leaks of his papers, which caused the so-called VatiLeaks scandal in 2012.

In the aftermath of the leak of the documents, the then Pope Benedict tasked three cardinals to probe deep into the Vatican's culture to find out what could have prompted a papal butler to steal incriminating documents and leak them to a journalist. Their report is known only to the two popes.

Francis was elected in March 2013 with a mandate to clean up a Catholic Church shaken by Benedict XVI's surprise resignation after VatiLeaks and a landslide of revelations about sexual abuse by priests throughout the world.

Since his election, Francis has made some progress, especially on financial transparency, but a wider reform of the church's bureaucracy is still under consideration. A panel of nine cardinals tasked with investigating the matter is due to meet in February.

Former papal butler and Vatileaks whistleblower, Paolo Gabriele, has said the Pope was not informed enough about important issues. Gabriele also claims inhumane detainment conditions, which has prompted an investigation. (02.10.2012)