Pope: Failure at COP21 in Paris would be 'catastrophic'

Pope Francis has made a strong call to world leaders to agree on a binding agreement to fight global warming. Daniel Pelz reports from Nairobi, where the pontiff was speaking days before a key climate summit in Paris. 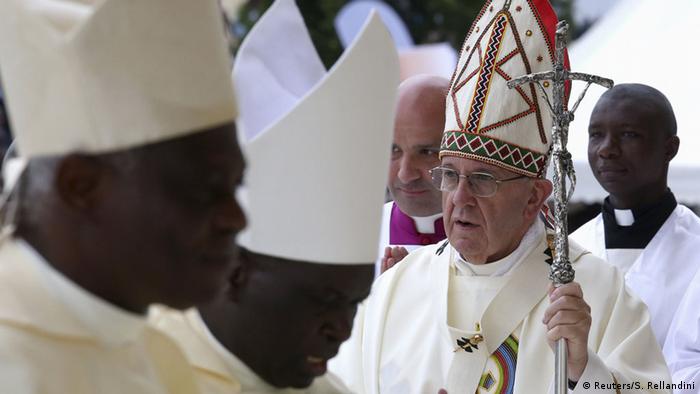 Before warning of the devastating effects of climate change in a speech at the United Nations office in Nairobi, Pope Francis had already gotten a taste of them.

Heavy rains poured down on more than 300,000 worshippers while he was celebrating a public mass in the Kenyan capital on Thursday morning. Kenya’s meteorological department says the rains can be attributed to the El Nińo weather phenomenon. It warns that much more is to come.

In an emotional speech, the pope called on the international community to act speedily to prevent climate change. "We are confronted with a choice which cannot be ignored: either to improve or to destroy the environment," the pontiff said in a conference room packed with United Nations staff and members of the diplomatic corps.

The pontiff's speech came just days before the kick off of COP21, an international climate summit in Paris. More than 150 heads of state and governments are going to negotiate a treaty that is supposed to limit global warming to 2 degrees Celsius compared to pre-industrialized levels. Previous attempts to agree on a binding treaty to cut global carbon dioxide emissions have failed. Thousands of faithful did not let the weather deter them from hearing the pope speak at an outdoor mass in Nairobi.

The pope had a clear message for the COP21 summit: "It would be sad, and I dare say even catastrophic, were particular interests to prevail over the common good and lead to manipulating information in order to protect their own plans and projects," he said in Nairobi, speaking in Spanish.

It's not the first time the pope has spoken out strongly about the need to fight global warming. In May 2015, he released his encyclical “Laudato Si!”, a 180 page action plan to protect the environment.

But the pope also had an encouraging message for his audience. He voiced belief that "human beings, while capable of the worst, are also capable of rising above themselves, choosing again what is good and making a new start."

"While the post-industrial period may well be remembered as one of the most irresponsible in history, humanity at the dawn of the twenty-first century will be remembered for having generously shouldered its grave responsibilities," the pope said, to much applause.

Before he delivered the speech, the pope had symbolically planted a tree on the UN's compound in Nairobi.

The director-general of the United Nations Environment Program, Achim Steiner, thanked the pope for his efforts to fight global warming.

"Addressing the world just a few days before the Paris climate conference, you remind world leaders, business leaders and individual citizens that we each have not only a responsibility, but an obligation to act on what our conscience tells us to be right," Steiner said.

Praying in the rain

Hundreds of thousands of Kenyans have attended a public Mass with Pope Francis in the capital Nairobi. They sang, danced and celebrated the pontiff despite heavy rains and security concerns. DW’s Daniel Pelz reports. (26.11.2015)

Expectations are high that Pope Francis will use his visit to Africa to address a number of reform issues in the African Catholic church. DW spoke to Asonzeh Ukah, an African religious affairs scholar. (26.11.2015)