Praying in the rain

Hundreds of thousands of Kenyans have attended a public Mass with Pope Francis in the capital Nairobi. They sang, danced and celebrated the pontiff despite heavy rains and security concerns. DW’s Daniel Pelz reports. 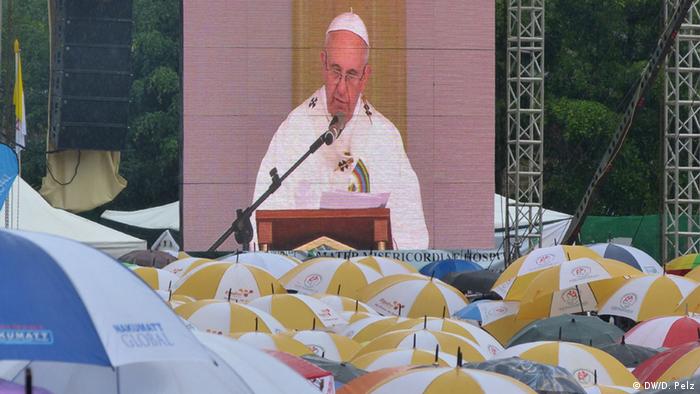 Peter Nyaga is one of the lucky ones who made it to the papal Mass – after three hours of waiting. "I have been here since 3 a.m. this morning," the 35-year-old accountant says. Like thousands of other excited Kenyans, he has been waiting in the queues that stretched for more than 3 kilometers (1.8 miles). Heavy night rains soaked the crowds. The green lawns of the University of Nairobi's graduation square turned into thick puddles of mud.

"They have no respect for us," Nyaga told DW, pointing at the security officers who seem unable to control the crowds trying to push their way through one of the entry gates. "I even saw them beating people in the line," he said. Behind him, security officers shout and wave their batons. Rescue workers hastily carry an unconscious woman into a nearby first aid tent.

Tempers had subsided when the pope arrived shortly before 10 a.m., but the rains had not. Tens of thousands, crowded together under a sea of colorful umbrellas, greeted the pontiff with songs, Swahili ululations and dances.

The papal mass drew a mixed crowd. The pope was welcomed by young men in business suits, elderly women wearing colorful cloths and headscarfs and Massai dancers in their traditional attire. Some 300,000 people attended the mass – a far lower turnout than the 1.4 million people expected.

Due to fear of terror attacks, security remained tight. The pope almost rushed through the crowds in his open-sided popemobile. 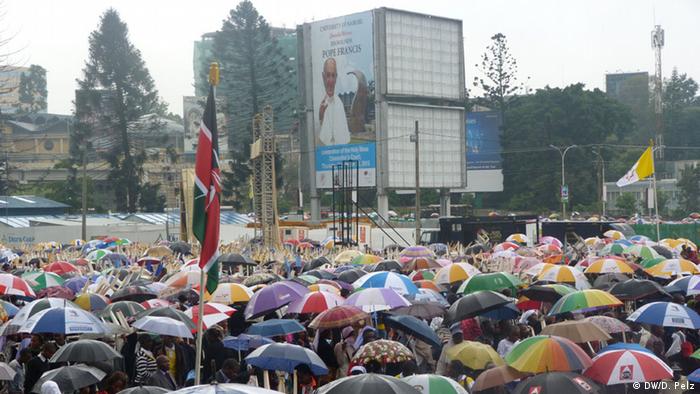 Despite the rain, hundreds of thousands gathered to try and see the pope

Families in the foreground

Pope Francis, known for his harsh criticism of poverty and social injustice, stayed away from controversial topics in his sermon. Instead, he called on Kenyans to stick to their traditional family values.

"Kenyan society has long been blessed with strong family life, a deep respect for the wisdom of the elderly and love for children," the pontiff said. He told the crowds that the health of every nation depended on the health of its families.

He also asked people "to resist practices which foster arrogance in men, hurt or demean women, and threaten the life of the innocent unborn” and he urged the young "to be guided by the great values of African tradition."

His words went down well with the crowd. Families play an important role in society and provide the only social safety net for many. "I am so happy about the pope's message," said Christine Denoon. "We're family people after all. Everything here is about the family."

"The message the pope gave us about families is beautiful. In these modern days, people are busy. The family ranks lower than it used to," said 38-year-old Josephine Kibunja. 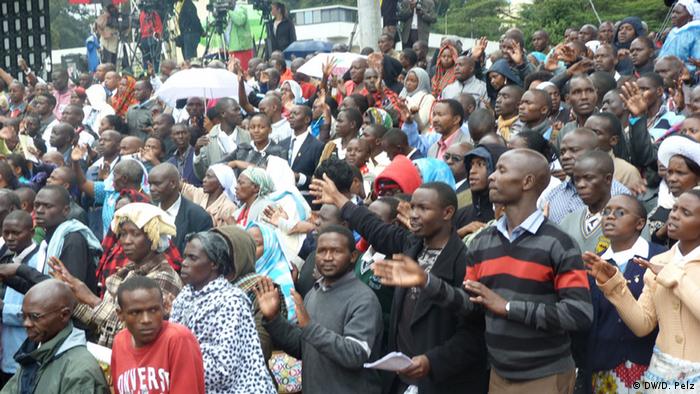 The crowd was big - but not as big as expected

Divisions within the church

Pope Francis' sermon, with its strong emphasis on traditional values, is also likely to soften divisions within the Catholic church. The pope has repeatedly called for a more open attitude towards separated or re-married Catholics.

This has not gone down well with many Catholics in Africa where the Catholic church is one of the most conservative in the world. African bishops have been among the strongest critics of any change in church teaching.

"I think this sermon is going to be well received by conservative Catholics," said Daniel Dodory, a Catholic priest who participated in the papal mass.

The pope will leave Kenya for Uganda on Friday. Before departing, he is scheduled to visit a slum in Nairobi and meet with young Kenyans at a special ceremony in Nairobi's biggest sports stadium.

Expectations are high that Pope Francis will use his visit to Africa to address a number of reform issues in the African Catholic church. DW spoke to Asonzeh Ukah, an African religious affairs scholar. (26.11.2015)