Polish mayor′s widow fights hate that killed her husband | Europe | News and current affairs from around the continent | DW | 15.07.2019

Her husband was assassinated as mayor of Gdansk. Now Magdalena Adamowicz, a newly elected member of the European Parliament, has taken up the fight against hate speech that threatens both public discourse and lives. 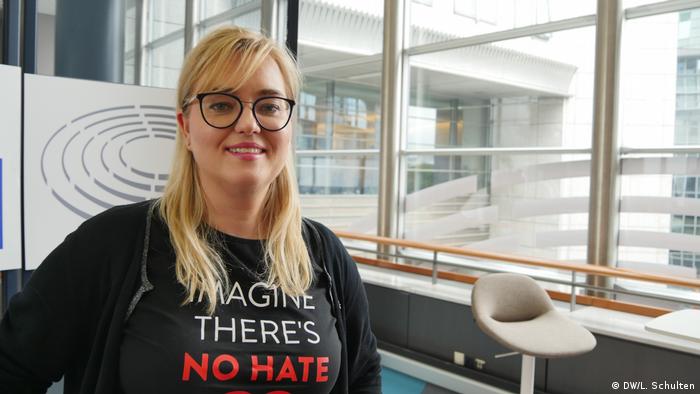 When an embittered ex-convict fatally stabbed liberal Gdansk Mayor Pawel Adamowicz in January, Poland was left shocked. The 53-year-old was on stage at a charity event when the man attacked him with a knife. Right-wing groups had threatened anti-government politicians online before, but a killing in front of the eyes of the nation turned words into harrowing reality.

In 2017, a nationalist youth organization had issued "political death certificates" for politicians, including Adamowicz. The certificates were not an isolated case: The same year, nationalists hung photos of Polish politicians on gallows. Elected officials have also fanned the flames. This April, a senator from the ruling Law and Justice party said the country should be "purged" of those "not worthy of belonging to our national community."

In grief, the mayor's wife and her two daughters left Poland and traveled abroad to reflect on Pawel's death and its causes. Condolences poured in from figures such as Pope Francis.

Magdalena Adamowicz came back with an idea for a campaign.

She called it "Imagine There's No Hate" and began with an open letter to her country's political, religious and civic leaders, appealing to them to raise their voices against hatred. 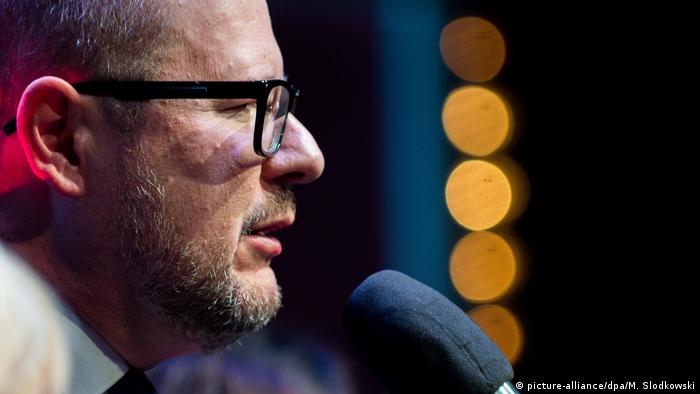 "I can sit between four walls and cry in silence or shout, but nobody will hear this," Adamowicz tells DW. "So I thought about what to do to avoid this [violence] in the future. To protect other people from suffering like we did."

A lawyer and lecturer at the University of Gdansk, Adamowicz had never regarded herself as a politician, but friends convinced her to run for European Parliament in May. She won a seat with nearly 200,000 votes from her home region of Pomerania, where Gdansk is located.

In Brussels, the new Polish MEP has found the political platform to pursue one of her main goals: an EU-wide law against hate speech, penalizing both the individual and the platform that publishes incendiary messages. She doesn't believe fighting the phenomenon on a national level is enough: "It has no borders […], it's like air pollution."

Hate speech and the threats posed by disinformation were also the main topics of her election campaign. Adamowicz is convinced her subject is of existential importance to society. 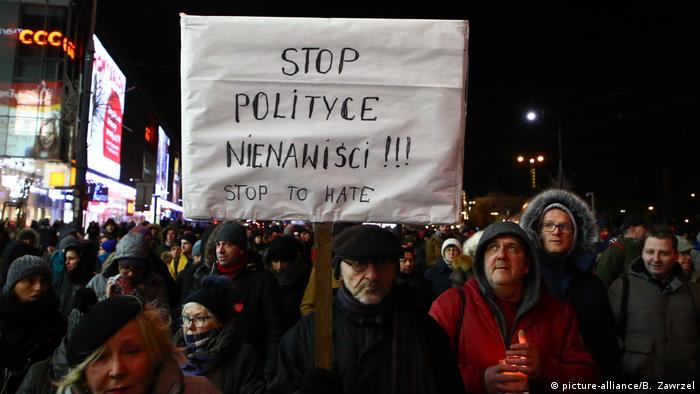 Pawel Adamowicz's murder rallied many Poles to speak up against hate

"We are not afraid of tanks or being attacked by aerial bombing. But what can really destroy us is this," she says. She points to the UK and the US, saying bots perverted the Brexit referendum and the US presidential elections in 2016.

Poland A and Poland B

Like in the UK and the US, in Poland polarized public debate and coarsened discourse have split the country. Two camps, "Poland A" and "Poland B," are consumed by mutual animosity, according to Ania Skrzypek, senior research fellow at the Foundation for European Progressive Studies think tank. That is: the cities vs. the countryside, the liberal West vs. the conservative East.

The rift "manifests itself in so many ways, including the television that is being watched," Skrzypek says. "In the countryside you get to see the [public broadcaster's] channel 1, and their portrait of Poland is a totally different one" compared to what more liberal media show.

The message on TVP1, the main public channel, which is supportive of the current conservative government, is "very bold, anti-liberal, anti-civil liberties," Skrzypek says. 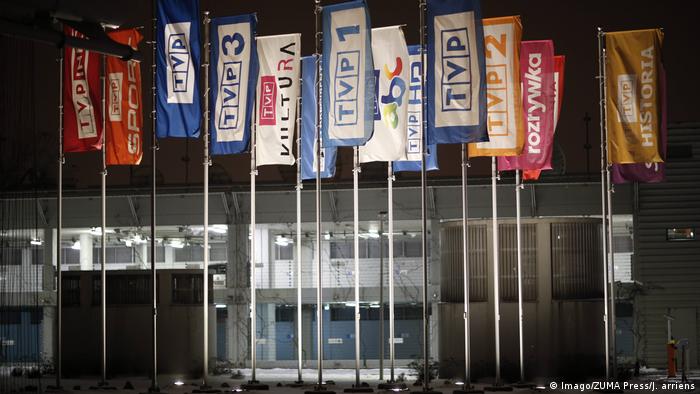 Liberal media, however, are divisive in their own way, she says. Though more subtle, they still cater mostly to one group, people who feel others "should somehow be detested for choosing the Law and Justice [party]."

Polarization is not confined to the airwaves. In the Polish parliament, Skrzypek says, "this antagonism is allowing the idea that you could go violent in the streets [… and it is] a very striking and shocking one." But the deterioration of political language and behavior doesn't stop there.

Recently Jaroslaw Kaczynski, chairman of the Law and Justice party, branded anti-government protesters as "national traitors" and called the LGBTQ+ rights movement a threat to the Polish nation. Before a Pride parade in Warsaw, a public TV journalist tweeted that "one must shoot at LGBT people," adding "not in the literal sense of course."

Blatant anti-Semitism is also a problem on Polish message boards. As Poland heads for parliamentary elections in the autumn, Ania Skrzypek believes the campaign will be "very, very divisive."

Nonetheless, Skrzypek says "we should not give up on Poles." She points out that people still turn out for elections and engage in progressive civic movements. "There is still enough [energy] in society to have a spirit of resistance when things go too far."

Despite being a visible figure in this resistance, Adamowicz does not receive many hateful comments. Instead, people whom she meets on the streets while campaigning often approach her for a hug. A giant heart-shaped card she uses at events has become a backdrop for group photos with sympathizers.

Even though Adamowicz is still mourning her murdered husband, there is no bitterness in her message. She wants to protect all victims of hateful rhetoric and disinformation. In her eyes, the killer is also a victim. People who have been "indoctrinated with disinformation" should get help before they commit violence, she says.

"My husband really loved The Beatles, and my older daughter does," Adamowicz says. "So we took [our slogan] from John Lennon's 'Imagine' and made up 'Imagine There's No Hate.'"

As her actions show, you can't say the determined MEP is a mere dreamer.

The Polish city of Gdansk is saying farewell to its mayor, who was stabbed to death at a charity concert. The suspected attacker's mother has told police she was concerned that her son was planning political revenge. (19.01.2019)

The murder of Gdansk Mayor Pawel Adamowicz is a warning that Polish society has become dangerously polarized and that the country's political right must work to ease rather than stoke tensions, DW's Bartosz Dudek writes. (15.01.2019)