A man who had been arrested as a suspect in a poker tournament robbery in Berlin has been released again. Police said there was no immediate grounds for holding the man. 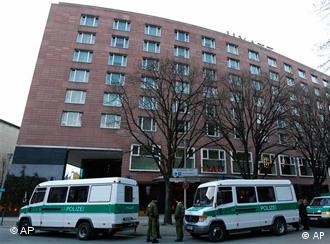 The search for the other three suspects continues

A man who had been arrested as a suspect in a spectacular poker tournament robbery in Berlin has been released again, police said.

The newspaper Berliner Morgenpost had earlier quoted security officials who said that a man was arrested late on Friday in the German capital. The suspect, believed to be of Arabic origin, was thought to have been involved in an earlier raid on a Berlin casino in 2004.

Last Saturday four masked men burst into the Grand Hyatt hotel on Potsdamer Platz in central Berlin, wielding machetes and handguns. The robbers escaped in a black Mercedes with 242,000 euros ($331,000) in cash. 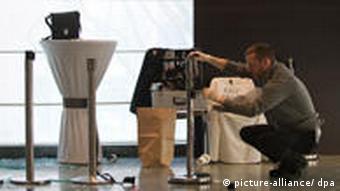 Police believe the robbers were "amateurs"

According to the Berliner Morgenpost, the police got information on the getaway car earlier in the week. Following the incident, about 80 witnesses' accounts were received, and police examined about 40 people, a police spokesperson told the news agency DPA.

Around 950 people were participating in the poker tournament, including tennis celebrity Boris Becker, who had been eliminated from the competition the previous day.

A total of 4.7 million euros in prize money had been offered in the prestigious German tournament, including a one-million-euro jackpot for the winner.

The head of the German police union this week described the thieves as "amateurs" and expressed confidence that they would be caught soon.

The news magazine Spiegel has since published a report raising doubts over the legality of Berlin poker tournament, and the security arrangements in place. Other German states forbade the games, since poker with large amounts of money is only permitted in licensed casinos with corresponding security equipment.

In order to hold the tournament at the hotel, organizer had to use a legal trick, designating Casino Berlin as the "sole organizer" with the Grand Hyatt hotel named a "temporary casino site."

German police expect to make arrests soon after a brazen robbery at Germany’s largest poker tournament at the luxury Grand Hyatt hotel in Berlin at the weekend. (08.03.2010)

Panic ensued at Germany's largest poker tournament Saturday afternoon when gunmen broke into the event held at a Berlin hotel and stole some of the prize money. (06.03.2010)