Authorities aggressively pushed back demonstrators who attempted to walk through downtown Istanbul to mark Women's Day. Around the world, marches took place despite fears over the spread of the coronavirus. 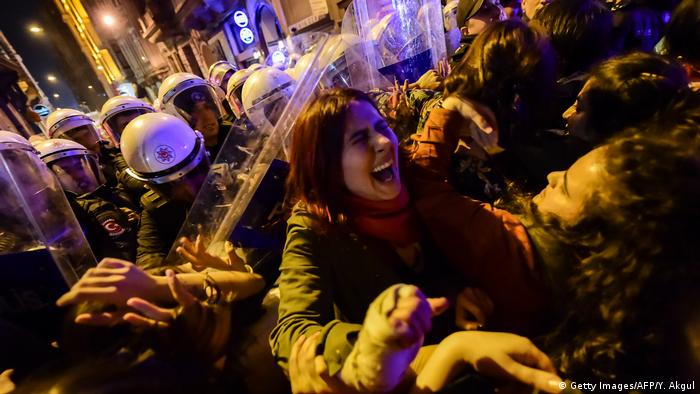 Police in Istanbul fired tear gas on marchers marking International Women's Day on Sunday. When the authorities attempted to block the city's famous Istiklal Street, they deployed the gas on demonstrators who did not immediately vacate the area.

"All roads leading to Taksim Square and Istiklal Street will be closed as these places are not classified as designated areas for assembly and demonstrations according to law," a statement from the governor read.

This marks the second year in a row Istanbul police have used pepper spray on International Women's Day protestors.

DW's Julia Hahn reported that most of the demonstrations were peaceful:

A planned Women Day's March was also violently broken up in Kyrgyzstan, where police arrested dozens of women after they were attacked by masked men who tore up their banners.

In Germany, large marches went on in Berlin and Cologne despite fears over the spread of the coronavirus, of which there are already more than 900 cases in the country.

One of the main themes of the marches was solidarity with transgender women, who are often left out of the conversation about gender equality.

London's march similarly went forward despite the fact that the virus outbreak has also reached England.

In South America, Chile hosted one of the biggest marches in the capital of Santiago. Gender-based violence in the country has been in the international headlines for months ever since a Chilean feminist anthem decrying rape culture and victim-shaming went viral in the fall. The country's feminist movement has been out in force amidst ongoing unrest across the country that first arose in October over the rising cost of living and widespread income inequality.

Other major marches were held in Buenos Aires and Bogota.

German Chancellor Angela Merkel says that men also have a role to play in improving gender equality. She noted that while the country has made progress on the issue, there is still work to be done. (07.03.2020)

Women are still the exception rather than the rule in the corridors of political power. Outside the parliamentary arena, however, women's power and visibility continue to grow, writes DW's Anja Brockmann. (08.03.2020)