Police in Kyrgyzstan's capital have detained dozens of women protesters at a rally to mark International Women's Day after masked men attacked them and tore up their placards. 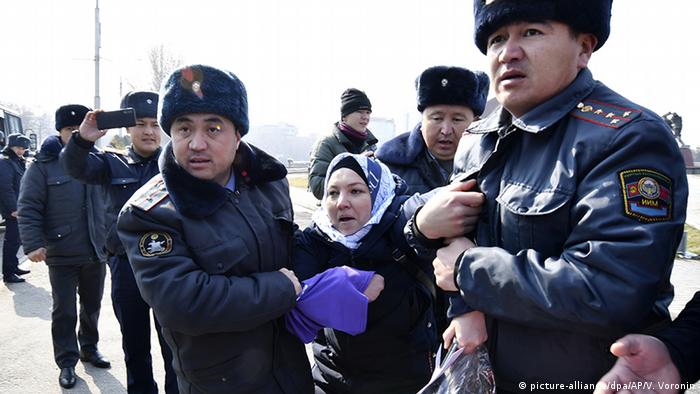 Kyrgyz police arrested dozens of female protesters and rights activists on Sunday after an unauthorized rally to mark International Women's Day was broken up by a group of masked men.

The disorder took place after activists gathered in one of the squares of the capital Bishkek to stage a march of solidarity against gender-based violence.

Citing multiple cases of forced marriage and domestic violence, activists say women's rights are deteriorating in the former Soviet republic of 6 million amid a resurgence of right-wing ideology. 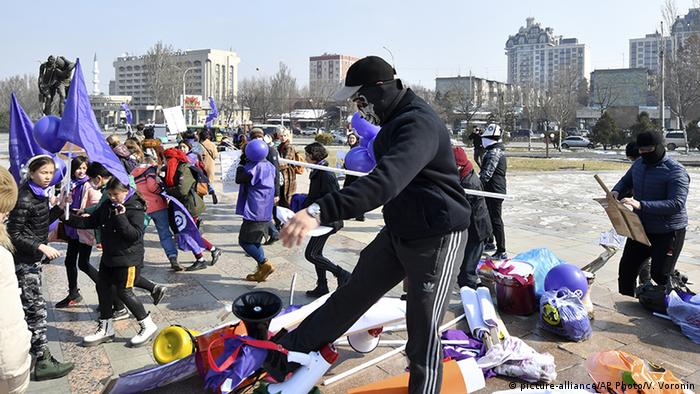 The women protesters were attacked by masked men, some of whom wore traditional Kyrgyz white felt hats

But the women protesters were attacked by masked men, some of whom wore traditional Kyrgyz white felt hats. The attackers barged into the gathering and tore up posters, popped balloons with toy pistols as well as threw eggs at the women.

The assailants left as soon as police arrived on the scene and proceeded to detain about 50 activists, mostly women.

It was unclear what charges they could face.

Erlan Atantayev, deputy head of the Sverdlovsky police department where the women were taken, told AFP the protesters had been detained for their own safety and because police had not been warned about the rally.

"Clashes began between the demonstrators and men wearing the face masks," said Atantayev. "We detained (the women) for violation of public order."

Atantayev later said that all the demonstrators were released within hours of detention but added that some could face fines for resisting police.

Anja Blacha, Lhakpa Sherpa and Dawa Yangzum Sherpa celebrate success in extreme mountaineering or in the eternal ice. Again and again they have to contend with prejudices in the male-dominated adventure scene. (07.03.2020)

German Chancellor Angela Merkel says that men also have a role to play in improving gender equality. She noted that while the country has made progress on the issue, there is still work to be done. (07.03.2020)