Poland vows not to pay any EU court fines

Warsaw has reacted with outrage to the European Court of Justice ruling to impose a daily fine of €1 million. Opposition lawmakers have accused the government of acting irresponsibly and wasting Polish taxpayers' money. While the ruling government has spoken out against the EU, most Poles want to remain in the bloc

What many in Poland had suspected, and even feared, has now come to pass: The European Court of Justice (ECJ) has imposed a daily fine of €1 million ($1.2 million) on the country over its judicial reforms. This comes on top of the €500,000-per-day fine imposed in September after Poland refused to shut down the Turow coal mine on the border with the Czech Republic. And there are still other proceedings on judicial reform pending in the Luxembourg-based court.

"The [ruling Law and Justice party] PiS is an expert in wasting Poland's money," said Kamila Gasiuk-Pihowicz of the opposition Civic Platform. "Not only are they destroying the independence of the judiciary, but doing so at the Poles' expense."

Speaking at a press conference on Thursday, Justice Minister Zbigniew Ziobro said the "Polish state cannot bow to lawlessness. He said Poland "cannot and should not pay a single zloty, [local currency]," either for "the illegal sanctions against Turow" or for the "changes to the judiciary." And he advised Poles to keep calm.

Warsaw has yet to dismantle disciplinary chamber

The ECJ announced the fine on Wednesday, with seven cases still pending before the controversial disciplinary chamber set up by the PiS. Yet, in his most recent address to the European Parliament, Polish Prime Minister Mateusz Morawiecki, like PiS leader Jaroslaw Kaczynski before him, had said the disciplinary chamber would be dismantled "in its current form," not because of the ruling in Luxembourg, but because the institution was failing to fulfill its tasks. The first plans for reform were already due to be presented in September, but the deadline came and went with no changes. 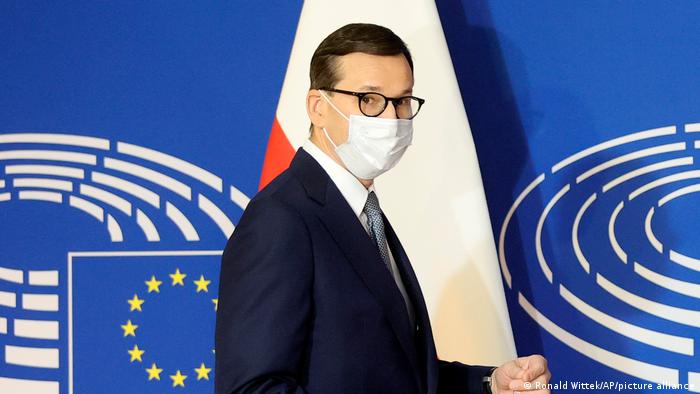 Borys Budka, the former head of Civic Platform party, said Wednesday's ECJ ruling was the result of a breach of promise by Warsaw. "There is no bill to abolish the disciplinary chamber and we expect, indeed we demand, that there be a parliamentary debate already tomorrow on how to dismantle the disciplinary chamber and ensure that Poland — that is, in reality, the Polish people — do not end up having to pay these enormous fines because of Kaczynski's absurd obstinacy," he said.

Ryszard Terlecki, a top member of the right-wing PiS, told the Polish Press Agency that the necessary documents for abolishing the chamber were already available but admitted that "we are a bit late." However, he said there was no need to panic because it would only take a few weeks. "We haven't paid anything yet," he said.

Is €1 million a day a fair penalty?

Marcin Romanowski, a deputy justice minister with the euroskeptic United Poland party — PiS' junior partner, which is headed by Ziobro — also suggested that the funds would never be transferred. "The (non-) ruling by the ECJ is an encroachment on the competences of the Polish government and should be ignored," he wrote on Twitter. "Maybe stopping our EU payments can bring the Eurocrats to their senses?"

But that would be bad for business — Poland remains one of the biggest net recipients of EU funds. Brussels has yet to approve the release of €24 billion in grants from the bloc's COVID-19 recovery funds. The money has been withheld for weeks over concerns over the rule of law, and Warsaw has expressed outrage over this "unlawful" move. If Poland fails to pay the ECJ fines, it will be entering uncharted legal territory. Legal experts believe this might involve some kind of offsetting of the funds owed to Poland.

No one else from the government has gone as far as Romanowski, but some have resorted to rhetoric that implies they will not give in to Brussels. Sebastian Kaleta, another deputy justice minister, spoke of an "attempt to subjugate Poland with the help of unlawful means and to rob it of its sovereignty."

Government spokesman Piotr Müller insisted Warsaw's judiciary reforms would continue. "Fines and blackmail are not the right way, and not a model for a functioning union of sovereign states," he said. His deputy Radoslaw Fogiel, meanwhile, appealed to his compatriots' national pride, saying they should keep sovereignty and national identity in mind.

Lack of EU funds 'can have far-reaching consequences'

Regardless of whether the PiS leadership is looking for a way to retreat, the question is whether this might already be impossible. After all, the controversial ruling by the Polish Constitutional Court in Warsaw on the primacy of national law deprived the EU and the ECJ of all competences in the legal area, according to anyone who takes this ruling seriously.

Deputy Prime Minister Kaczynski also recently insisted that the EU had no say in this area and claimed that the proposed dismantling of the controversial disciplinary chamber was to see whether there was "at least a minimum of goodwill" in Brussels.

Some have speculated as to why the disciplinary chamber has yet to be dismantled and believe there may be a power struggle going on behind the scenes, with Justice Minister Ziobro blocking the move. Wadim Tyszkiewicz, an independent senator, spoke of the "drama" recently on Polish television. He said PiS was driving the country into a wall, and warned of an unpleasant collision.

"I have a background in local government, and I know the importance of every zloty," he said. "That much money can have far-reaching consequences. Whenever we think we've hit rock bottom, we see that there is no bottom and we're falling even further."