Protesters have rallied across Poland after the government signaled it planned to withdraw from the Istanbul domestic violence convention. Some officials have said the pact could endanger the traditional family. 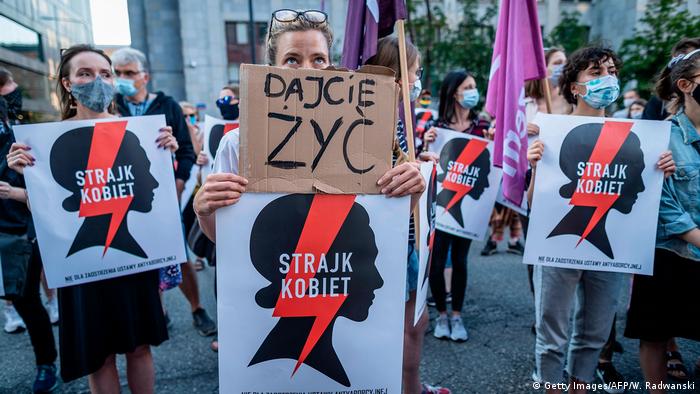 The signs read 'Let us live' and 'Women' strike'

Tens of thousands of protesters, most of them women, demonstrated across Poland on Friday amid concerns the government may be seeking to undermine women's rights in the country.

The rallies were triggered by a recent announcement by the minister for labor and social policy, Marlena Malag, that Poland was preparing to leave the 2011 Istanbul Convention, known in full as the Council of Europe Convention on Preventing and Combating Violence against Women and Domestic Violence. 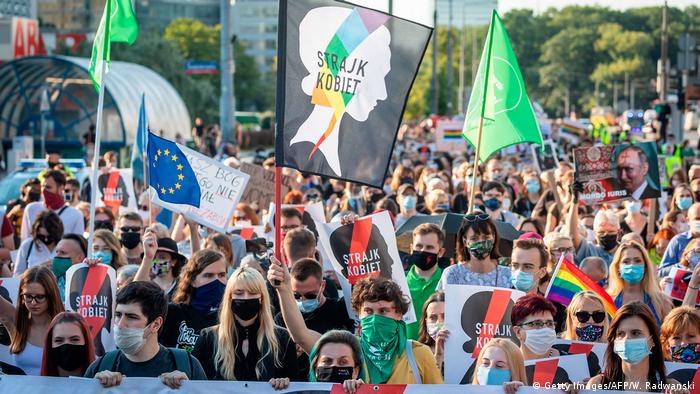 The largest protest was in the capital. 'Strajk Kobiet' on these banners translates as 'Women's Strike'

In the capital, Warsaw, a crowd of several hundred protesters gathered before the headquarters of Ordo Iuris, an ultra-conservative association that has campaigned against the convention and claims the document's only aim was to impose controversial ideologies about gender.

These views were echoed this week by Deputy Justice Minister Marcin Romanowski, who described the pact as "gender gibberish" and called for Poland to withdraw from it as soon as possible.

Poland ratified the convention in 2015, before the conservative Law and Justice party (PiS) took power. It is the only country in the so-called Visegrad Group to have ratified the pact, though Czech Republic, Slovakia and Hungary signed it in 2011 along with most other European states.

The UK also has still to ratify the convention, along with Latvia, Lithuania, Ukraine, Bulgaria, Armenia and Moldova. Russia has not signed it.

Poland has faced criticism in the past, notably from Amnesty International, over the state of women's rights in the country.

Last year, Poland backed down on plans to make the term domestic violence apply only when spouses are beaten more than once, after a draft bill published on a government website drew a storm of criticism.

The ruling PiS is known for its socially traditionalist stance, notably on LGBT+ rights and abortion.