At least five people, including two children, have been killed during an electrical storm in the Tatra Mountain range along the Polish-Slovak border. Rescue personnel are continuing to look for survivors. 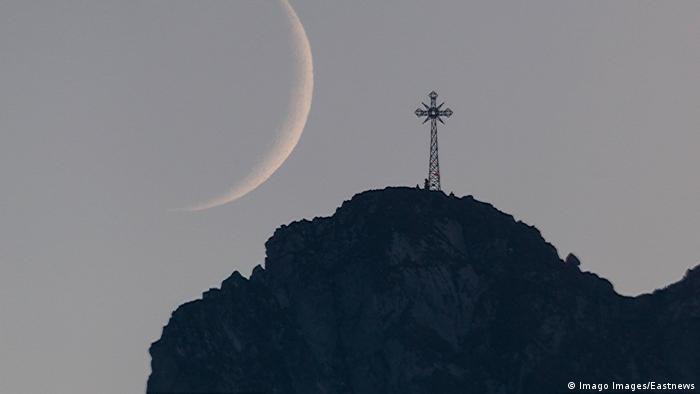 The summit of the Giewont mountain in the Tatra Mountains. The cross seen here at the peak was struck by lightning

At least five people were killed, including two children, and more than 100 injured after lightning struck in the Tatra Mountain range on the border of Poland and Slovakia on Thursday.

Four were killed on the Polish side, among them the two youngsters, a spokeswoman for the Polish air ambulance service, Kinga Czerwinska, told broadcaster TVN24. Slovak authorities confirmed one person died on their side of the range.

"More than 100 people are injured," Poland's Prime Minister Mateusz Morawiecki said after arriving in the nearby mountain resort town of Zakopane.

Many of the wounded suffered severe burns or head injuries.

The Tatra Mountains lie on the Polish border with Slovakia and form a natural divide between the two countries, around 110 kilometers (70 miles) south of Krakow.

Poland's voluntary mountain rescue organization, TOPR, said rescuers had been sent to the Giewont summit, which overlooks Zakopane, where a group of people, among them children, had been struck by lightning.

A bolt hit a 15-meter-high (49-foot-high) metal cross at the mountain's 1,894-meter peak and is believed to have been the principal cause of the fatalities. The cross was installed in 1901.

Read more: The world's weather is getting more extreme

Kinga Czerwinska, of the Airborne Ambulance Service, said four helicopters had been sent out to help the injured, as well as to search for survivors.

"There were a lot of incidents involving lightning strikes today in the Tatras," Krzysztof added. "We heard that after lightning struck, people fell... the current then continued along the chains securing the ascent, striking everyone along the way. It looked bad," Krzysztof said.

At the beginning of the day, the weather was favorable, but conditions deteriorated as the day progressed, culminating in the storms.

Parts of Germany have come to a standstill after storms and torrential rain, especially in the south. One person died and daily life has been disrupted. The worst weather appears to be over, for now. (21.05.2019)

A narrow window of good weather has led to deadly overcrowding on Mount Everest. Most of the 10 deaths this month occurred after climbers spent too much time in the "death zone." (25.05.2019)

Ten people were injured, including five children, when lightning struck a family celebration in the German state of Saxony-Anhalt. Some of the partygoers had been holding onto metal tent polls when the lightning hit. (29.07.2018)

The ambassador was spat at in his car near the Polish embassy in Tel Aviv, according to police. Prime Minister Mateusz Morawiecki called the incident a "racist attack;" Israel said it was "a top priority" to investigate. (15.05.2019)