The deputy prime minister said the EU's top court was being used to promote federalist ideas. The comments come as Poland and the EU are embroiled in a conflict over judicial changes launched by Poland's leading party. 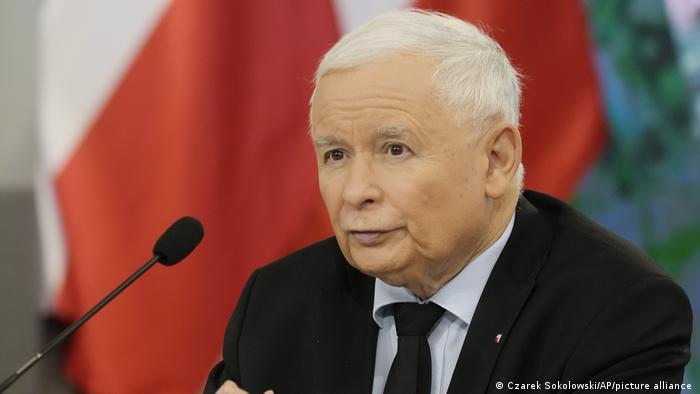 Poland's deputy prime minister and the leader of its ruling party, Jaroslaw Kaczynski, accused Germany's new government of wanting to turn the European Union into a federal "German Fourth Reich."

In an interview with far-right Polish daily GPC published on Friday, the head of the Law and Justice (PiS) party said that some countries "are not enthusiastic at the prospect of a German Fourth Reich being built on the basis of the EU."

"If we Poles agreed with this kind of modern-day submission, we would be degraded in different ways," said Kaczynski.

He added that the EU's Court of Justice was being used as an "instrument" for federalist ideas.

Other PiS leaders have recently used the same phrase to describe the intentions of Berlin's new center-left coalition government toward the European Union.

The agreement forged by the three parties to form Germany's ruling coalition states that its ultimate goal is a federal European state. This aspect of the agreement was condemned by Poland's PiS government, with Kaczynski even claiming such a state would take away Poland's right to self-determination.

Poland has been involved in a long-standing conflict with the European Union, particularly over the judicial changes that the PiS has pushed through since 2015.

This week, the European Union said it was launching legal action against Poland for ignoring EU law and undermining judicial independence. Poland has also accused the EU of "bureaucratic centralism."

Annalena Baerbock, Germany's new foreign minister, discussed the Poland-Belarus border and issues over rule of law during her inaugural visit to Warsaw.