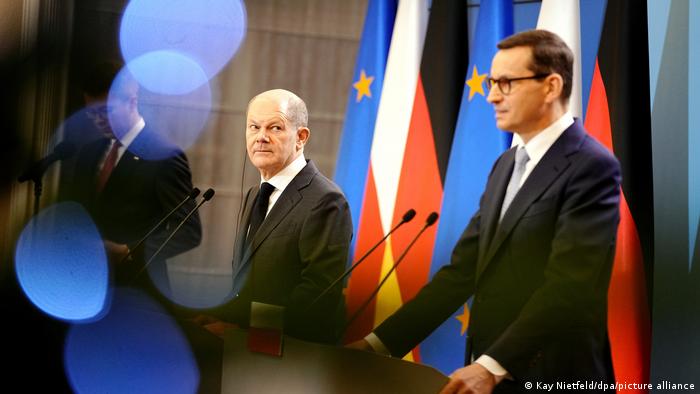 Four days after taking office, German Chancellor Olaf Scholz paid an inaugural visit to neighboring Poland on Sunday, where he aimed for closer ties with Warsaw despite political disagreements with the Polish leadership.

Tensions with the Kremlin over its military build-up near Ukraine have cast a shadow over the diplomatic discussions, amid fears of a possible Russian invasion.

As a result, Morawiecki said Sunday the Nord Stream 2 gas pipeline is becoming untenable, as it increases Moscow's options with which to exert pressure on the EU, "tightening the political noose" around Ukraine.

Berlin is under pressure from Poland and the United States to delay the launch of the Nord Stream 2 gas pipeline between Russia and Germany if Moscow does enter Ukrainian territory.

"It is important that Europe makes clear together that we will not accept this and that we do not agree with what is happening there," Scholz said on the threat of a Russian invasion. "We will not accept a violation of those borders."

Nord Stream 2 has been widely criticized as leaving Europe vulnerable to the Kremlin's influence on energy supplies as the pipeline brings Russian gas straight to Europe without the need to transit through Ukraine.

Scholz said he would back plans to continue pumping gas through Ukraine from Russia while funding the country's green electricity efforts.

"We will also help Ukraine be a country that will be a major source of renewable energy and the necessary production that results from that. We are in concrete talks around how we can help achieve that," said the new German leader in Poland.

Morawiecki has said he would urge Scholz to delay the granting of permission for the pipeline to begin operations.

Another key issue that was discussed in Warsaw is the ongoing migrant crisis at the Polish-Belarusian border.

And on Sunday, Scholz backed Poland's efforts to stop groups of migrants seeking entry from Belarus. The European Union accuses Minsk of pushing the migrants, who are now stranded at the Belarusian border with Poland, in what it describes as a "hybrid attack" against the bloc.

The actions of Belarusian leader Alexander Lukashenko were "inhumane and we have a common task to repudiate such acts," Scholz said during his meeting with Polish PM Morawiecki.

Scholz added that Berlin would stand in solidarity with Warsaw against what he described as Lukashenko's "hybrid warfare."

Morawiecki responded by saying: "I described to the Chancellor the changed tactics that the Lukashenko regime is now using in this artificially triggered migration crisis, the use of people as living shields, as weapons."

Poland's row with the EU over judicial independence has also become a priority for Scholz.

The European Court of Justice has imposed fines on Poland after it found that judicial reforms passed by the right-wing Law and Justice (PiS) party breached EU law.

Poland has refused to pay the fine and its own top court has ruled that Polish law can take precedence over EU rules.

Ahead of the visit, Scholz admitted to German public broadcaster ARD that differences remained, particularly concerning the rule of law issue, but said he hoped the dialogue will continue at EU level.

Visit to end with wreath-laying ceremony

Sunday's meeting also marked the 30th anniversary of the Treaty of Good Neighbourship and Friendly Cooperation between Poland and Germany.

At the end of the visit, Scholz was expected to lay a wreath at the Tomb of the Unknown Soldier, Poland's central memorial for soldiers who gave their lives for their country.

Warsaw is the third European capital that Scholz has visited since taking office as German chancellor on Wednesday.

He has already paid visits to Paris and Brussels since his new center-left coalition government sent Angela Merkel's conservatives into opposition as she retired from politics.

Scholz: 'German politics has to take on a role of responsibility'

German Foreign Minister Annalena Baerbock made her own inaugural visit to Warsaw on Friday.

She said Germany was banking on a mutually acceptable solution to Poland's rule of law issues flagged by Brussels.

The new German coalition has emphasized that they want to work for a European Union "that protects its values and the rule of law both internally and externally."

"Uniformity and egalitarianism are not good courses of action," Morawiecki said after his meeting with the chancellor.

"Europe will be strong if it is a Europe of sovereign states," he said.

Putin expressed the devastating effect the demise of the USSR had on him and millions of others, admitting he took up driving a cab during hard times, even though he said "it's unpleasant to talk about."