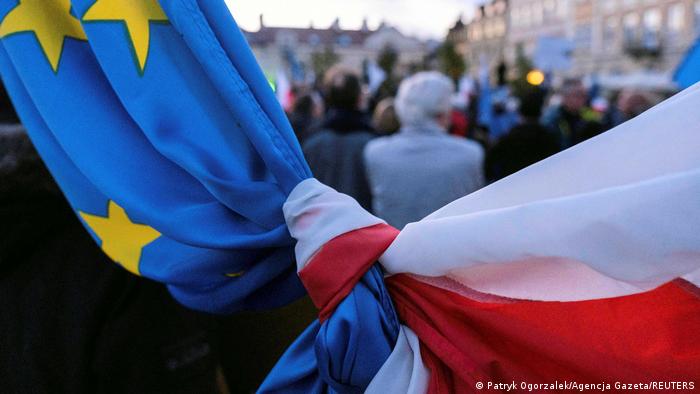 The European Commission on Wednesday announced it was starting an infringement procedure against Poland for undermining EU law and the independence of its national judiciary.

The move comes amid an ongoing spat between Brussels and Warsaw over judicial independence and the rule of law.

An infringement procedure begins with the Commission sending an EU country a formal notice. It could lead to financial penalties if the member state fails to fulfill its obligations under EU law.

Warsaw has two months to reply to the formal notice of legal action.

Why is the EU taking steps against Poland?

The Constitutional Tribunal had said that law out of Warsaw could take precedence over laws coming from Brussels.

The court had looked specifically at the compatibility of provisions from EU treaties — which are used by the European Commission to justify having a say in the rule of law in member states — with Poland's constitution.

However, the European Court of Justice (ECJ) had ruled that the EU could force member states to disregard certain provisions in national law, including constitutional law.

The EU Commission said Wednesday that it considered the ruling by Poland's Constitutional Tribunal "in breach of the general principles of autonomy, primacy, effectiveness and uniform application of Union law and the binding effect of rulings of the Court of Justice of the European Union (ECJ)."

It also raised "serious concerns as to the impartiality of judges of the Constitutional Tribunal," citing the process of appointing them.

How did Poland respond?

In remarks broadcast on national television, Polish Prime Minister Mateusz Morawiecki said Wednesday's move by the EU showed that "a trend for... bureaucratic centralism is unfortunately progressing in Brussels but it has to be stopped."

Sebastian Kaleta, a Polish deputy justice minister, said the EU's move was an attack on his country's sovereignty.

"The EC [European Commission] is initiating proceedings and wants to subordinate the Constitutional Tribunal in Poland to EU law," he wrote on Twitter. "This is an attack on the Polish constitution and our sovereignty."

Poland has repeatedly slammed the EU's rulings and threats, refusing to back down in the row.

Tensions between Brussels and Warsaw have been simmering since Poland's ruling nationalist and euroskeptic PiS party took power in 2015.

The ongoing standoff over the rule of law has delayed the release of billions of euros from EU COVID recovery funds to Poland. The Commission says Polish courts are not independent from political influence and therefore funds are not protected from misuse.