Weapons have played a key role in helping Ukraine defend itself against Russia's invading forces. Now the arms lobby is pushing for investors and EU regulators to classify the industry as "sustainable." 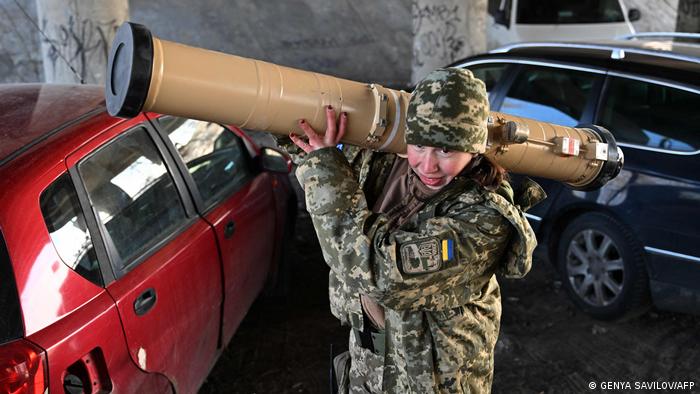 Just a few months ago, many people believed they'd never witness war on the ground in Europe in their lifetime. Now, some 30 years after the end of the Cold War, the chance that Russia deploys nuclear weapons in Ukraine is "not zero," as one nuclear strategist told The New York Times earlier this month. But Russia's war on Ukraine is also changing the conversation around more conventional weapons.

Defense companies have found themselves cut off from some pension and sovereign wealth funds in recent years, as investors have soured on the controversial industry. There is a growing appetite among both retail and institutional investors for the stock of companies that take environmental, social and corporate governance (ESG) criteria into account alongside financial return.

Hypersonic missiles show 'Russia is not going to back down'

The European Commission wants to support this trend with its social taxonomy, part of the European Green Deal. This regulation, currently in development and likely still years away, will define which economic activities are considered "green" (sustainable) as opposed to "brown" (unsustainable) and will therefore qualify for special EU funding.

Many criteria, though not all, used by sustainable investment funds exclude the stock of companies in the aerospace and defense industry because of their role in producing weapons.

But the war in Ukraine has cast a new light on the arms industry. As governments seek to back Ukraine without directly engaging with Russia, gifting state-of-the-art weaponry has become one of the strongest ways for military powers to signal their support. In a stark policy shift, the German government recently promised to send 1,500 anti-tank and anti-aircraft missiles to Ukraine.

The nearby conflict has also sent European governments scrambling to build up their own military strength. After years of resisting US pressure, last month Germany said it would allocate €100 billion ($110 billion) to a special fund in 2022 to top up its defense budget and raise it above the 2% of GDP required by NATO.

"We will have to invest more in the security of our country to protect our freedom and democracy," German Chancellor Olaf Scholz said at the time.

Defense stocks surged following the news. The arms lobby and some financial institutions are seizing the moment to push their argument that defense companies should be included in ESG frameworks.

The contribution of weapons makers to "defending the values of liberal democracies and creating a deterrent, which preserves peace and global stability" is a prerequisite for addressing other social issues, two analysts at the US investment bank Citi argued in a series of recent notes.

Swedish bank SEB has already adjusted a brand new sustainability policy to now allow its funds to invest in the defense sector.

A leap of logic

But the big fish the industry has its eyes on is the EU's taxonomy, which the European Commission intends to be the "gold standard" guiding public and private money toward sustainable projects.

"The invasion of Ukraine shows how important it is to have strong national defense," Hans Christoph Atzpodien, head of BDSV, a German defense industry lobby group, told Bloomberg. "I appeal to the EU to recognize the defense industry as a positive contribution to 'social sustainability' under the ESG taxonomy."

But many people engaged with sustainable finance have balked at this argument.

"Sustainable industries help us to become independent of totalitarian regimes," said Andrew Murphy, director of Murphy&Spitz, a sustainable asset management firm in Germany that has been active since 1999. He pointed to measures like expanding the use of renewable energies and improving public transportation.

"This is what needs to be promoted," he told DW by email. "Not the arms industry, not weapons that kill innocent people, destroy habitats and — in the wrong hands — enable wars of aggression by power-hungry rulers.

"If Europe had considered sustainable issues much more consistently, we wouldn't have ended up in the terrible situation we are facing today," he added. "The failure to focus on the most economically and ecologically viable forms of energy, namely energy from wind and solar, is what enabled [Russian President Vladimir] Putin to wage wars of aggression in the first place."

Somewhere between green and brown

Professor Klein is open to discussing whether defense companies fall into an ethical gray zone, akin to where nuclear energy and the fossil fuel industry currently find themselves.

It's this misunderstanding that has companies of all stripes frustrated at the prospect of being left out of the EU's taxonomy.

"It's because you have nothing to do with climate change," said Klein. "You're selling haircuts or something. That isn't bad. It's nothing.