The world’s favorite root vegetable, the humble potato comes in all shapes and sizes. And nowhere is that diversity more apparent than in Peru. The country is home to over 4,000 varieties of tubers. Researchers are also working on creating more resilient and nutritious spuds that can defy warming temperatures. Discover the mysteries and traditions surrounding the “real gold” of the Incas.

The world’s favorite root vegetable, the potato, comes in all shapes, colors and sizes. Though only a few varieties of the spud are known in many parts of the world, in reality there are thousands. Peru alone is home to over 4,000 tuber varieties ranging from deep yellow to purple and red.

The colorful potatoes aren’t just pretty to look at, they also indicate a high level of vitamins, carotene and antioxidants. That means they are just what is needed to fight malnutrition in parts of the world. Indeed, potatoes are the world’s third most important food after rice and cereals. Some 365 million tons of potatoes were harvested around the world in 2012, the majority in China.

Many potato varieties also mature quickly - within three to six months - so that they can be grown in the break between two rice harvests. And, because they are so easy to cultivate, the tuber could play a key role in future in securing the world’s food supply. But, that can only happen if the genetic diversity of potatoes is preserved. It’s only when the gene pool is sufficiently large and diverse can more resilient and robust varieties emerge that are well-equipped to cope with rising temperatures and are high in nutrition and easy to grow. That’s exactly what researchers at the International Potato Center (CIP) in Lima are working on. They are collecting, examining and cataloging the world’s tuber varieties and are working closely with local farmers and drawing on their knowledge about the best cultivation methods.

Both the preservation of different potato varieties as well as cooperation between farmers and scientists is hugely important as was seen in the 1980s and 1990s in Peru. Back then, the terrorist organization “Sendero Luminoso” spread fear, prompting people to flee from the countryside into the city. They left behind their farms and the many potato varieties that were often planted on just a few fields. By the time the group was disarmed and people returned to their fields around 2000, many tuber varieties were lost. But the farmers were compensated with seeds from the CIP in Lima which their ancestors had brought to the organization. Those tuber varieties are now flourishing high up in the Andes. 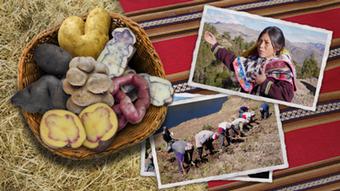