People of Halle commemorate synagogue attack | Germany | News and in-depth reporting from Berlin and beyond | DW | 09.10.2020

Steinmeier: 'It is not enough to condemn this attack'

"I have come here with mixed feelings," said Josef Schuster, president of the Central Council for Jews in Germany. He appeared outside the synagogue on Friday, just as he did the day after the attack. "I am still very aware of the mood from when I was here back then... The memory still triggers pain and trepidation." 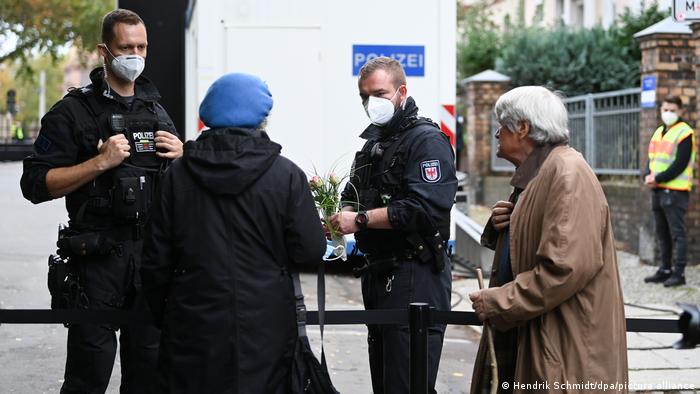 Schuster also talked about the locked door to the synagogue, which likely saved the lives of the 52 people inside celebrating Yom Kippur. It has now been integrated into an artwork unveiled at the scene on Friday. "This door withstood the attacker, yet it was a sign of destruction … a sign of the destructive world-view of this perpetrator."

"Germany is our home. Halle is the home of this community," said Schuster. "Halle is also the home of the family and friends of [the victims] Jana L. and Kevin S. And we won't let this home be taken away from us."

Alongside the official commemorations, an alliance of local NGOs had come together under the name "Halle gegen Rechts" (Halle against the Right) to mount an alternative series of public events and exhibitions around the city.

These were meant to bring the attack and its consequences out among the people of Halle: Two minutes' silence was held by a busy intersection at midday, and colored chalk was left in pots along the sidewalks, with which passers-by were invited to help draw a chain of human figures around the city. Meanwhile, the state's "democracy conference" — an official event where survivors exchanged experiences — was live-streamed on big screens in the town square."

Read more: One year after the attack - Do German Jews feel safer?

These events were also meant to bring a more critical tone to the commemorations, co-organizer Torsten Hahnel explained. "The state commemorations are right of course, but in part they lack a feeling for what concerns the city society, and civil society, and the victims," he told DW. "Obviously this affected the city, you can see people are working through it."

But Hahnel also observed that the way the minutes of silence were received reflected some of the public apathy: While a few dozen people turned up to stand in silence by the side of the road, the cars continued to stream by, some with loud music emerging from their windows. "You always ask yourself with every new far-right attack: Where is the awareness? Why do so few people see it? Why isn't there ever really a jolt in society that says: We're won't accept this any longer?" said Hahnel. "Why don't people discuss everyday racism?"

A central element of this alternative commemoration was a large exhibition in various locations, entitled "Room of Memory and Solidarity." In several rooms, alongside memories of the two people who lost their lives, Jana L. and Kevin S., it included the statements of many of the co-plaintiffs and witnesses of the trial of attacker Stephan B., currently going on Magdeburg, as well as detailed accounts of the trial days recorded by NGOs.

This exhibition made as its theme some of the investigative failures criticized by many of co-plaintiffs during the trial.

"The center of it is the perspective of the victims," Hahnel said. "Listen and watch what the victims say, that's the main message." 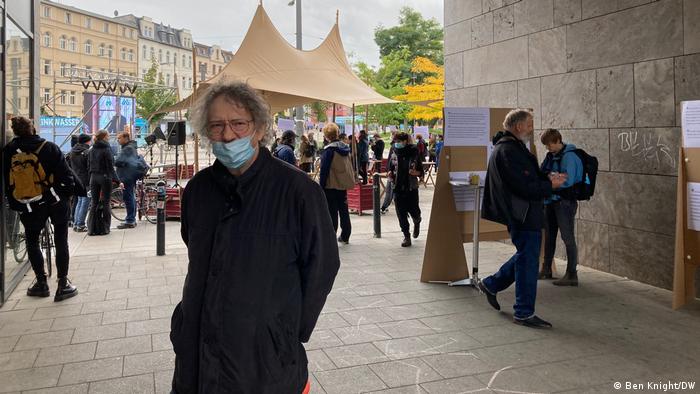 Among the onlookers at the event was Andreas Splett, an eye-witness who filmed part of the shooting outside the kebab shop, and subsequently received death threats from far-right extremists.

"It was a few days later when we started getting phone calls. People openly threatened me with murder," he told DW.

He also said he had a good idea of why he was targeted — because he appeared on TV and blamed the influence of Germany's far-right Alternative for Germany (AfD). "A few hours after the attack I said I saw connections between this attack and right-wing hate speech," he said. "In this case, I said the AfD should think what it is doing, and what moral responsibility it has for this attack."

"Being here today is an important way to process it," he told DW. "I see this event as essential." 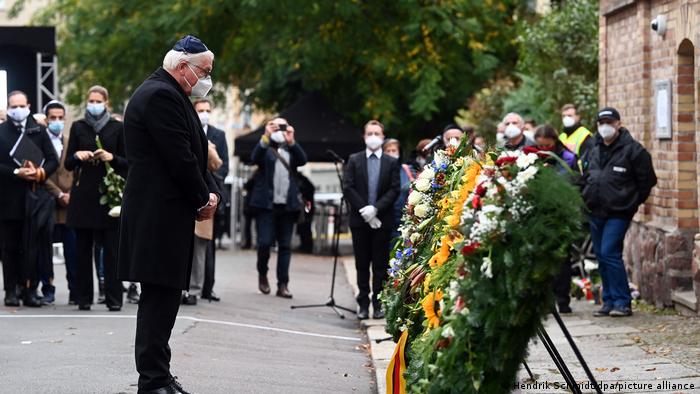 After the wreaths were laid, both at the synagogue and the Kiez Döner kebab shop where one of the victims was killed, Steinmeier gave a speech at a church in the city center.

"Two people were murdered in cold blood because they were in the wrong place at the wrong time," the president said. "For their loved ones, nothing is as it was before. As president, I want to tell you, the relatives, today: We stand on your side. All of us. The people of our country mourn with you. We will not forget."

Steinmeier used his speech to address the dangers of what many see as growing anti-Semitism in Germany. "Because anti-Semitism is a seismograph of the state of our democracy," he said. "The more openly it is expressed, the more our values, tolerance, and respect for human dignity are under attack."

"It fills me with shame and rage: That it is necessary to protect Jewish places of worship in our country. That it is part of the everyday lives of Jewish children that they go to heavily-guarded kindergartens and schools," he said.

Steinmeier: 'It is not enough to condemn this attack'