Pentagon: 'IS' has lost over 25 percent of land in Iraq

A US-led aerial campaign has pushed back "Islamic State" ("IS") militants from a substantial portion of land captured in Iraq, the Pentagon says. The news comes ahead of high-profile Iraqi-US talks in Washington. 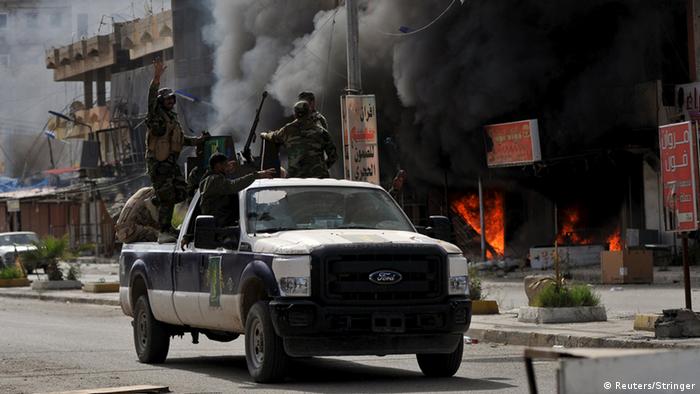 Speaking to reporters at the US Department of Defense, Army Colonel Steven Warren confirmed that coalition forces had regained control over roughly one-third of IS' territory.

The Islamist extremist militants lost key fighting areas, such as the Mosul Dam, Zummar and land near the Sinjar Mountain and were generally driven west or south.

Warren also confirmed on Monday that coalition forces had "substantially retaken" the corridor north of Tikrit and that they expected to retake the city "relatively soon."

Although other reports have indicated losses for IS in Iraq, the extremist organization continues to control large swathes of Syria and has been making gains there in recent weeks.

The announcement by the Pentagon came ahead of a high-profile meeting between Iraqi Prime Minister Haider al-Abadi and US President Barack Obama on Tuesday. The two leaders were expected to discuss an increase in US airstrikes and financial support to the war-torn country.

Political instability and sectarian violence facilitated the jihadists' invasion of northern Iraq last year. Now the US is assisting the Iraqi government with military training so that it can restore control over its land. The total cost to the coalition operation topped $1.8 billion (1.7 billion euros) in March.

Al-Abadi has been appealing to international leaders for support, including German Chancellor Angela Merkel in Berlin. As of February, Germany had set aside nearly 169 million euros in military aid for Kurdish peshmerga forces in Iraq's semiautonomous northern region.

"Islamic State" ("IS") militants have released more than 200 Yazidis in northern Iraq. The freed captives were reported to be in poor health, and showed signs of abuse and neglect. (08.04.2015)