In Berlin, Iraqi PM Haider al-Abadi pleads for help | World | Breaking news and perspectives from around the globe | DW | 06.02.2015

Iraq's prime minister says the "Islamic State" can be defeated this year - but only with the international community’s help. And, Haider al-Abadi adds, "Iraq is open for business." DW's Naomi Conrad reports from Berlin. 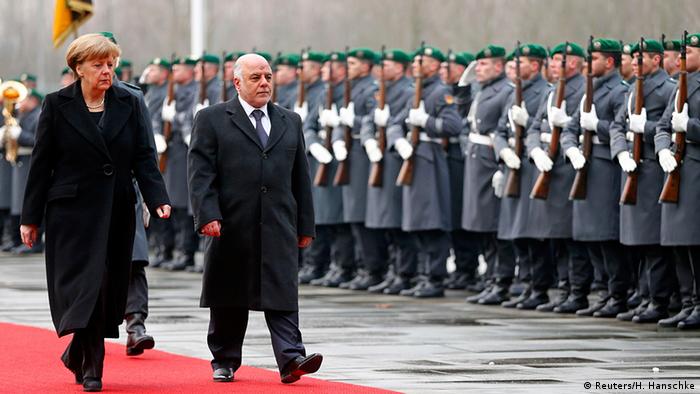 Standing under the glittering chandeliers of one of Berlin's luxury hotels, a few steps from a trestle table loaded with books and pamphlets on Germans fighting with extremist groups in the Middle East, Iraqi Prime Minister Haider al-Abadi told a room full of diplomats, politicians and journalists on Friday evening that his country could defeat the self-proclaimed "Islamic State," also known as IS or ISIL, within the year. "We won't rest until we retake the whole of the country."

But, he said as a cameraman inched closer, Iraq desperately needed the international community's support. "On our own, we cannot sustain the fight for victory," said al-Abadi, who returned from exile in Britain in 2003 and took over as prime minister last September.

Without weapons and air support, the war against the Sunni Islamists who now control wide swathes of both Syria and Iraq, including important Iraqi oil fields, would turn into a "war of attrition," al-Abadi added. As the war dragged on, ever more recruits were joining the extremists, he warned, many of them from Europe. "We are seeing more and more international fighters coming to Iraq." 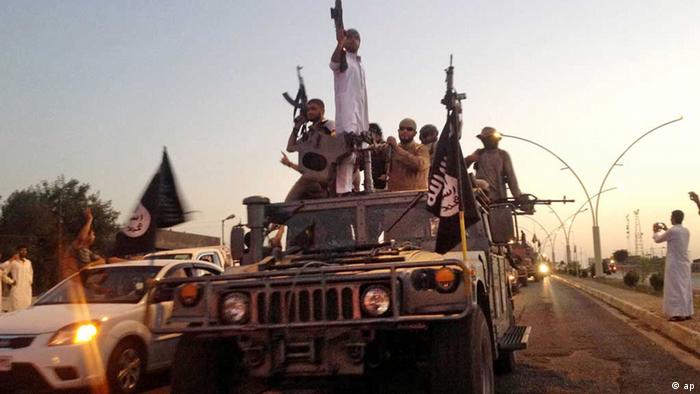 IS fighters captured Mosul in June

His country, he said, needed high-tech equipment to be able to gather intelligence inside the IS-controlled areas and track fighters, as well as training on how to deal with improvised explosive devices, often referred to as IEDs. "Daesh," he said, using the Arabic acronym for IS, often placed IEDs on roads, and Iraqi soldiers "are almost using their hands" to neutralize them.

His statements came after a meeting with German Chancellor Angela Merkel earlier on Friday. At a joint press conference, al-Abadi had told journalists that Baghdad had drafted a plan to recover the city of Mosul from the IS forces holding it. "I don't want to go into the detail, but this is an extensive, comprehensive plan, based on equipping the Iraqi and peshmerga troops, and based on coordination between the central and the Kurdistan government at the highest level," he said.

Last year, Germany supplied 70 million euros in military aid and training to the Kurdish forces in semiautonomous northern Iraq and today announced plans to provide a further 13 million euros ($15 million) in weapons, rocket launchers and armored vehicles to the peshmerga - but, in line with its earlier strategy, not to the Iraqi government.

After his speech in the evening, when asked what help he expected from Germany, al-Abadi said that the Iraqi government needed lethal weapons. Germany had supplied them to Kurdistan, he told the audience, so why not to Baghdad? It was time, al-Abadi said, to produce "coherent national security forces."

Al-Abadi said he would also "very much welcome German airstrikes against Daesh," referring to the US-led international coalition that is bombing IS strongholds. The strikes, al-Abadi added, "are helping us a lot. They are helping our ground troops move forward."

IS Terror: The fate of Yazidis

Once the current challenge of fighting IS was overcome, Iraq could fulfill its economic potential, al-Abadi said, stressing that his government was trying to diversify its economy, which was overly dependent on falling oil revenues. Iraq, al-Abadi said, "was open for business. We want foreign companies to put their money into our country."

The Iraqi government, al-Abadi said, was trying to foster entrepreneurship as well as foreign investment and would soon privatize several state companies in an attempt to kick-start the economy and create jobs.

Iraq's "massive unemployment is the best recruiter for violent extremism", al-Abadi added, stressing that "young men can disrupt around the clock only when they have no job to go to."

The Iraqi prime minister has ordered an end to a decade-old curfew in Baghdad. He is said to want a return to "normal life" in the capital, despite major security concerns. (05.02.2015)

Iraqi families have come north to escape the "IS" advance, but as Sunni Arabs they are viewed with suspicion and must remain on the outskirts of Kurdish-controlled Kirkuk. Cathy Otten visited a camp in Laylan. (03.02.2015)