Germany's lower house of parliament has approved a mission, which will see Bundeswehr soldiers sent to northern Iraq. They are to train Kurdish peshmerga forces fighting "Islamic State" militants. 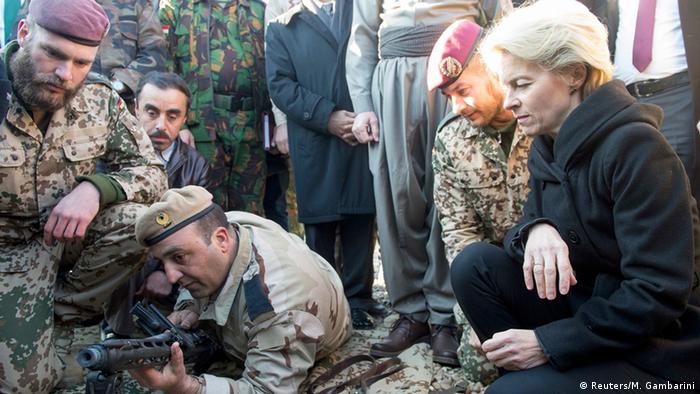 Lawmakers in the Bundestag, Germany's lower house of parliament, voted by a large majority on Thursday to send as many as 100 German soldiers to northern Iraq as soon as next month. A total of 457 parliamentarians voted in favor of the mission, 79 voted against and 54 abstained.

The outcome of the vote was never in doubt as the so-called "grand coalition" of Chancellor Angela Merkel's Christian conservatives (CDU/CSU) and the Social Democrats (SPD) hold more than 500 seats, out of 631, in the Bundestag.

Prior to the vote, Rolf Mützenich, an SPD member of the Bundestag's standing committee on defense, argued that by sending the soldiers to train Kurdish peshmerga fighters, Germany would be making a significant contribution to US-led international efforts to downgrade and defeat "Islamic State" militants, who control large swathes of territory in both northern Iraq and Syria.

The mission is, however, controversial as it is to be part of a coalition fighting the self-styled "Islamic State" without a United Nations mandate, and it is also not under the auspices of the Western military alliance NATO, leading to doubts about whether it is actually legal under Germany's constitution.

Article 24 of Germany's Basic Law states that the Bundeswehr can take part in missions abroad "under a system of mutual collective security." This has sparked an ongoing debate in Germany on whether the US-led coalition fighting IS qualifies as such a mutual system - as a NATO or UN mandate would.

Defense Minister Ursula von der Leyen dismissed such concerns, saying she had "full confidence in our constitutional department." Merkel's spokesman also said earlier this month that the government was confident the mission conformed with German law. However, parliamentary constitutional experts asked to look into the issue have expressed concerns about the legality of the mission.

Germany has already sent them 30 Milan anti-tank launchers and 500 missiles, as well as thousands of assault rifles and 7 million rounds of ammunition.

"The peshmerga are basically short of everything," von der Leyen said, adding that winter clothing and basic medical gear were among the priorities.

"By mid to late February, we'll be able to add arms and ammunition to that," she said.

Fifteen Bundeswehr soldiers are already in the northern Iraq town of Erbil, where they are acting as advisers to the peshmerga forces.

The first delivery of German arms has landed in Iraq after a delay caused by technical difficulties. The delivery marks a departure from a post-war policy to not send arms to conflict zones. (26.09.2014)

Field kitchens and rifles for Iraq

Germany's Bundeswehr is getting the first shipment of arms for Iraq ready in a military depot in the northern German town of Waren. DW takes a firsthand look at the arms before they're used to stop "Islamic State." (19.09.2014)