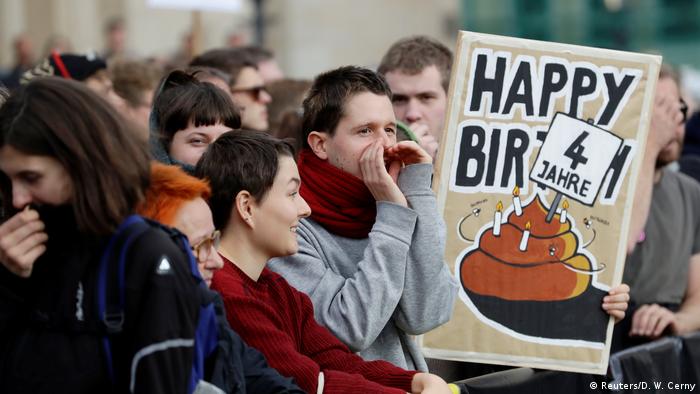 Thousands of people turned out on Sunday in the eastern German city of Dresden in defiance of a fourth-anniversary rally by the anti-immigrant PEGIDA movement.

The far-right group's march through the city took place at the same time and attracted between 4,000 and 5,000 people.

PEGIDA supporters gathered in front of Dresden's historic Frauenkirche, where one of their banners warned German Chancellor Angela Merkel "your days ... are numbered."

DW reporter William Glucroft, meanwhile, described how anti-PEGIDA protesters from a wide spectrum of German society had gathered outside the city hall.

One group carried a banner which read: "Solidarity against the shift to the right in Europe."

The state of Saxony's premier, Michael Kretschmer, addressed the crowd, telling supporters that their presence was an "important signal" against PEGIDA's message of xenophobia.

"It's important that we get involved and face those who only have simple answers," he added.

Anti-PEGIDA demonstrations, which were organized under various mottos including #HerzStattHetze (love not hate), saw as many as 10,000 supporters turn out.

Police said the demonstrations were largely peaceful, although there were five cases of bodily assault, including one case where a counter-demonstrator was shoved and another where a PEGIDA supporter was beaten by three unknown assailants.

PEGIDA — short for Patriotic Europeans Against the Islamisation of the West —  was formed in October 2014 by Dresden businessman Lutz Bachmann and saw support for its weekly rallies, urging tough immigration curbs, swell quickly.

The movement expanded to other cities and gained considerable publicity as tens of thousands of people joined their marches.

That helped boost the fortunes of the far-right political party Alternative for Germany (AfD), which emerged around the same time — initially with a euroskeptic ideology.

The AfD has since swung further to the right, adopting several anti-Islam policies. Despite massive opposition among many Germans, the AfD is now the largest opposition party in Germany's lower house of parliament, the Bundestag.

The AfD's strength, particularly in eastern Germany, could also see them topple Merkel's Christian Democrats (CDU) in next year's state election in Saxony. 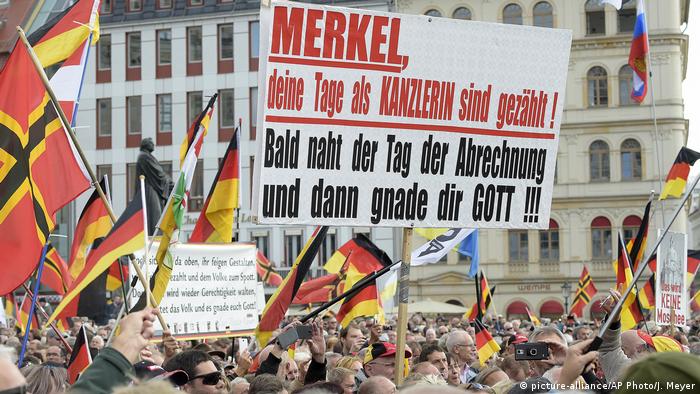 "Merkel, your days as chancellor are numbered, the day of reckoning is coming and God have mercy on you," one sign read

Support for both PEGIDA and the AfD was further bolstered by the 2015/16 migrant crisis, which saw more than a million people — many from Syria and Afghanistan — cross the Mediterranean and several European countries to seek asylum in Germany.

PEGIDA was one of several far-right groups to take part in the August 2018 protests in the eastern German city of Chemnitz that followed the deadly stabbing of a 35-year-old German-Cuban. The protests turned violent when far-right activists chased and attacked people of foreign appearance.

The movement has also spread to other European countries, where several smaller groups have emulated Dresden's "evening stroll" rallies.

Some of PEGIDA's political ideology may have taken hold in Germany, but the movement's own momentum has fizzled out somewhat.

Its rallies, which once drew crowds of up to 25,000, now see attendances of about a thousand people.

Glucroft told DW now the German government had addressed many of the issues in PEGIDA's program in terms of restricting migration, organizers are focused migrant behavior.

"Now they're turning to what they see as criminality, a lack of integration ... but, of course, a lot of statistics don't support that viewpoint, in terms of who's causing problems in Germany."

A scandal over police who blocked a TV crew at a far-right PEGIDA rally in Dresden continues to widen in Germany. The chancellor has also waded into the debate, coming to the defense of the reporters. (23.08.2018)