The dawn operation was the 35th camp clearance undertaken in the French capital over the past three years. Those living at the "Millenaire" camp in the northeast the city are being moved to temporary accomodation. 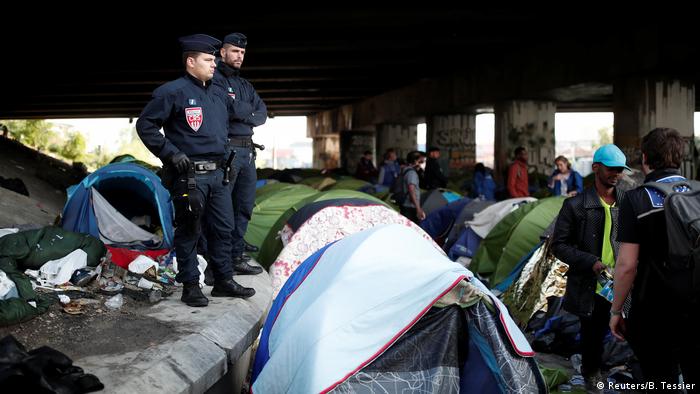 French security forces began the evacuation of the largest migrant camp in Paris on Wednesday morning, where up to 1,700 people, mostly from Africa, were living in makeshift conditions.

Riot police arrived at dawn to oversee the removal of the migrants, who were taken by bus to temporary accommodation centers elsewhere in the Paris region.

The clearance was ordered last week by the French government.

Interior Minister Gerard Collomb said in a statement that authorities would carry out identity checks on the migrants at more than 20 sites.

The "Millenaire" or Millennium camp ran along the Canal Saint-Martin, close to the Porte de la Villette metro station in the northeast of the French capital.

More camps to be cleared

Officials said two similar camp sites, along the Canal St Martin and the Porte de la Chapelle, which together house some 1,200 migrants will also be cleared shortly.

Paris has seen dozens of migrant camps surface over the past three years in the wake of the 2015/6 European migrant crisis, which saw 1.5 million people cross the Mediterranean escaping war and poverty in the Middle East and Africa.

An uptick in new arrivals was also noticed following the clearance of a huge migrant camp in the northern French city of Calais in October 2016, which at its peak housed some 10,000 people, according to aid groups. 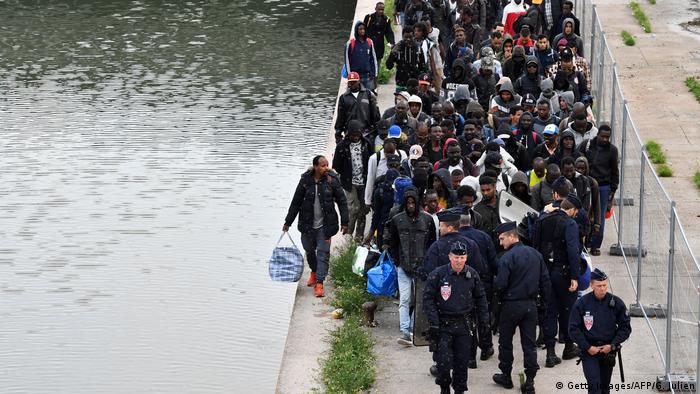 Some 1,700 migrants were cleared from the city's largest camp; several other camps will be targeted in the coming days

Wednesday's clearance was the 35th such evacuation in Paris over the past three years, but new camps have kept on springing up shortly afterwards.

French President Emmanuel Macron's government has said it wants to be both firm and fair on immigration, but it has taken a tougher stance lately, with parliament approving a bill that tightens asylum rules.

At least five people have been shot after a fight involving more than 100 Eritreans and Afghans erupted in Calais. The French interior minister blamed traffickers for "fueling daily violence and brawls." (02.02.2018)

African migrants trapped in Libya must be "evacuated," says French President Emmanuel Macron. Bound for the EU-Africa summit, he told Burkina Faso students that migrant trafficking was a "crime against humanity." (28.11.2017)

French President Emmanuel Macron says France wants more money from the UK and to negotiate a better police cooperation to handle the migrants in Calais. He made the comments during a visit to the French port town. (16.01.2018)

The whale was first spotted in the Seine river north of Paris several days ago. Rescuers are fighting hard to help him recover, saying though they have ruled out "euthanasia" for now.

The beluga whale that swam up the river that runs through Paris appeared underweight. The protected species is normally found in Arctic waters not near major European capitals.

Mothers often hear that "breast is best," but the WHO says that less than half the world's babies get breast milk within the first hour of being born. For World Breastfeeding Week, DW reports from France, which has one of the lowest breastfeeding rates in the world.