France is working on a new immigration law designed to streamline the asylum process. But aid workers fear the legislation could turn the country into a proper "expulsion machine," reports Lisa Louis from Paris.

France's cabinet this week okayed a draft immigration law that will go through parliament in the coming months. Migrants would in the future have less time to apply for asylum and appeal against rejections. The government would have the right to hold them in detention centers pending deportation for more than twice as long. Paris aims for the whole asylum process to only take six months instead of the current 14. The bill would also criminalize illegal border crossings, imposing a fine of up to €3,750 ($4,610) or a one-year jail term.

For many migrants, the new law is one more reason to distrust the government.

Ibrahim from Senegal (photo above, left) is one of them. His parents were killed by independence fighters in the southern region of Casamance. So early last year, he went on a dangerous months-long journey through Mali, Niger and Libya to start a new life.

But so far, France hasn't been the safe haven the 20-year-old was hoping to find.

Read more: Refugees in France balk at pressure to move off streets

Several months on from his arrival, Ibrahim is still living in a tent under a drafty bridge in northern Paris. Dozens of migrants have set up camp here, on both sides of the Canal Saint-Denis. The ground is littered with trash and rats run to and fro between the tents. The migrants call it the "Hotel of the 18th Arrondissement."

And they are not only having to face icy winds and freezing temperatures.

"The police often come here to tear-gas us," he told DW. "There was a time when they showed up almost every day. Sometimes they tear down our tents — just to cause mayhem." 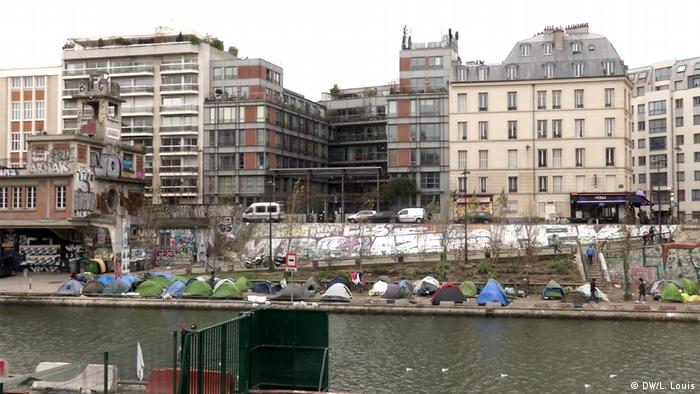 These tents of those who sleep rough have become a feature along the Canal St. Martin in Paris

Ibrahim says he is deeply disappointed in the French government.

"If someone had told me beforehand that this was happening in France, I would never have believed them. And France calls itself the country of human rights? This makes me feel sick."

'Migrants are not thugs'

Ibrahim has applied for asylum in France and could go to a public shelter. But he prefers to stay in his tent, where he feels less at the government's mercy.

"I'd rather die here then go to a government shelter," he muttered. "Migrants need to be respected, too. We are not thugs, thieves or beggars. Everybody could be in this situation, no matter what the color of their skin."

Aid workers claim the pressure on migrants has been mounting since centrist President Emmanuel Macron was elected last summer. Macron had, however, promised that, by now, no one would have to sleep rough in France anymore — be it homeless people or migrants.

There have been numerous claims by migrants that police have been taking away their tents and sleeping bags in Paris and in the northern town of Calais, where many go in the hopes of making it across the Channel to the UK.

"The government is obsessed with preventing migrants from setting up camp, as it seems to think permanent shelters would attract evermore of them," NGO Utopia56 founder Yann Manzi told DW.

"But this doesn't bring down the number of people coming to France. It only means they have to hide and spread out further. There are now 32 camps across Paris, instead of one big one. That makes our work a lot more difficult."

He believes the new law will make things even worse: "It's really frightening. We don't know anymore what to tell the migrants. This new law will make it easier for the government to throw them out. France is setting up a downright deportation machine to send people back home." 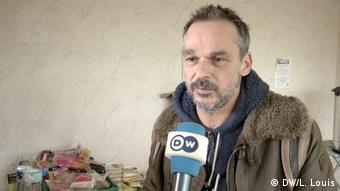 The draft law has been criticized as "unbalanced" and "too repressive" by other NGOs working with migrants, including France Terre d'Asile, which runs several government shelters across the country.

Even the apolitical magistrates' union USM is skeptical. Its members assess whether the authorities have properly followed regulations to keep migrants in detention centers. Under the new rules, the maximum time of detention will increase from 45 to 135 days.

"Studies show that if a migrant hasn't been deported 12 days after being placed in detention, it's very unlikely that he will be later on," the USM's Nathalie Leclerc-Garret explained.

"It's alarming that the government is aiming to considerably increase the maximum length of detention. There is no good reason to keep people locked up for that long. We are talking about depriving people of their freedom, after all."

Some lawmakers from Macron's very own LREM party have also criticized the bill, saying it would punish the most vulnerable.

'Being firm while being humane'

But the government says it's merely bringing French rules in line with those of other European countries. In Germany for example, migrants can in exceptional cases be held in detention centers for up to 18 months.

"Migrants in need can trust France to protect them, also under the [new] rules," insisted LREM parliamentarian Raphael Gauvain, who was a member of the commission that drafted the bill.

"We believe in being firm while at the same time being humane," he said. "The new law will streamline the asylum procedure so that migrants get a quicker decision and aren't stuck in limbo for so long. That's good for them. If their request is turned down, we will be able to deport them more easily." 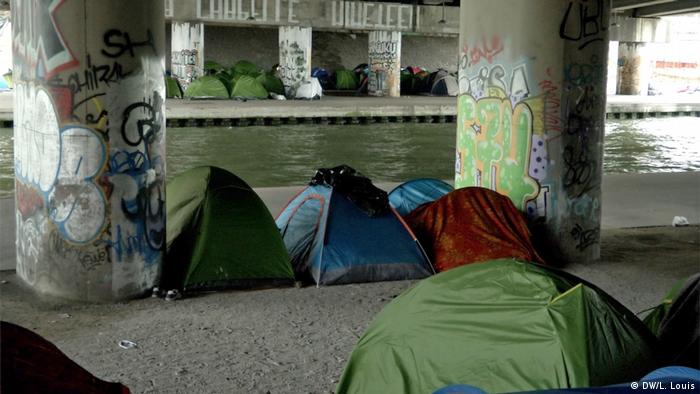 Gauvain admitted he had heard stories of police violence against migrants, but added that so far, these were just rumors.

"I haven't seen any pictures of policemen hitting migrants or taking away their tents. If that were happening, it would be a scandal and we would have to put an end to it," he said.

Ibrahim hopes for a chance

Gauvain's words are unlikely to reassure the thousands of migrants camping in France's streets in appalling conditions. More than 1,000 sleep rough in Paris each night.

Meanwhile, Ibrahim still hopes France will grant him asylum, so he can finally start over again. "I am not asking the French to give me money or anything. I only want to continue my studies and need them to protect me," he said as he walked along the canal next to his tent. He was on his way to a nearby library to work on his CV and start looking into universities and for a job.

"I am praying for France to give me a chance."

Ibrahim intends to study French literature. And one day, find a girl and start a family here in France.