Paris migrant camp to be evicted on French government orders

France's interior minister has ordered Paris forcibly evacuate migrant camps that have sprung up along its canals. The move is emblematic of France's tough new approach to migrants. 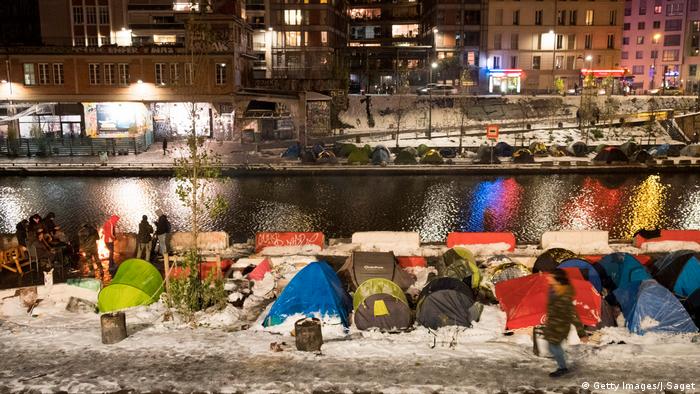 The French Interior Ministry on Monday pledged to evict about 2,300 migrants camped next to popular Parisian canals.

The contentious decision has highlighted the problem of how European nations are managing the continuing migrant influx.

For several months migrants have been settling on the banks of two canals in the northeast of Paris. Aid organizations have sounded the alarm about the living conditions there after two migrants drowned and others were injured in fights.

Minister Gerard Collomb expressed "regret" at Paris Mayor Anne Hidalgo's refusal to evict the group. He said humanitarian problems in the camps had become unbearable for Parisians and instructed authorities to quickly work out an evacuation plan.

Collomb clashed with Mayor Hidalgo over where to take the migrants. Hidalgo and aid groups want them placed in shelters rather than being evacuated in a police operation and dispersed or summarily deported. Migrant arrivals haven't slowed despite police already evicting about 28,000 migrants from other Paris camps in the past three years.

French President Emmanuel Macron has been criticized for policies of stopping migration at its source and using a police approach at home. Collomb's refusal to shelter the Paris migrants exemplifies the approach.

Collomb called on Parisian authorities to ensure such camps stop springing up. "This situation will be repeated indefinitely if measures are not taken by local authorities to prevent the camps from reconstituting themselves."

The migrants are mainly Sudanese, Eritrean and Afghan, many of whom endured difficult stays in Libya, dangerous boat trips across the Mediterranean and journeys on foot through the Alps.

Illegal African migration to Germany: What can and should be done