President Abbas has called on Arabs to visit Jerusalem, saying Trump's decision to recognize the holy city as the Israeli capital was "sinful." The comments come ahead of a visit to the region by US Vice President Pence. 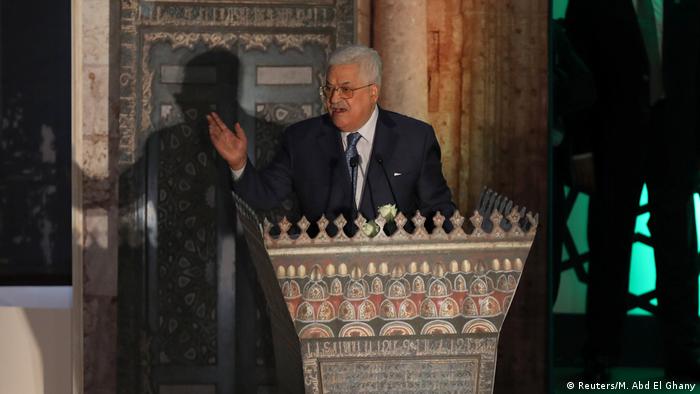 Speaking at a conference on Jerusalem in Egypt, Palestinian President Mahmoud slammed the US president for taking Israel's side over the contested city of Jerusalem.

Trump's recognize Jerusalem as Israel's capital was "sinful" and "ill-fated."

"Jerusalem will be a gate for peace only if it is Palestine's capital, and it will be a gate of war, fear and the absence of security and stability, God forbid, if it is not," Abbas said.

The Trump administration's reversal of the long-time standing US policy had disqualified itself from continuing as a participant in the long-stalled Israel-Palestine peace negotiations, Abbas said.

Abbas, who has long been opposed to violence in the region, said that Palestinians "will continue to peacefully pursue our demands until we win back our rights."

"It's the gate for peace and war and President Trump must choose between the two," he added.

Abbas also called on Arabs to visit Jerusalem in a show of solidarity in the face of Trump's decision. "We beg you not to leave us alone," Abbas said. "Do not disappoint us."

US embassy to move to Jerusalem in 2017

Despite worldwide protests at the time of Trump's decision, plans have moved forward to relocate the US Embassy. Israeli Prime Minister Benjamin Netanyahu on Wednesday said he was certain the move to Jerusalem would take place this year.

Israel seized control of the eastern part of Jerusalem in the 1967 Middle East war and sees the whole of Jerusalem as its indivisible capital. The Palestinians view the east as the capital of a future state that would also include the occupied West Bank and the Gaza Strip.

Israel has also attempted to tighten its grip on Jerusalem since Trump's declaration.

On January 2, Israel passed an amendment that raised the number of votes required to approve proposals to hand over any section of the city to "a foreign party," a decision that could hamper the division of the city as part of a peace agreement.

Abbas' comments came as Palestine's UN agency (UNRWA) on Wednesday said it was facing its "most dramatic financial crisis in UNRWA's history," following a US decision to withhold tens of millions of dollars in funding.

The US State Department said $60 million of what had been a planned $125-million package would go through to keep the Palestinian agency running, but the rest would be frozen for now.

UNRWA said the $60 million would keep schools and hospitals open for the time being, but noted that it was dramatically less than the $350 million Washington paid during 2017.

US State Department officials insisted the decision was not an attempt to pressure Palestinian leaders but rather encourage other countries to help pay for and reform UNRWA.

But on January 2, Trump tweeted that the US gives hundreds of millions of dollars a year Palestine and gets "no appreciation or respect."

"With the Palestinians no longer willing to talk peace, why should we make any of these massive future payments to them?" he wrote.

The US was the largest single donor to UNRWA contributing more than 350 million dollars to the agency in 2017, Krähenbühl said, adding that the US move would stoke "further radicalization" throughout the Middle East.

UNRWA supports some 5 million Palestinians in Jordan, Syria, Lebanon and the Palestinian Territories.

US Vice President Mike Pence is due to visit the region this coming weekend. Pence is the most senior American official to visit the Middle East since Trump's Jerusalem decision in December.

He has planned to visit Egypt, Jordan and Israel but won't meet with Palestinians.

The US has vetoed a Security Council resolution on Jerusalem calling on all states to not establish embassies in the city. The measure expressed "deep regret at recent decisions concerning the status of Jerusalem." (18.12.2017)

Palestinian President Mahmoud Abbas has said Trump should be ashamed of his Middle East peace efforts. Abbas also called into the question the Oslo Accords, which stipulate Palestinians' recognition of Israel. (14.01.2018)

Israel's police chief has ordered a probe into the actions of officers at the funeral of reporter Shireen Abu Akleh in Jerusalem. Germany's top diplomat, Annalena Baerbock, said she was "deeply shocked" by the events.

Major holidays for Jerusalem's Jews, Christians and Muslims are being overshadowed by fresh tensions. Israeli police clashed with Palestinians in the Old City, leaving more than 150 people injured.