Palestinian gets three life sentences for murder of Israeli teens

An Israeli court has handed down three life sentences to a Palestinian man for plotting the kidnapping and murder of three Israeli teenagers. The killings triggered renewed tensions between Palestinians and Israel. 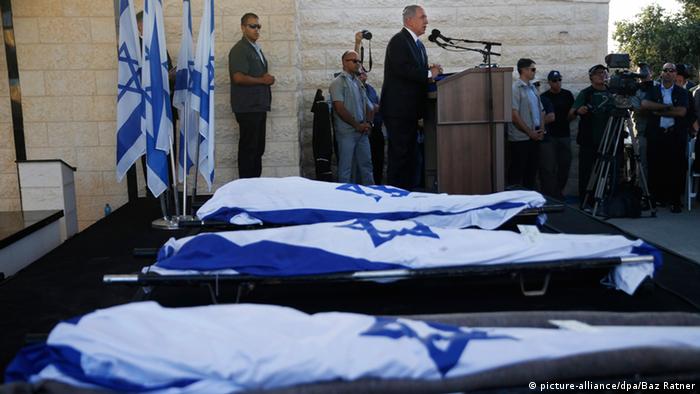 Seminary students Eyal Yifrah, 19, and Gilad Shaar and Naftali Fraenkel, both 16, were grabbed on June 12 outside of Jerusalem. Their bodies were discovered three weeks later in Hebron in the West Bank.

According to the court's judgement, Hebron resident Qawasmeh was found guilty of "participating in the intentional killing" of the three youths.

"The accused was convicted of the most serious crimes ... the cold-blooded and terrible murder of three young people who were going home to their families," court documents said.

"As a result of his actions, the accused is sentenced to three life terms. He will be removed from society and spend the rest of his life in prison."

The Israeli army says Qawasmeh planned and financed the crime, but sent two other Hamas members, Marwan Qawasmeh and Amer Abu Aisheh, to carry out the abductions. Those two suspects were shot dead by Israeli armed forces in Hebron last September.

Hamas originally denied involvement in the kidnappings and, although they praised the act, said the three perpetrators weren't acting on orders from their movement.

Israel responded to the killings with mass arrests and searches in the West Bank. By this time tensions between Israel and Hamas had well and truly been reignited, ultimately paving the way for a full-scale conflict in the Gaza Strip that left nearly 2,200 Palestianians - most of them civilians - and 70 Israelis dead.

Six Jewish suspects have been arrested following the murder of a young Palestinian. In Israel, many have reacted with horror at the deed, while others are calling for revenge over the deaths of three Israeli teens. (08.07.2014)

Israelis are mourning three teenagers found dead on Monday. The government blames the killings on the Palestinian political faction Hamas. (01.07.2014)