Israelis are mourning three teenagers found dead on Monday. The government blames the killings on the Palestinian political faction Hamas. 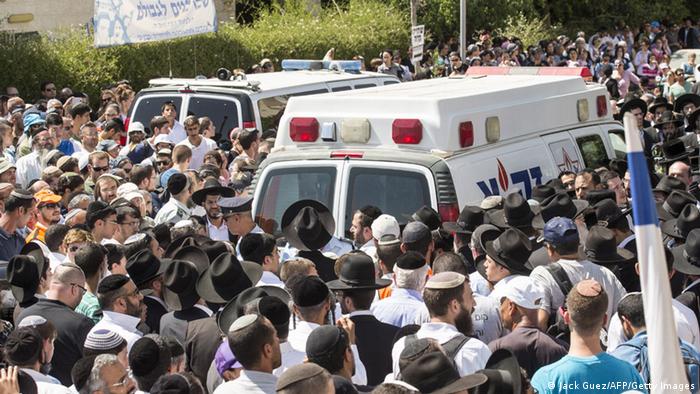 As Israel mourned the teenagers killed on June 12 while hitchhiking from Jewish seminaries near the West Bank city of Hebron , the air force targeted dozens of locations in the Gaza Strip. Israel has accused the Palestinian political faction Hamas of carrying out the murders.

Prime Minister Benjamin Netanyahu has warned that "Hamas will pay."

Hundreds of people participated in separate services Tuesday in the hometowns of Eyal Yifrah, 19, Gilad Shaar, 16, and Naftali Fraenkel, a 16-year-old with dual Israeli-American citizenship. Israel has interred the teenagers in the central town of Modiin.

For the two weeks following the teens' disappearance, Israel arrested 419 Palestinians, 276 of them members of Hamas, the party democratically elected to lead the Gaza Strip. During their hunt, troops also killed at least five Palestinians, including a teenage boy. Hamas denies involvement.

"We reject all Israeli allegations and threats against us," Hamas spokesman Sami Abu Zuhri said. "No Palestinian group, Hamas or any other group, has claimed responsibility for the action," he added, insisting that "the Israeli version of events can't be trusted."

In the West Bank Tuesday, Israeli troops killed a Palestinian man, who, officials said, threw a grenade at them. His family said he had been carrying eggs for a predawn meal before the daylight fast for the Ramadan holiday.

On Monday, troops detonated the family homes of the alleged murderers in Hebron. Soldiers also arrested one suspect's father and brothers.

"Hamas's leaders and members should know that the blood of whoever dares strike at the citizens of Israel is forfeit," Defense Minister Moshe Yaalon said Tuesday, speaking at a funeral for one of the teens. "They should know that we will pursue them wherever they are and hit them hard."

Netanyahu has seized on the teenagers' deaths to demand that Palestinian President Mahmoud Abbas annul a reconciliation deal he reached with Hamas, the longtime political rival to his own Fatah party, in April that led to the announcement of a unity government on June 2. The Israeli daily Haaretz has reported that Defense Minister Moshe Yaalon proposed building a new settlement in the West Bank in memory of the teens. Economy Minister Naftali Bennett has proposed a large-scale military operation in Gaza and to begin using the death penalty against Palestinians convicted of violent crimes.