Mourning in Israel, fear in Palestine | World | Breaking news and perspectives from around the globe | DW | 01.07.2014

Mourning in Israel, fear in Palestine

The bodies of the three young Israeli settlers who went missing nearly three weeks ago have been found close to the West Bank city of Hebron. While Israeli settlers mourn, Palestinians worry about retaliation. 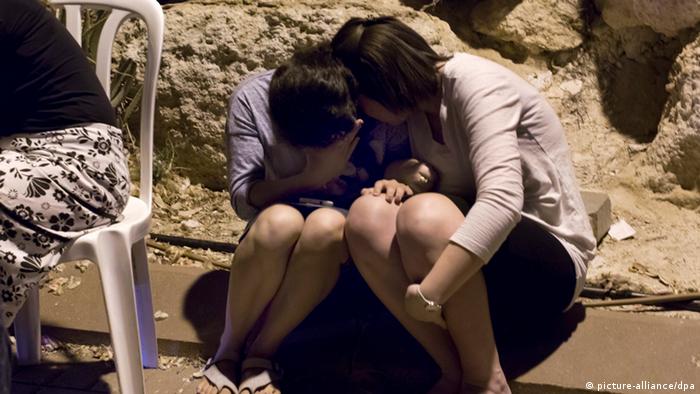 The Israeli Defence Force launched Operation Brother's Keeper in search of the boys. It took place in a radius around Hebron encompassing the Karmei Tzur settlement and the Palestinian town of Halhul.

More than 2,100 Palestinian-owned buildings in the West Bank were searched and 566 Palestinians were arrested, often without charge, in the sweep.

On Monday (30.06.2014), Israeli soldiers and civilian volunteers initially found two of the bodies in a field, in a shallow hole in the ground covered by rocks. The third body was later also found there. An army spokesperson said they were not immediately able to be identified, but signs pointed to the bodies being those of the missing youth.

The Israeli Security Cabinet called an emergency meeting at 9:30 on Monday night. No decisions were made, but the Cabinet will reconvene today. 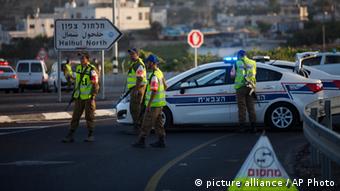 Israeli police secure the village of Halhul, where the bodies were found.

Israel continues to blame Hamas for the murders, but has not produced any evidence Hamas is behind them.

Palestinians in the West Bank feared a broader military crackdown would be launched by Israel after the youths were found dead. They prepared for the worst in Hebron, the closest city to where the bodies were found, ensuring their cars were out of sight and they stayed indoors fearing attacks from settlers.

On Monday night the Israel Defense Forces, the nation's military, set fire to the homes of Marwan Qawasmeh and Amer Abu Aisha, two Hebron residents who Israel has named as suspects. Before this act, the use of punitive demolitions had been discontinued in 2005.

An eight-year-old girl near Bethlehem was injured when she was hit by a car driven by a settler.

In the settlement Nof Ayalon, the friends, family and neighbors of 17-year-old Naftali Frankel gathered in a community hall opposite a basketball court where he used to play.

Men and women were mourning separately - women stood in a circle with their arms around each other singing and praying.

The scene was calm - a classmate of Frankel who would not be named told Deutsche Welle while sitting on a white plastic chair near the community hall entrance that he'd heard the news through his networks on the cell phone messenger WhatsApp.

In the small settlement of 400 families news travels fast. Everybody knows each other.

"I genuinely had hope he would be alive, but I deep down knew that he had been murdered," Frankel's classmate said.

He said despite the deaths, he wasn't scared about hitchhiking in the future.

"There is a little fear, but it's normal to hitchhike," he said. "It's not dangerous, it's a way of life. We don't have a direct line of bus here," he said.

Just down the road from the gathering was a small group of youths reflecting and remembering the times they had with Frankel.

17 year-old Itay Ya'ari knew him well and studied in the same class as him in school.

"He was a good friend and a good student - he was great at basketball and football too," he said.

Another of those in the group, a 20-year-old who didn't want to be named told DW he also knew Frankel well. 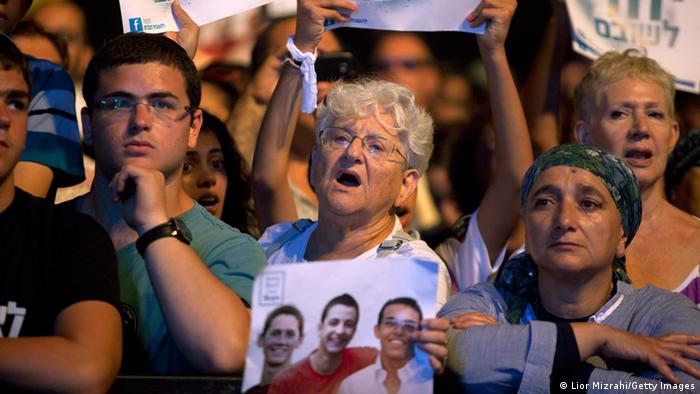 "Our settlement is very communal; most people know each other well," he said. "The past couple of weeks have been tough for the family and the community as a whole," he said.

"Everyone's been trying to help the family - that's what it's like here, every time someone is in need of help, we reach out."

Nearby in El Ad, an Orthodox Jewish settlement, settler youths had gathered to protest the news of the discovery of the three teenagers' bodies.

Police barriers were in place at the entrance to the settlement and youths held banners with slogans reading "We will not forgive, we will not forget."

Some of the settler youths scaled lamp posts across the main motorway bordering El Ad, trying to secure a large banner in an effort to stop traffic at two in the morning and share their message.

A neighbor of Eyal Yifrach, who identified himself as Noah, said Prime Minister Benjamin Netanyahu had visited the settlement just before midnight.

"Everybody is angry," Noah said, but denied any possibility of retaliation attacks or demonstrations against Palestinians. "Our family has helped the Yifrachs a lot - everybody has been united."

There's been an outpouring of support from all corners of the globe since the news of the discovery of the bodies.

US President Barack Obama was one of the first to condemn the "senseless act of terror against innocent youth" - but he also urged all sides not to do anything which could "destabilize the situation."

Australia's ambassador to Israel, Dave Sharma took to Twitter to say he was shocked, saddened and outraged.

Plenty of support also came from the United Kingdom, with Prime Minister David Cameron labeling the deaths an "appalling, inexcusable act of terror." 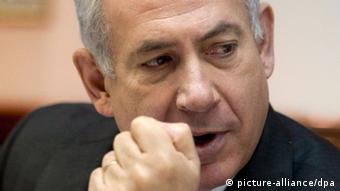 The Vatican has also condemned the killings as a "hideous and unacceptable crime."

Netanyahu continues to blame Hamas for the death of the three Israeli settler youth.

"Hamas is responsible and Hamas will pay," Netanyahu said in a statement after the discovery of the bodies. "[The youths] were kidnapped and murdered in cold blood by wild beasts."

Palestinian President Mahmoud Abbas simultaneously called an emergency meeting to discuss the killings and later contacted the US and the EU to ask for support in further crackdowns on Palestinians in the West Bank.

Hamas has maintained their denial of any involvement in the deaths.

The boys were also remembered further north in Tel Aviv, as hundreds of people gathered to light candles in an emotional vigil.

For two-and-a-half weeks Israel has fretted over the fate of three missing teenagers. Now, it has become clear: they were killed. The violence in the region could escalate further. (01.07.2014)

Israel has launched a series of air strikes across the Gaza Strip. Tensions have escalated since three Israeli teenagers were found dead. The Israeli government accuses Hamas, which controls Gaza, of their murder. (01.07.2014)