Israel polarized over response to Arab, Jewish teen murders | World| Breaking news and perspectives from around the globe | DW | 08.07.2014

Six Jewish suspects have been arrested following the murder of a young Palestinian. In Israel, many have reacted with horror at the deed, while others are calling for revenge over the deaths of three Israeli teens. 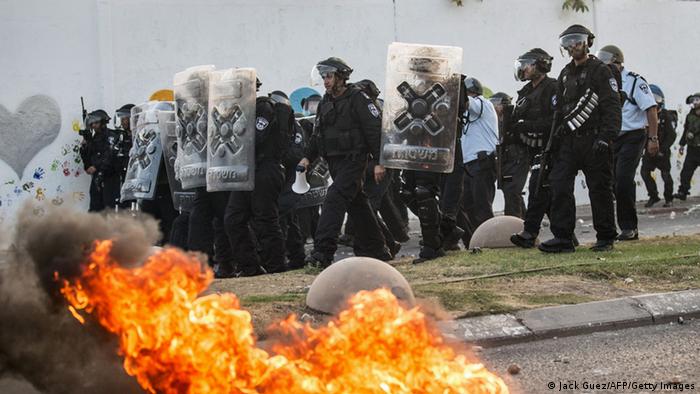 "Shame - that was the feeling on Sunday evening, when the identity of the murderers of the boy Mohammed Abu Khdeir became clear," a columnist in the Israeli daily Yedioth Ahronoth wrote on Monday. "It's a huge shame that such a thing happened among us, where we were so sure that this could not happen among us, and that only Arabs could be so cruel."

The news of the arrest of six young Israelis shocked and horrified the country. Details of the investigation are still subject to censorship. Media reports say three of them have already confessed to the cruel murder of the 16-year-old Palestinian Mohammed Abu Khdeir. Initial autopsy reports suggest the young Palestinian was burned alive by his murderers, the Palestinian attorney general announced over the weekend.

At the political level, all parties condemned the murder. In Israel, the killing is being seen as an act of revenge for the murder of three Israeli teenagers. Eyal Yifrah, Gilad Shaar and Naftali Frenkel were kidnapped near a settlement three weeks ago and were found murdered in the West Bank last Monday (30.06.2014). The Israeli government holds Hamas responsible - which has not claimed responsibility. Since then, the mood in the country has been more than heated. 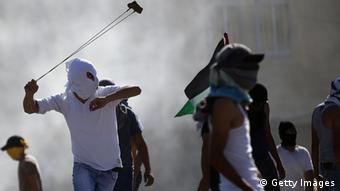 The murder of the young Palestinians and the arrest of the alleged Israeli perpetrators have put the self-image of many Israelis in question. Incitement and racism can also be found on the Israeli side, a commentator for the Israeli daily newspaper Ha'aretz warned. Many must now reevaluate the concept of moral superiority, and the idea that only "the Palestinians are the only ones who glorify the killing of children and distribute sweets after suicide bombings."

Demand for the death penalty

During the weekend dozens of right-wing protesters again gathered outside the residence of Prime Minister Benjamin Netanyahu. Israeli security forces looked on, while some demonstrators dressed as Hamas fighters posed in front of the TV cameras, holding pictures of the three murdered Israeli teenager. "We are at a very tragic moment in Israeli history and Israel even as a state now," said Moshe, who did not want to reveal his full name. "Three Jewish kids got kidnapped and our government is doing absolutely nothing for this, absolutely nothing. We are here because all the news is about the kid now in Shuafat. These Arabs have no limits; they kill our children and expect us to stand with our hands closed."

He is a member of an ultra-nationalist group that rejects any co-existence with the Arabs. "Basically we are here because the government doesn't do enough against the terror. We demand that the government start to make the death penalty for all the terrorists. Because what is going on here is just a joke," said Ron Kaufman, pivoting a large Israeli flag. "You can say enough is enough. In the Gaza Strip now, there are 30 rockets each day. I want to see one rocket hit America from Canada and Canada is gone." The protesters say Israel must use force against Gaza and destroy Hamas.

Quite different voices could be heard just a few streets away. On Zion Square in the city center, around 40 people demonstrated against the violence and escalation. 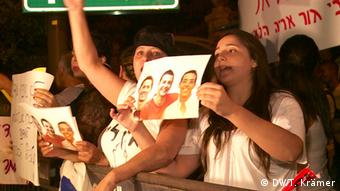 "We felt that the increasing violence in Jerusalem is too much, someone needs to stand exactly here in the center of Jerusalem and raise the voice of the regular people that are not for violence and are not for hatred and just want to live here in peace and want to have cooperation between the people," said Oron Elior of the organization "Combatants for Peace." For many years, the group has campaigned for coexistence between Palestinians and Israelis.

"I think being here doesn't allow you to be passive. If the passive people will keep on being passive, nothing will change," he said. In the vacuum left by the aborted peace talks, the situation may escalate more easily, many believe here.

"I am myself not very shocked about this open violence," Palestinian Amir Khalash said. "Because the main violence is still the violence by the police and by the army. If the boy was killed by the Tag Mechir people, it is still less shocking then all the other Palestinians that were killed in the last few weeks because of official revenge by the army."

Only a few hundred meters from Zion Square, Matan Israeli followed the news. The young artist lives in West Jerusalem and usually works with Palestinian artists in joint art projects. He says he's building bridges - between the majority Arab East Jerusalem and the Jewish West Jerusalem.

This is not easy, even in less tense times. After the incidents of the last few weeks, he said he barely recognized his country.

"I am a bit afraid personally. It was a few scary days to walk in the West and to see all the people marching there and the hate and all the escalation," he said. Plans to make a joint art project for Palestinians and Israelis in his district this summer have been put on ice for the first time.