Three Israelis arrested for killing a teenager have confessed. The boy's cousin, a US citizen, was arrested at a protest over the murder and later returned by police to his parents, having been badly beaten. 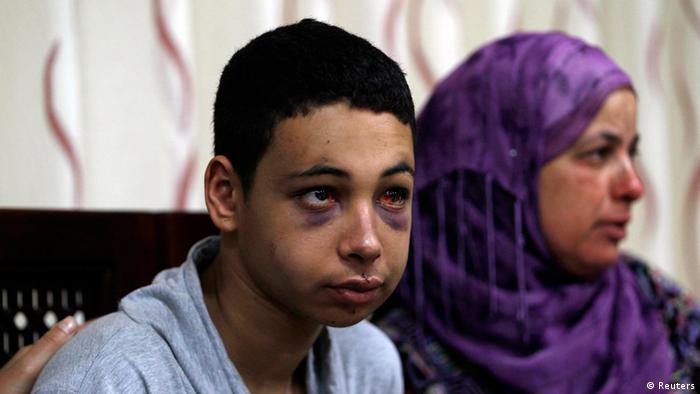 On Monday, three of the six men arrested for killing Mohammed Abu Khdeir, a 16-year-old Palestinian, admitted to the murder. The killing is thought to be a revenge attack by extremists, after three Israeli youths who had gone missing on June 12 were found dead on June 30.

"The three suspects re-enacted the crime, following the route of the car in which the Palestinian teen was kidnapped, which leads to the Jerusalem Forest," the Israeli newspaper Haaretz reported.

"I would like to express my outrage and that of the citizens of Israel over the reprehensible murder of your son," Netanyahu said, according to a statement. "We acted immediately to apprehend the murderers," he added. "We will bring them to trial and they will be dealt with to the fullest extent of the law. We denounce all brutal behavior, the murder of your son is abhorrent and cannot be countenanced by any human being."

Hussein Abu Khdeir, the boy's father, was reported by the AP news agency as saying he didn't know for certain if he had spoken with Netanyahu.

Tariq Abu Khdeir, a 15-year-old Palestinian-American cousin of Mohammed's, was arrested at protests over the boy's murder. On Monday, US State Department spokeswoman Jen Psaki said diplomats were "profoundly troubled" by reports that Israeli officials had beaten the boy (pictured) in custody.

Hamas announced that at least eight members had been killed overnight in airstrikes. Israeli officials claim those killed had launched rocket attacks from Gaza.

Netanyahu has resisted calls from Cabinet hard-liners for a more major operation in the Gaza Strip. On Monday, Foreign Minister Avigdor Lieberman, head of the right-wing nationalist Yisrael Beitenu party, said he would end his party's 20-month alliance with Netanyahu's Likud over its handling of the situation in Gaza.

Lieberman's faction will remain in the governing coalition but his party's divorce from the Likud could give it greater freedom of action in parliament.