The Pakistani prime minister has also sought a ban on "Islamophobic content" on Facebook. Imran Khan's criticism of Emmanuel Macron comes at a time when he is under scrutiny for rising religious intolerance at home. 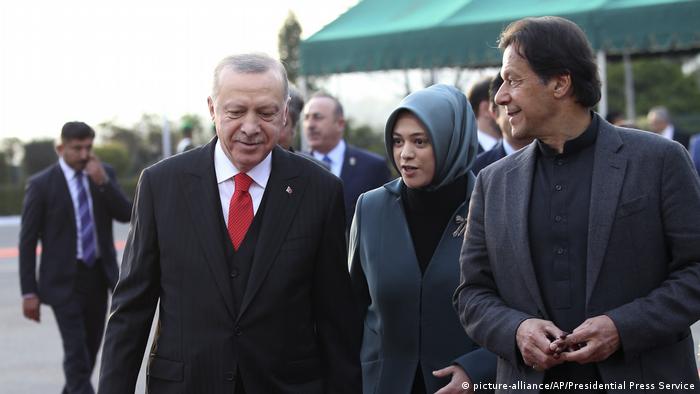 "This is a time when President Macron could have put a healing touch and denied space to extremists rather than creating further polarization and marginalization that inevitably leads to radicalization," Khan wrote on Twitter.

"Sadly, President Macron has chosen to deliberately provoke Muslims, including his own citizens, and encouraged the display of blasphemous cartoons targeting Islam and the Holy Prophet [Muhammad]," he added.

Macron didn't directly respond to Khan, but issued a tweet later in the day saying that the French government respects all differences in "a spirit of peace."

"We do not accept hate speech and defend reasonable debate. We will always be on the side of human dignity and universal values," said Macron.

Khan's scathing criticism of Macron follows days after the French president dedicated a high-level ceremony to Samuel Paty, a teacher who was beheaded for showing students caricatures of the Prophet Muhammad.

Macron said the teacher "was killed as Islamists want our future," as he pledged to fight "Islamist separatism" that threatened to take hold of some Muslim communities around France.

Turkish President Erdogan blasted France and Europe on Saturday over what he saw as "rising Islamophobia."

"What problem does this person called Macron have with Muslims and Islam? Macron needs treatment on a mental level," Erdogan said in a speech at a provincial congress of his Justice and Development (AK) Party in the central Turkish city of Kayseri.

Paris condemned Erdogan's remarks as "unacceptable," adding that it was recalling its envoy to Ankara to discuss the matter.

In a letter to the company's CEO Mark Zuckerberg, the Pakistani premier said that growing Islamophobia was "encouraging hate, extremism and violence across the world, and especially through the use of social media platforms, including Facebook."

In the letter, Khan called out "anti-Muslim laws" in India and France's decision to allow the "publication of blasphemous cartoons targeting Islam and our Holy Prophet."

"Imran Khan is rightly concerned about Muslims living in France. But what about the Uighurs in China? He should also show sympathy to them," Adeel Khan, a London-based Pakistani researcher and anthropologist, told DW, referring to Beijing's alleged persecution of the Muslim minority group in Xinjiang.

"Also, Khan's timing was terrible. Last month, a Pakistani migrant attacked two people outside the former Paris headquarters of satirical magazine Charlie Hebdo. It was a foreign policy disaster for his government," he added.

The South Asian country's independent Human Rights Commission (HRCP) said most of these cases were filed against Shiite Muslims in relation to speeches made at religious processions.

In September, a Lahore court sentenced a Christian man to death on charges of blasphemy. In July, a US citizen on trial for blasphemy was shot dead in a crowded courtroom in the northwestern city of Peshawar.