A man accused of committing blasphemy under a controversial Pakistani law has been killed while standing trial. It is the latest in a series of such extrajudicial killings in the country. 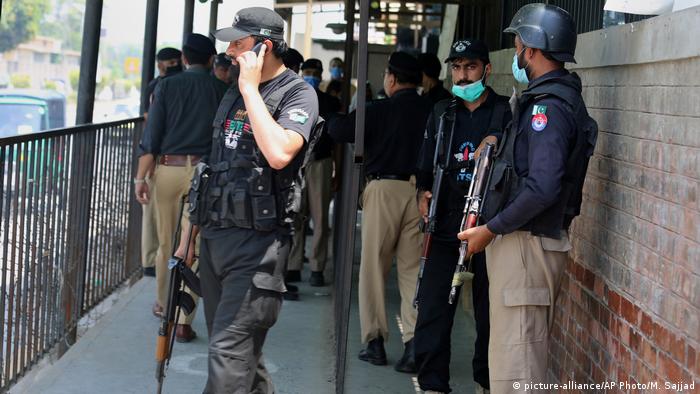 A Pakistani man was arrested on Wednesday after he entered a courtroom in the northwestern city of Peshawar and shot and killed another man who was standing trial for blasphemy.

The man on trial was facing charges of having insulted the Muslim Prophet Muhammad, an offense that carries the maximum sentence of death under the country's blasphemy laws.

The suspect told police that he had been ordered to carry out the killing by Muhammad because the accused had belonged to the Ahmadiyya faith, a minority that Pakistan declared non-Muslim in 1974 for regarding its founder, Ghulam Ahmad, as a prophet. In orthodox Islam, there can be no prophets after Muhammad.

The group, which numbers some 4 million members, has faced persecution for decades. A spokesman for the group later said that while the man was "born" an Ahmadi, he had since "left the community."

One police officer, Azmat Khan, told the Associated Press that the accused had himself claimed to be Islam's prophet and had been arrested on blasphemy charges two years ago.

Human rights groups have said Pakistan's blasphemy laws, introduced by former military ruler Ziaul Haq in the 1980s, are often used to settle personal scores, with a mere accusation often sufficing to cause riots or killings.

Although Pakistani authorities have yet to put someone to death for the offense, crowds and individuals often take the law into their own hands. More than 50 people have been victims of extrajudicial killings before their court trials had even finished.

In one prominent case, a governor in Punjab province was murdered by his own guard after he defended a Christian woman, Asia Bibi, who faced blasphemy charges. Bibi herself was acquitted after spending eight-year on death row and emigrated to Canada last year after death threats from Islamic extremists.

Asia Bibi, a Pakistani-Christian woman, was sentenced to death by a Pakistani court on blasphemy charges in 2010. Who is Bibi, and why has her case attracted international attention?