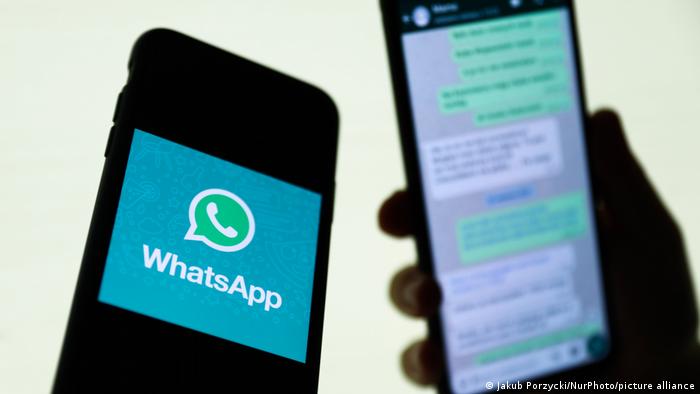 Blasphemy is a sensitive topic in the Islamic Republic of Pakistan, where around 97% of the 180 million inhabitants are Muslim.

Aneeqa Ateeq, a 26-year-old Muslim woman, was arrested in May 2020 and charged with posting "blasphemous material" as her WhatsApp status.

A court in the city of Rawalpindi found Ateeq guilty this week, gave her a 20-year jail sentence and ordered her to be "hanged by her neck till she is dead."

Ateeq, who has stated that she is a practicing Muslim, denied the charges.

'Revenge' for refusing 'to be friendly'?

During the trial, Ateeq told the court that she believed the complainant, Hasnat Farooq, deliberately pulled her into a religious discussion so he could implicate her and take "revenge" after she refused "to be friendly" with him.

Farooq contended that the accused shared the allegedly blasphemous material as a WhatsApp status and refused to delete it when he confronted her on the messaging platform.

She "deliberately and intentionally defiles sacred righteous personalities and insulted the religious beliefs of Muslims," according to the police charge sheet.

EU-Pakistan row: 'GSP+ status is not a one-way street'

Saiful Malook, a senior lawyer, said no proper legal aid was provided to Ateeq during the trial.

"The defense lawyer failed to defend her during the entire trial period and even admitted her crime in the court proceedings, which led to Ateeq's death sentence," said Malook, who represented Asia Bibi, a Christian woman who spent years on death row following blasphemy allegations before she was acquitted by the nation's top court in 2019.

Blasphemy is a sensitive topic in the Islamic Republic of Pakistan, where about 97% of the 180 million inhabitants are Muslim.

In 1947, Pakistan inherited the blasphemy laws from its British colonial rulers, who had made it a criminal offense to commit "deliberate and malicious acts intended to outrage religious feelings of any class by insulting its religious belief."

In later decades, the Islamic military dictator General Zia-ul-Haq introduced extensions of the laws between 1977 and 1988, including life imprisonment for people found guilty of defiling or desecrating the Holy Quran. Later, the death penalty was declared mandatory for anyone blaspheming against the Prophet Muhammad.

According to the US Commission on International Religious Freedom, about 80 people are known to be jailed in Pakistan on blasphemy charges — half of whom face life in prison or the death penalty.

People have been lynched and even killed following allegations of insulting Islam or the Prophet Muhammad.

In December, a Sri Lankan working in a factory in the eastern business hub of Sialkot was killed by an enraged mob over blasphemy suspicions, an incident that grabbed global headlines.

Activists and rights groups believe that Pakistan's blasphemy laws are draconian and are often misused.

The laws are often employed in cases that have little to do with blasphemy and are used to settle petty disputes and personal vendettas. Christians, Hindus and Ahmadis — a minority Islamic sect — are often victimized as a result, they point out.

"The current version of the blasphemy law is indeed draconian. It is often misused, abused and exploited by individuals for their own ulterior motives and vested interests," Tahira Abdullah, a human rights activist, told DW.

Rights organizations have long called on the government to amend or repeal the contentious laws.

"The law should be amended, and, at the very minimum, there is a need to amend the procedural aspects of the Pakistan Penal Code Sections," Abdullah said.

"No law, including the blasphemy law, is untouchable," she added.

Conservative and right-wing groups, however, have vociferously opposed allowing even a slight amendment to the blasphemy laws.

Ayesha Ijaz Khan, a lawyer and columnist, told DW that it was impossible to have a rational conversation on the issue given the prevailing climate of fear.

"It is impossible to speak freely about matters tied to religion in Pakistan, although calls for reform have cited examples from other Muslim-majority countries like Bangladesh, Indonesia and Malaysia, where prison sentences for blasphemy vary from 3 to 5 years and do not carry the death penalty," she said.

Abdullah said Pakistani politicians appeared to lack the courage to tackle the problem. "They are too afraid of the noisy street power of the mullahs and religious-political parties like the Tehreek-e-Labbaik Pakistan (TLP)," she underlined.

TLP is a largely Barelvi (a sect in Islam) party, founded in 2015 by Khadim Hussain Rizvi, a firebrand cleric who died in November 2020. The core ideology of this party revolves around the "finality of Prophet Muhammad" and the protection of Pakistan's blasphemy laws.

"Groups like TLP have been used over the years for short-term political gain while overlooking the damage they do to the fabric of society and rule of law," Khan said. She noted that the group had protested against the government of Prime Minister Nawaz Sharif in 2017 after the release of a proposed new version of an oath to be taken by lawmakers that omitted mention of the Prophet Muhammad.

"The state capitulated to their demands, emboldening them. Later, this allowed them to demand the expulsion of the French ambassador over offensive cartoons of Prophet Muhammad published in France in 2020," she noted.

Multiple reasons for the rise in blasphemy cases

At the time of the 2017 protests, Prime Minister Imran Khan — who was then in the opposition — had sided with the protesters instead of with the then government, the lawyer said. "This came back to haunt him when they created mayhem again during his rule."

Abdullah said the TLP's cynical manipulation of the blasphemy law to gain political objectives was not the only reason for the increasing number of blasphemy-linked court cases and vigilante killings.

"Other factors include the misuse of religion for personal ulterior motives, the ignorance of the masses regarding the Quranic injunctions on the subject, the fear factor among witnesses, judges and lawyers, and the absence of political will to focus on the problems in the law itself," she said.

Another big reason, Abdullah said, is "the ease with which vigilante mobs are permitted to carry out extrajudicial killings of blasphemy-accused individuals and then get away with impunity."