Coronavirus makes life more difficult for Pakistan′s transgender community | Asia| An in-depth look at news from across the continent | DW | 04.09.2020

The transgender community in Pakistan faces cultural and legal discrimination on a regular basis, but things have become even tougher for them during the coronavirus pandemic. Mavra Bari reports from Islamabad. 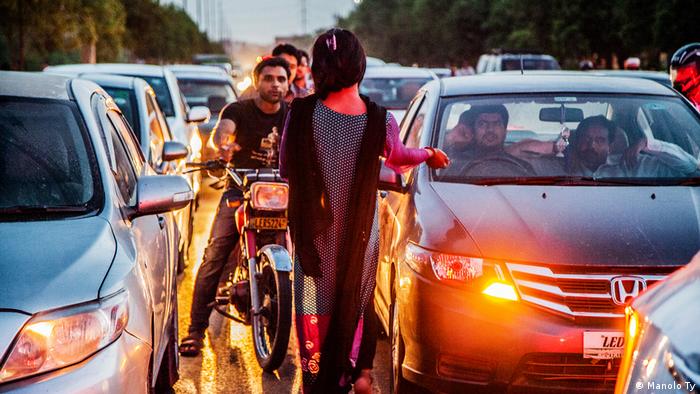 "Things were really difficult for me during the coronavirus lockdown, and they haven't improved since the government eased restrictions. People still refuse to interact with us," Shaista, a transgender person in Islamabad, told DW.

Transgender people in Pakistan mostly work in the informal sector of the economy. Many of them beg on streets or perform sex work to survive.

Cultural and institutional discrimination against transgender people in Pakistan have resulted in a lack of education and employment opportunities for them.

The outbreak of the COVID-19 pandemic in March has made their lives even more difficult. Social distancing measures, and the stigma that transgender people are "unclean," have deprived them of the limited means of making a living they had before the start of the pandemic.

As of September 4, Pakistan has recorded over 297,000 coronavirus cases and 6,335 related deaths. The number of positive cases has drastically decreased in the past month. Despite these positive trends, the situation for transgender people hasn't improved.

According to a 2019 Supreme Court census, the estimated population of transgender people in Pakistan is around 300,000, although the actual number could be higher. Pakistan's population stands at roughly 212 million people.

Transgender people face various challenges in Pakistan, and they are often harassed and sidelined by society.

In 2016, Alisha, a 23-year-old transgender activist, was shot seven times and rushed to the Lady Reading Hospital in Peshawar, where she died due to delayed treatment, reportedly because staff couldn't decide whether to place her in a male or female ward. Her friends blamed it on discrimination.

While constitutional and legal inroads have slowly been made into securing basic rights for transgender people, implementation has sometimes been slow.

The community was only allowed to vote in federal elections in 2011. In 2018, they were recognized as a separate category in the national census.

Although constitutionally they have been granted economic rights, such as the right to inheritance, there is little evidence of those rights in practice. Even religious groups abstain from taking part in the last ritual rights of transgender people as they are thought to be against Islam.

Many transgender people in Pakistan are disowned by their families and are forced to fend for themselves. "More than 90% of transgender people face the same problem, that their parents have disowned them. They live with their gurus (mentors)," Asif Shahzad, founder of the Gender Guardian School in Lahore city, told DW.

This guru-chela relationship, similar to a master-disciple relationship, is a situation where transgender people are sheltered and supported by their mentors who take care of them and stand by them in times of crises.

"Social discrimination and stigma became stronger during the pandemic. I was told to evacuate my home because I tested positive for coronavirus," Nayyab Ali, a transgender activist, told DW.

Ali had to go through this ordeal despite the fact that she is one of the few transgender individuals in Pakistan who are formally employed.

Recently, Ali conducted a preliminary research for the UNDP on the impact of COVID-19 on the transgender community in Islamabad and Rawalpindi.

The research revealed that transgender people are at higher risk of being infected by the virus as many of them live in groups. Almost half the survey respondents said they were unable to maintain social distancing during the pandemic.

As many transgender people rely on work that requires public interaction, it is not always possible for them to follow safety procedures, Ali notes.

According to Ali's research, almost half of the transgender population in Pakistan earn their living by begging, sex work (9%) and dancing at weddings (8%), while the rest are associated with other informal professions.

The study findings noted that 59% of respondents ranked public health care as their first priority as almost a quarter of them suffers from a disability or a protracted illness, making them vulnerable to contracting coronavirus. Ali said the pandemic has further reduced their access to health facilities.

Cases of increased physical attacks on transgender people during the pandemic have also been reported by local media. Friction among the community is also on the rise in the past few months as a result of dwindling resources.

On August 10, Julie, a transgender activist, was arrested for physically attacking other transpersons. Police is reportedly holding her in the men's section of a jail in Rawalpindi.

Talking to DW, Lubna, who was one of the transgenders allegedly attacked by Julie, said the assault was an attempt to scare her community to stop questioning an NGO funding scam.

"These people use us to get money from NGOs but the money never reaches us. There has to be some accountability," Lubna said.

Read more: Pakistan's first transgender anchor: 'I struggled a lot to be accepted'