Tens of thousands rallied in Karachi, calling on Pakistan to sever diplomatic ties and boycott French products. Demonstrators trampled on images of the French president and burned French flags. 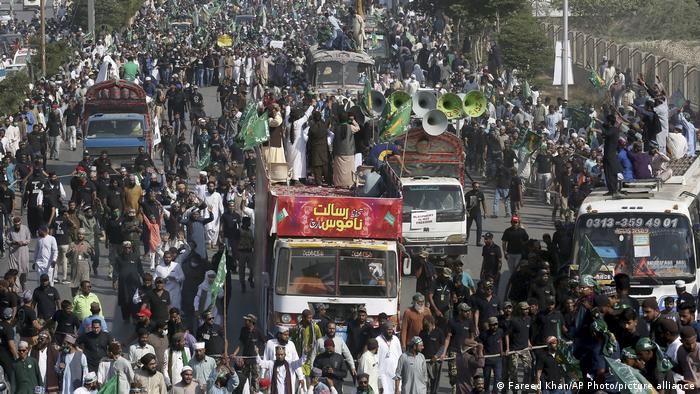 Protesters rallied in the Pakistani port city of Karachi on Saturday against France's position on publishing cartoons depicting the Prophet Muhammad.

Activists from the far-right Tehreek-e-Labbaik Pakistan (TLP) party and Karachi residents took to the streets, calling for the Pakistani government to cut diplomatic and trade ties with France. Previously, the French government defended the right to free speech, including publishing the controversial images.

Demonstrators trampled on images of French President Emmanuel Macron, burned French flags and held up banners with slogans expressing their willingness to avenge what they consider to be blasphemy.

"We demand the government take steps to boycott France and expel its ambassador from the country," Zubair Kasuri, a spokesperson for the TLP, told dpa news agency.

Following the Islamist killing of a civics teacher near Paris earlier last month, Macron defended the right of French magazine Charlie Hebdo to publish caricatures of the prophet. Samuel Paty, 47, was killed last monthafter showing the cartoon images to his class, during a lesson on freedom of speech.

In an interview with Qatar-based Arabic TV station al Jazeera last Saturday, Macron said he understood the shock Muslims felt at the caricatures but defended freedom of expression and France's secular values.

Prime Minister Imran Khan has said that Europeans have shown a lack of understanding for the fact that Islamic tradition explicitly forbids such images. Demonstrators also took to the streets last week in Pakistan, Lebanon, Turkey and India to protest the French government and Macron's controversial comments.

Pakistan, a primarily Muslim nation with a population of 220 million, experienced deadly protests when a movie deemed insulting to the prophet was uploaded to YouTube in 2012.

This weekend's protests came as French Prime Minister Jean Castex called "radical Islam" the "enemy" of the European country at a memorial service, mourning the killings of three people by a knife attacker in Nice.

He decried radical Islamism as a "political ideology that disfigures the Muslim religion... to impose its dominance by ignorance and hate." He warned that radical Islamism benefited "from support overseas but, alas, also counts French citizens in its ranks."