Tens of thousands of Muslims have marched in several cities in anger at Paris' decision to protect the right to caricature the Prophet Muhammad. France is still reeling from two deadly knife attacks, blamed on Islamists. 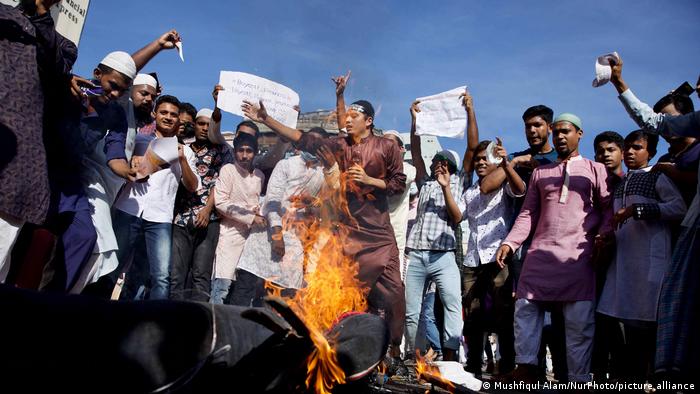 From Pakistan to Lebanon, tens of thousands of protesters joined anti-France protests on Friday, angered by a row over freedom of expression involving cartoons of the Prophet Muhammad.

In Pakistan's capital, Islamabad, demonstrations turned violent as protesters were pushed back by police with tear gas as they tried to march towards the French embassy.

Crowds of Islamist activists hanged an effigy of French President Emmanuel Macron from a highway overpass after pounding it furiously with their shoes.

In Bangladesh, huge crowds marched in Dhaka to condemn the French leader after Friday prayers, where some demonstrators burned an effigy of Macron.

"We are all soldiers of Prophet Muhammad," chanted the crowd at the city's main protest site.

In Lebanon's capital, Beirut, a few hundred demonstrators marched toward the Palais des Pins, the official residence of the French ambassador, but found their way blocked by lines of police officers in riot gear.

Some threw stones at police who responded with smoke and tear gas.

In Jerusalem, hundreds of Palestinians protested against Macron outside the Al-Aqsa Mosque, the third holiest site in Islam.

Scores more turned out in the Gaza Strip, where the militant Hamas group organized anti-France rallies at mosques across the territory that it controls.

France's hardline response to a string of attacks that French authorities attribute to Islamist extremism has reignited a debate that pits the country's strict secularism and free speech laws against Islamic religious sensitivities.

The country remains on edge after a knife-wielding man killed three people at a church in the southern city of Nice on Thursday. Authorities said the killings were an Islamist terror attack.

Earlier this month, the beheading of a teacher in Paris who showed pupils a cartoon of the Prophet Muhammad, also caused outrage.

Macron has vowed to crack down on Islamic extremism and defended freedom of expression, in defiance of criticism by Muslim leaders and acall by Muslim countries to boycott French products.